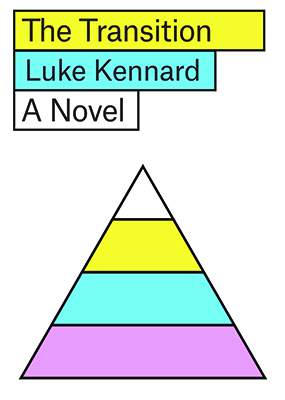 The following is from Luke Kennard’s first novel, The Transition. After committing fraud to cover rent, Karl and Genevieve are sent to the reform program, The Transition, where they'll learn the basics of being an adult. Luke Kennard is the author of several poetry collections and in 2014 was named one of the Next Generation Poets by Poetry Book Society.

Janna and Stu’s house was the second in a row of four Georgian terraces, elegant sandstone buildings with high ceilings and multi-pane windows. The cherry tree in the front garden was in early full blossom. Karl was used to seeing such houses occupied by the offices of accountants or solicitors. It was a secluded street culminating in a Gothic Anglican church, apparently deconsecrated—there were no noticeboards or signs—but well maintained. Even the paving slabs felt antique, broad as tombstones, a ‘superior sole-feel’. Karl and Genevieve stood in the shade with their rucksacks and looked up.

‘I could just sit at the window writing long letters to my detractors all day,’ said Karl.

‘Why did they choose us?’ said Genevieve. ‘I mean really, of all the couples we saw yesterday . . .’

After Stu’s overture they had been separated into breakaway groups and had to share their origin story—how they became Bankrupt Man, Fraud Girl—and then their aspirations. Karl said he wanted to write video games. Genevieve said she’d only ever wanted to teach, but that she’d like to be solvent enough to have children. Although Stu had warned the groups that all the disclosure might feel a bit American, Karl had found it strangely cathartic to hear from other bright young things who’d used loan sharks to pay off loan sharks, or shoplifted cheese, or owed tens of thousands in council tax, or got busted for growing hydroponic weed in their attics. There was a free buffet lunch: big dressed salads, grilled fish, roasted vegetables, and complicated breads. Janna gave a final speech, practical stuff. They learned there were to be six meetings in the Transition HQ, one per month of the scheme. The rest of the time the young couples would live with and learn from their mentors without formal intervention.

A single petal fell from the cherry tree now and landed at his feet.

‘I don’t know that we’re any worse than the rest,’ said Karl. ‘Maybe they liked my face.’

‘I have a very symmetrical face.’

‘Are you two just going to stand there?’ Janna leaned out of the first-floor window. ‘The door’s open—Stu’s made drinks.’

They were sitting in the first-floor living room with gin and tonics. The upper branches of the cherry tree touched the windowpanes. It was beautiful.

‘We’re lieutenants, at most,’ said Stu. ‘Department heads. All of the mentors have a managerial role within the institution—keeps things democratic.We take turns doing the talks. I just like the sound of my own voice, so . . .’ He shrugged.

‘There’s a committee,’ said Stu. ‘If you mean who thought up the whole concept, it came out of a think tank called Bury the Lead. That was twelve years ago. It started very small. There’s a chapter in the book about it. It’s on your tablet.’

‘It’s an interesting history,’ said Stu. ‘Not without a few skeletons in the closet, but we’re in a good place now. We’ve managed to avoid attention, thanks to the whole confidentiality thing—we don’t allow our graduates to acknowledge the scheme in interviews. Why should they? You earned it—The Transition is just a leg-up. Most of them end up successful enough to be interviewed, which is the important thing. Generally they’re only too happy to move on—they’ve earned their right to a fulfilling life, we just gave them the means to start the journey. All we ask is you keep in touch, maybe come back to talk to a future year group.’ He got up. ‘Come on, you must want to see your quarters.’

Karl and Genevieve’s attic was not completely self-contained—cohabitation was stipulated in The Transition’s terms and conditions—but Stu had installed a small but luxurious bathroom with grey granite fittings. The shower head was the size of a frying pan.

‘Ooh, it’s like a hotel!’ said Genevieve. She tried the taps. The bevel was gentle and heavy like a volume knob, and the water poured out with calm insistence.

‘Are you just supposed to know which is hot and which is cold?’ said Karl.‘I can’t live like this. I have no memory for things like that.’

“Karl had found it strangely cathartic to hear from other bright young things who’d used loan sharks to pay off loan sharks, or shoplifted cheese, or owed tens of thousands in council tax, or got busted for growing hydroponic weed in their attics.”

The rest of the attic had been divided into three rooms, one with a double bed and a small flat-screen TV on top of a chest of drawers; one with a sofa, a side table with a bowl of oranges, and a print of Klimt’s Forest framed on the wall; and the last was a study with an old school desk and a new office chair, based on the audience seats in The Transition’s mezzanine.A little bookshelf had already been stocked with Karl and Genevieve’s library of twentieth-century fiction and poetry, the only possession The Transition’s removal service had had to contend with. A tall, bronze Anglepoise lamp lurked in the corner like a prop from a steampunk movie. Next to it a blue Wi-Fi router blinked fitfully.

‘This is actually really thoughtful,’ said Karl, propping the second cardboard box of clothes on top of the first.

‘No more damp,’ said Genevieve.‘I’ll have my fur coats taken out of storage.’

Each room had a VELUX window and the view from the bedroom was of a tree-lined green with a wrought-iron fence and a locked gate. The four tall houses overlooked six parallel streets of Victorian terraces, the ornate and defunct public baths, a cordoned-off area of scrubland promised years ago to a major supermarket, and a hill with a busy road that wove down to the valley. Standing behind Genevieve, Karl put his hands on her waist and rested his chin on her shoulder.

He started working her skirt up and she pulled it down again.

By the end of the scheme, as long as they carefully followed the financial regimen, the young couple should have saved enough for a 5 percent mortgage deposit on one of the new-build estates that sponsored the pilot scheme, as well as having developed the skills and respon-sibilities necessary to meet repayments. He kissed her neck. ‘You don’t even notice the Mohican after a while,’ said Genevieve.

They lay on their new bed, a firm mattress that yielded just enough to make you feel like you were lying in mid-air when you closed your eyes. The bed in their flat had felt like a giant bag of spoons, and Karl was accustomed to arranging his internal organs around them when he slept. He lay on his back, speechless, while Genevieve took her square tablet out of her rucksack. She started to read the History.

‘“Everything was temporary,”’ she read.‘“Because they could be moved on at any time, nobody felt like a stake-holder in their community, so the very idea of community had started to erode. Once, we gathered round the piano in the pub or the town hall to sing songs together in harmony; now we sang at one another in cold-lit karaoke bars, a lonely imitation of the fame we felt was our only possible escape.”That’s by Hannah Eldridge—she was part of the think tank ten years ago.’

She stopped reading out loud and Karl closed his eyes. Both of them were drifting into sleep when they heard Janna at the foot of the stairs.

Dinner was roast squash, pumpkin seeds, and rocket leaves with fresh bread and yoghurt. Stu explained that they weren’t vegetarian but that they ate meat only twice a week. Janna opened a bottle of Rioja.

‘He only ever buys wine wrapped in a wire cage,’ she said.‘He thinks that’s how you tell if it’s good. Look, we’ll talk through some basic rotas and stuff tomorrow, but tonight let’s just have a drink.We’re very happy to have you here. Cheers.’

They were drunk on red wine, lying in each other’s arms.

‘I think we’re going to be okay,’ said Karl. ‘This could actually be the best thing that’s ever happened to us.’

Karl slept lightly and woke up at what his tablet told him was 4:26. He could hear a faint, uneven squeaking noise. It sounded like a pulley being operated.

‘You awake? You hear that?’

‘I’ve been listening to it,’ Genevieve whispered. ‘It’s crying.’

‘What? No, I mean the squeaking noise.’

‘What do you think I mean?’

‘It’s coming from the next attic. Someone in the attic next door is weeping.’

Spooked, Karl turned on the green glass library lamp on his bedside table.

‘It’s pipes or something.’

‘Someone,’ said Genevieve, ‘is crying.’

‘Let me get close—OW! Motherfucker!’ said Karl, falling back onto the bed, holding his foot.‘What is that?’

‘I think they’re broken,’ said Karl. ‘All of them. Who installs a fucking metal buttress in the middle of their floor?’ He went down on his hands and knees and inspected the silver girder he’d dashed his foot against. Difficult to miss, now that he saw it. When his toes felt better he tried to get his ear flat to the low wall, but whatever the noise was, it had stopped.

From The Transition. Used with permission of Farrar, Straus and Giroux. Copyright © 2018 by Luke Kennard.

The Half-Wild Muse: On Writers and Their Cats 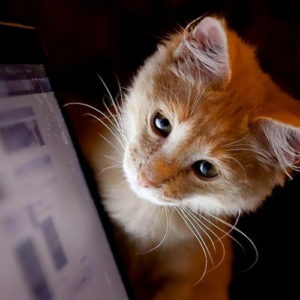 The Half-Wild Muse: On Writers and Their Cats Domestic cats can be disturbing to those who don’t know them. Such people usually call themselves “dog people,” but in reality...
© LitHub
Back to top