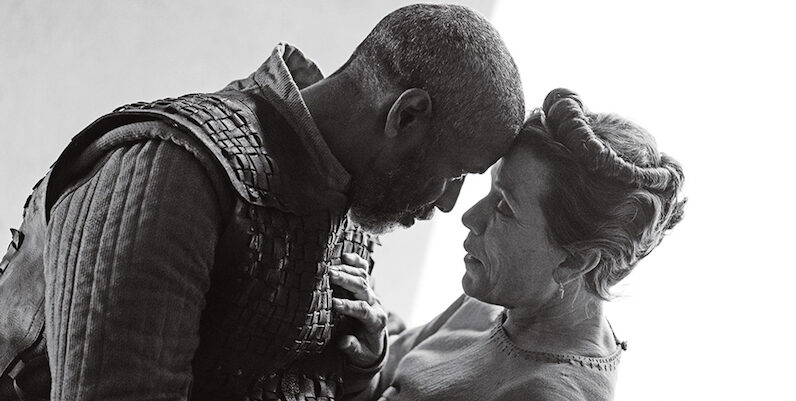 In the flawless, stainless neo-noir Blood Simple, the 1984 directorial debut of Joel and Ethan Coen and the acting debut of Joel’s soon-to-be wife Frances McDormand, a character clandestinely commits a murder in the back room of a Texas bar—an act that sets off a chain reaction of suspicion, guilt, and brutal coverups. In the background, on the bar wall, hangs a clever prop which will reappear numerous times throughout the film: a sign mandating that all employees wash their hands before returning to work—a bit of realistic décor as much as a harbinger of the ramifications to come, for its calling to mind the futile hand-washing hallucinations of Lady Macbeth after she and her husband kill the king of Scotland. In Blood Simple, as in Macbeth, murder is a permanently dirty act, and trying to wipe it away is not only impossible, but also leads to a much greater, much dirtier mess.

Joel Coen’s gorgeous new film, The Tragedy of Macbeth, can be read as a kind of return to Blood Simple, all these years later—it is a co-production between him and McDormand, who plays Lady Macbeth, and for this and many other reasons, it feels a little like an anniversary. But crucially, Macbeth is Joel Coen’s first feature film made without collaborating with his brother, and so it also is a kind of debut. As Blood Simple was for the brothers in 1984, Macbeth is a demonstration of a groundbreaking, brand-new filmmaking perspective. It is also, as with Blood Simple—which is a reworking of The Postman Always Rings Twice, itself a kind of reworking of Macbeth—a starkly fresh take on a story we’ve seen played before us over and over again.

Watching The Tragedy of Macbeth is seeing old lovers in a new way for the first time. Lady Macbeth and her husband (a steely, bearded Denzel Washington) are in their sixties, longtime courtiers, longtime partners. Coen—who in addition to directing wrote the screenplay and co-edited the film—has drawn attention to every single line in Macbeth that underscores how the central couple is childless. He moves one of Macbeth’s soliloquies, in which he acknowledges his childlessness as he is deciding to kill his friend Banquo, to a subsequent scene with Lady Macbeth.

Watching The Tragedy of Macbeth is seeing old lovers in a new way for the first time.

With this newfound dialogue, Macbeth reminds his wife of their childless life; when he reflects, “Upon my head they placed a fruitless crown / And put a barren sceptre in my gripe / Thence to be wrench’d with an unlineal hand / No son of mine succeeding,” the camera catches a close-up shot of McDormand, whose heretofore tough exterior melts for a moment. She nods slightly, sadly, even shamefully when she hears these words—sharing the pain that her husband admits to her.

That Lady Macbeth is clearly beyond menopause seals the finality of their family’s fate, suggesting a very specific motivation for her coercing her husband to murder: in conspiring with Macbeth, pushing him to kill the king of Scotland, it seems that she sees her chance to beget him a legacy, giving him a kingdom since she could not give him a child. (In an earlier scene, in the middle of a firey speech, McDormand pauses to knowingly, sadly dwell on the line “I have given suck, and know / How tender ’tis to love the babe that milks me,” making it clear that this couple is in additional mourning, after having lost a child, their only child.)

McDormand’s two recent Oscar victories—as a gritty, angry mother of a murdered daughter in Three Billboards Outside Ebbing, Missouri and a weary woman who lost everything during the recession in Nomadland—only fuel her hardened performance. The Tragedy of Macbeth emphasizes just how ubiquitous and important “children” are in the original play—rather than tell a story about hubris and power-hunger, it locates a story of heartbroken parents and orphaned children. The irreparable murders in Macbeth are framed as deriving more from grief than simple corruption.

The Tragedy of Macbeth’s cleverness in interweaving themes of young and old, old and new, extends to its tremendous, unforgettable design. The crisp black-and-white film and a squarish frame with an aspect ratio of 1.19:1 evoke the late days of silent film; within this window are elaborate sets that suggest infinite depths of field and play with vanishing points. Cinematographer Bruno Delbonnel’s symmetrical, clean-lined shadows and contrasting perspectives make the whole film look as if Edward Hopper painted Piero della Francesca’s The Flagellation of Christ in monochrome.

The Tragedy of Macbeth’s cleverness in interweaving themes of young and old, old and new, extend to its tremendous, unforgettable design.

The structures themselves merge Medievalism with Brutalism: Macbeth’s castle is made of white concrete walls, with dark wooden beams and simple archways. Everything—from pillowcases to benches to parapets—is grainy, coarsely textured. Nearly every set is adorned with ethereal curtains, filmy scrims, and wilting dark shadows, all calling to mind the German Expressionist films of the 1920s. And yet the film’s scenes are seamlessly stitched together not with dark shadows but clouds of fog. There is almost as much rolling fog in The Tragedy of Macbeth as in Akira Kurosawa’s 1957 take on the same play, Throne of Blood. And the soft, pajama-like Medieval armor and billowing black cloaks recall Ingmar Bergman’s 1957 film The Seventh Seal.

Coen’s rendition flecks the play’s innate Gothicism with Modernism, none more than with the aesthetic of the film’s most impressive character: the three witches, played as a single, replicating person by the great English stage actress Kathryn Hunter. Hooded and howling, slowly contorting her body as she prophesies, Hunter’s witch is a lamenting Martha Graham from the depths.

The film is (from crown to toe) top-full of fantastic performances. It’s almost not worth saying, but few theatrical enterprises are more difficult than performing Shakespeare. These lines, written in an Early Modern form of the English language, have been repeated to the brink of meaninglessness for four hundred years; not only is Shakespeare everywhere, but Shakespeare is also, simultaneously, not automatically decipherable. It is no small feat for a performer to utter Shakespearean phrases as if they are thinking of them on the spot. Coen and the cast of The Tragedy of Macbeth pull off a remarkable accomplishment for the film’s complete clarity alone—none more than Washington, who speaks Macbeth’s lines ever-genuinely. He and McDormand, both angry and grizzled and a bit tired, are a formidable, impressive pair, with believable chemistry, motives, and emotional journeys, qualities all articulated to crystallization.

It is no small feat for a performer to utter Shakespearean phrases as if they are thinking of them on the spot.

But Hunter gives the greatest performance in the film—perhaps the greatest Shakespearean performance I have ever seen—as the avian, spidery, primate-like witch. Formal, even physical, conventions cannot contain her, and in the spookiest possible imagining of Myerhold’s theory of biomechanic performance, she dislodges her body parts from their joints and spools herself back and scuttles about, revealing her nature through movement as much as monologue. She speaks in such an impossible register that it seems Shakespeare’s lines are being exorcised from a creature living inside her body rather than coming from her. Surely she must have a puppeteer or a ventriloquist—but in a neat metaphor for the rest of the film, these forces are internal rather than external.

Macbeth is the story of how a solid shell can be filled up with a new substance. In the second act, Lady Macbeth asks for her own body to be “[filled] with direst cruelty” and for the peaceful night itself to be filled with “the dunnest smoke of hell,” for embodiment of new behavioral possibilities. Indeed, this Macbeth is very much about the physical takeover by “sightless substances,” of letting desires, and emotions, and feelings fully control one’s actions instead. The significance of casting Washington and McDormand, and the five acting Oscars they have between them, is major: Macbeth and his wife are long-respected in their community, esteemed and decorated.

Within the narrative, their familiar, dependable exteriors make possible their giving way to new embodiments. The significance of Coen and McDormand’s helming of the project is also major, as the play is indeed about a husband and wife who spent a long time becoming known for doing things a certain way and are now doing things very differently.

For all the visual and psychological hardness of The Tragedy of Macbeth, it is an airy, smoky, ghostly interpretation, about the mysterious forces that move us suddenly to change the behaviors we have long cultivated: to break partnerships or take existing partnerships to new levels of action, to do things we never thought we would—commemorating  who we were by consummating who we never dared let ourselves become.

Annie Dillard on How Writers Learn to Trust Instinct 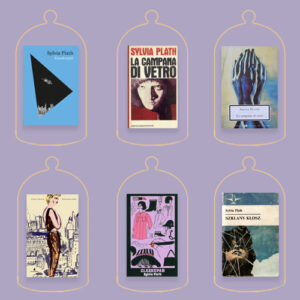 On January 14, 1963, poet Sylvia Plath published her first novel in England under the pseudonym "Victoria Lucas." The book...
© LitHub
Back to top