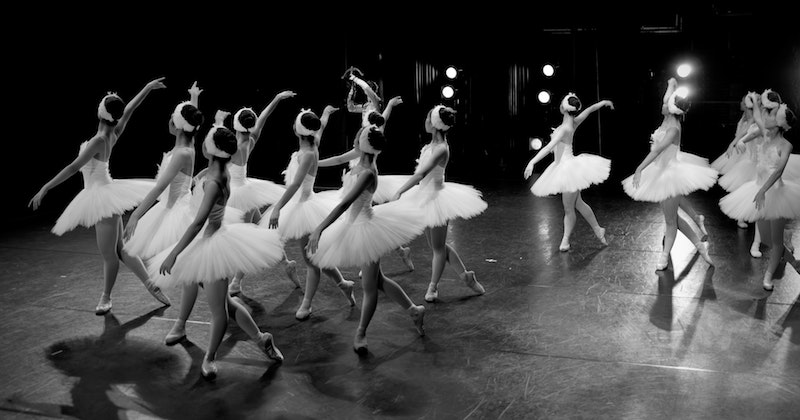 The very things that make dancers well-suited to ballet can be their undoing. Physically, it’s inborn advantages like high arches, shallow hip sockets, and hyperextended knees; mentally, dancers can be undone by the very psychological traits that make it possible for them to succeed in ballet. Chief among these is perfectionism, an entirely necessary trait in a hypercompetitive field that demands near-impossible feats of the human body.

It is impossible to talk about ballet’s mental illness problem without talking about perfectionism, about the inevitable mental and emotional toll of an art form that requires its practitioners to spend hours in front of mirrors, comparing their fallible bodies to an unattainable ideal, and to each other.

In 2003, researchers at Duke University surveyed students about the campus culture, particularly as it was experienced by young women. What they found was that Duke women felt enormous pressure to be socially active—party, drink, date, and hook up—while also getting high grades, participating in extracurriculars, and being beautiful. They were supposed to do all of this without seeming to try at all, without showing the strain, without breaking a sweat. Failure was unacceptable, but so was the appearance of trying to succeed. The researchers dubbed this set of absurd and gendered expectations “effortless perfection.” (Stanford University has its own version, “Stanford duck syndrome,” in which the goal is the appearance of smooth, effortless gliding that’s only made possible by frantic, unseen paddling.)

In the mid-2000s, I was a student at a similarly elite university, no longer working toward a career as a dancer but still rehearsing several days a week with a campus dance company. When I heard the term “effortless perfection,” I recognized the concept instantly. This, I remember thinking, is just ballet. This is what we were taught in dance: to be athlete-strong but artist-unruffled. To work just as hard at concealing the work as we did at the work itself. The goal, as Edward Villella wrote about Gelsey Kirkland, a dancer whose mental illness eclipsed her dancing, was “steel-like legs that are doing the most fantastical feats while the upper body is soft and lovely as though nothing was going on underneath.”

It’s no surprise that attempts to achieve the perfect ballet line can damage the body as dancers try to make their hips and spines and feet and toes do things they were never designed to do. The ideal dancer, in addition to having impossible flexibility and strength, is impossible in other ways, too, and the unending effort to achieve that which cannot be attained damages the mind and spirit.

The relationship between a dancer and her body is a deeply intimate one. Many dancers began taking classes out of a childhood need to improve their coordination, balance, and strength, and those who stick with it are rewarded with all three of those things, along with a deep knowledge of and connection to how their body works. They enjoy exceptional proprioception, awareness of the body’s position and its place in space. By the time she’s dancing professionally, a dancer knows every muscle and has control over each tendon’s tiniest movements.

Many of the dancers I interviewed rattled off explanations of their injuries in the highly technical terms you’d expect from someone who’s spent a great deal of time in a physical therapist’s office learning why a part of their body isn’t working the way they need it to.

Dancers also monitor their appearance in minute detail from day to day or even hour to hour, noticing tiny changes that might be invisible to outside observers but are obvious to someone who spends hours every day moving in front of a mirror. And when you’re lined up in the studio or on the stage with two dozen fellow girls or women, all of you in the same practice leotard or costume, it’s hard to avoid comparing your body to everyone else’s.

Ballet teaches you a way of looking that is hard to shake even after you stop dancing, a way of spotting minute details—minute flaws—and fixating on them until they’re fixed. Years after I stopped dancing, this is still how I watch ballet, noticing the mistakes first and reflexively imagining the correction a ballet teacher would ask for. Long after I stopped moving around in front of wall-to-wall studio mirrors, it is still how I look at myself in the bathroom mirror, noticing the flaws first, incapable of unseeing them, and struggling to see the whole as beautiful until they’re corrected. It’s a kind of all-or-nothing thinking in which the tiniest mistake dwarfs and cancels out everything else.

There is a thrill in the perfectionist discipline that ballet cultivates, a satisfaction to be found in relentlessly asking more of yourself, in practicing until your muscles don’t just remember the right way to do the steps—they can’t forget it.

“I think [ballet] attracts perfectionists,” says psychiatrist Linda Hamilton, a former dancer who now treats dancers, “because if you were not a perfectionist, I don’t think you would be doing the same tendus over and over again.”

“I do think that being a perfectionist is actually a very valuable trait,” Hamilton says, but in ballet, the gap between the ideal and the dancer’s reality can be—or feel—so wide that it becomes too much for the dancer to tolerate. But “the perfectionists that I know who’ve left ballet because it was so painful ended up being the same perfectionists when they went on to a different career,” Hamilton says. “It doesn’t go away. You have to learn to work with it.”

The unending effort to achieve that which cannot be attained damages the mind and spirit.

Marc Philippon, a hip surgeon who treats dancers and other elite athletes, says that the perfectionism that pervades the ballet world can be channeled into productive uses. Dancers tend to be eager to return to dancing as quickly as possible, which can result in their dancing on still-mending injuries—but it can also make them highly motivated and methodical participants in their own recovery. In other words, if you tell a dancer to do her PT exercises twice a day, every day, for a certain number of days, she will follow your instructions to the letter.

This can work in a dance teacher’s favor, too. For example, when Philippon observes that dancer is being trained in a way that is damaging her hips, he takes the opportunity to explain to her, or her teachers, what’s causing her injuries.

“Most professionals in that field… are perfectionists and they are eager to learn, so I feel that if you go up to them and explain to them the basic principles that can lead to injuries, usually they will be very responsive. That has been my experience.”

There is an illusion of control to be found in systematically correcting mistakes, fixing one thing at a time until the whole is polished and beautiful. But there is a difference between discipline and destructive perfectionism. The former is admirable and necessary for success in any fiercely competitive field. And there are forms of perfectionism—“adaptive perfectionism,” for example—that can serve dancers well.

“An adaptive perfectionist,” Dance Magazine’s Kathleen McGuire writes, “has a lot of positive striving toward high standards but is not rigid in their goals.”

If something’s not working, they stop trying to force it and come back to it later, or they accept that, for reasons beyond their control, it’s never going to work.

But destructive perfectionism, in which dancers focus on their failures and see their successes as worthless because of those failures, can make dancing unbearable and push dancers to quit. It’s perfection or nothing. An adaptive perfectionist recognizes that the depth of her hip sockets places anatomical limits on her turnout and works to achieve the best turnout she can without forcing it from the knees, feet, lower back, or pelvic floor. Destructive perfectionism says nothing but 180 degrees will do, however you get there.

But in ballet, the lines between discipline, adaptive perfectionism, and destructive perfectionism are often blurred. Just as dancers feel enormous pressure to dance through pain and injury—to hold on to a role, or a contract, or the good graces of the few people with the power to make casting and hiring decisions—they’re also made to feel, as students and as professionals, that any sacrifice is worth making if it will bring them closer to the ballet ideal.

But perfection, as McGuire notes, is a “horizon that vanishes as you approach it.” And ballet’s perfectionism epidemic leaves dancers vulnerable to eating disorders, anxiety, and depression, and threatens to rob them of both the creativity necessary for making art and the joy that they experience performing it.

Lauren Fadeley Veyette is a dancer at Miami City Ballet whose relationship with her weight left her burned out as a teenager and forced her into a temporary early retirement from ballet. Her case is instructive here. She has never had, she says, the kind of “stick figure” body that ballet gatekeepers insist creates perfect lines. She is “a broad muscular person,” and her build is a genetic trait she cannot alter.

“That’s something I’ve had to deal with my entire career. I still deal with it.” When her teachers and company gatekeepers told her to lose weight, she attempted through dieting—and then starvation—to turn her body into something that it could never be. The exercise achieved nothing but to reinforce a destructive perfectionism that resulted in depression, burnout, and what might have been very early retirement.

And in an ironic twist, the widespread attitude that mental illness is a sign of weakness adds unimpeachable mental health to the list of attributes a dancer must possess in order to be perfect, in order to “make it.”

“The ballerina or the student with an eating disorder—it’s true, but it’s also a cliché, and in a professional company, those dancers unfortunately just don’t last. Or fortunately,” says Sascha Radetsky, a former American Ballet Theatre soloist who is now the artistic director of ABT’s Studio Company. “But they just can’t handle the physical stress if they’re not getting proper nutrition. So they kind of winnow away and you’re left with dancers, largely, with really healthy habits.”

McGuire notes that the ballet world is ruled by a ruthless logic best encapsulated by a common response to her own writing about why she quit: “Dance isn’t for everyone.” Some people can’t hack it, and they don’t survive. “This may as well be a mantra in the dance world. We have become entrenched in the Darwinian notion that the emotionally weak will be weeded out. There is no room for them anyway.” 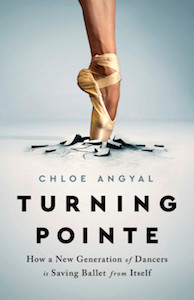 Adapted excerpt from Turning Pointe: How a New Generation of Dancers Is Saving Ballet from Itself. Used with the permission of the publisher, Bold Type Books, an imprint of Hachette Book Group, Inc. Copyright © 2021 by Chloe Angyal.

Chloe Angyal is a journalist from Sydney, Australia. She is a contributing editor at MarieClaire.com and her writing about politics and culture has appeared in the New York Times, Washington Post, Atlantic, Guardian, and New York Magazine. She holds a BA from Princeton and a PhD in arts and media from the University of New South Wales. She lives in the Iowa City area. 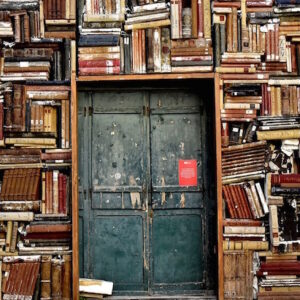 “The world is a really interesting place, and making art is a way of being in the world. I don’t really know how else...
© LitHub
Back to top
Loading Comments...