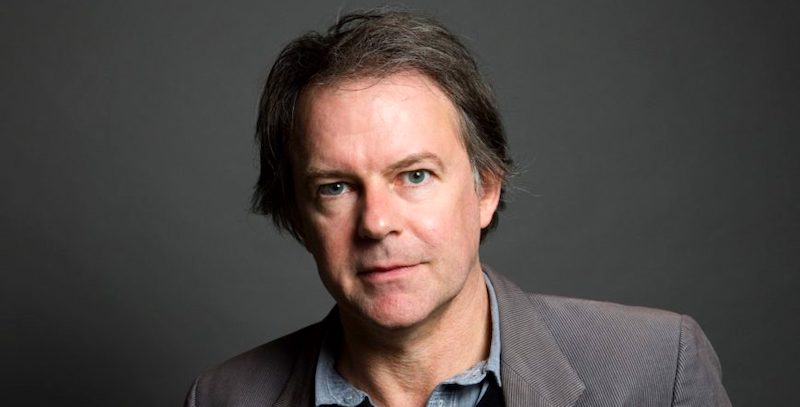 The title of Yannick Haenel’s novel came from none other than Marcel Proust.

Next in our series of interviews with the shortlisted nominees for the 2020 Albertine Prize is Yannick Haenel, author of Hold Fast Your Crown, translated from the French by Teresa Lavender Fagan.

Haenel is the author of several novels, including The Messenger, which was published in France under the title Jan Karski and won the Prix Interallié and the Prix du roman FNAC in 2009. In 1997, he co-founded the avant-garde literary journal Ligne de risque.

Can you tell us how you chose the title of your book?

Without really knowing where I was going, I wrote the story of a guy who left for New York to meet his favorite filmmaker—Michael Cimino—and who was obsessed by the idea of failure: he was afraid to let his life pass him by, but he felt that in failure there is a hidden truth, even a secret success: so that what society judges to be failure often masks a victory. This guy—my narrator—thought of Herman Melville, who had certainly been the victim of this error: he was considered a poor writer even though he authored Moby Dick!

In short, I wrote this story, but I didn’t have a title. After about fifty pages, I stumbled upon a short phrase in Proust’s Carnets which said, which said to me, lost in this improbable story of a mystical cinephile loser: “Hold fast your crown.” This phrase really brought me a breath of fresh air, it made me smile, and I began repeating it to myself each morning as I went to write my novel on the bench of a café in the 20th arrondissement of Paris.

And then one day, as my book began to talk about the film Apocalypse Now, I had reopened Bossuet’s excellent translation of The Book of Revelations, and I once again stumbled on this short phrase, so it was part of a sacred text, it came from Revelations—Proust had simply cited it without quotations, no doubt to give himself some courage by telling himself, “Hold Fast Your Crown.”

I began to understand that despite their misadventures, despite their sea of fantastic problems they were victims of, Melville, Cimino and even my narrator were kings—kings without kingdoms, kings who reigned over nothing, kings who had lost their crowns. I thought: that’s my title.

Your hero, Jean Deichel, has nothing, and passes his days drinking on his couch while tirelessly watching two films, Apocalypse Now and The Deer’s Hunter. What is the nature of his realm?

The object of Jean Deichel’s dispossession is initiative: behind the extraordinary story of this semi-alcoholic who loses the dog he’s watching, there is a spiritual world, which he seeks to access. His kingdom is the opposite of society, it’s one that is glimpsed through the forces of libations, looking out for hidden signs, the obsessional apparition of stags in films or the flicker of animals who pass through cities. It’s the double of reality, mystical, poetic. In this magical alternative, one truly believes Isabelle Huppert, and one encounters a woman who resembles the goddess Diana, and who, in a sense is  the goddess Diana.

The number 3—the prime example of a magical number—structures your novel in three parts: Films, Stories, and Names. Can you explain how you came to this composition?

The structure came bit by bit as the facets of the story unfolded, but it’s true that this characterization of threes raises the idea of initiation, as if one passed through the gates, and incrementally achieved an increasingly profound reality. Three chapters is a universal composition, no? When it comes down to it, I play with that idea: that films, stories, and names make us who we are. We identify with them; they transform us and save us. A world without film, without stories, without this enchanting list of names they contain would be the end of humanity.

Across multiple twists that combine the comical and the sublime, Jean Deichel’s quest appears constantly gauged between the pursuit of the truth and its representations (Melville’s white whale, Cimono’s doe) and the possibility of evil. Are these the two poles between which literature finds its expression?

Yes, literature is a magnetic space, full of spells, where we tell the stories that make sparkle, whether we want to or not, the most important things, that which animates our desires and our fears. You’re right, good and evil, that’s it. Better than philosophy, novels speak of nothing else. My narrator is in search of truth, and he gets lost on the way, precisely because his quest is absolute.

What is the book that opened the doors for you to writing?

When I was young, Moby Dick. A bit later on, Rimbaud’s Illuminations and then The Idiot by Dostoevsky, which was a shock.

In 2002, I was writing a long novel that would become Circle. At the time I was teaching in the suburbs. It had been sixteen years that I took the train into the suburbs to go the middle school. One morning, on the platform, I didn’t board the train, I could only think of the page that I was in the middle of writing. I never went back. Who told me not to board the train? I don’t know. But it was the best advice I received in my life.

Who are the contemporary writers that you admire?

If you could make anyone read your book, who would it be?

Let’s be crazy: Buster Keaton and Saint Francis of Assisi

I write by hand. So I imagine that the page is already written, and I trace over it to make the words appear.