The Time My Grown-Up Novel Was Marketed As Young Adult

On the Ever-Blurring Lines Across Literary Genres

My novel was initially pitched like this: Emma Bloom is a college student who returns home to Westchester during winter break to find that her mother is in the throes of a psychotic episode. Emma spends the next month learning how to navigate her mother’s illness and the impact it has on her life and her relationships. I wanted to explore the toll that mental illness takes on a family, and more generally, what it means to love somebody who is sick.

The first agent I spoke with said the novel would be a great fit for “new adult,” a then-burgeoning category created by St. Martin’s Press in 2009, as a sort of “older YA.” But Melissa, the agent who ultimately represented me, was pretty confident—given the subject matter and the fact that the book was peppered with both casual drug use and casual sex—that The Law of Loving Others was an adult book. I was relieved to hear her say it. There are so many novels I love that fit into this category of “literary fiction” with teenage protagonists; Curtis Sittenfeld’s Prep, Jo Ann Beard’s In Zanesville, Mary Miller’s The Last Days of California. Not having read much YA myself, I didn’t know what the term meant exactly, but I knew what it didn’t. To me, all YA suggested was that I had failed, in some critical way, to captivate an adult audience. (To be sure, there are lots authors who write intentionally for a younger audience or want to connect specifically with teens, I’m just not one of them).

Editors at nearly every major publishing house disagreed with my agent. Of course there were some who simply weren’t interested, but those editors who were expressed a similar complaint: Emma was too young. Perhaps the content was serious, but the voice was that of a teenager. Who would read the book? How would it be marketed?

Melissa then suggested I change college to boarding school so that the book could be marketed to a younger audience. I didn’t want to change the story and I could feel myself bristling against the YA term. I was also annoyed for feeling that way—was I succumbing to some snobby, pretentious prejudice against literature for young people? But the reality of my disappointment was simple: I was deflated by the suggestion that adults wouldn’t want to read the book, that it somehow was not sophisticated or serious enough to appeal to them.

Despite my ambivalence, I believed that if the heart of Emma’s story remained unchanged it wouldn’t matter how the book was marketed. I ultimately agreed to make the changes and two weeks later Razorbill, an imprint of Penguin, bought the book. They were wonderful; the editors appreciated its edge and were careful not to morph the novel into a saccharine after school special. Razorbill didn’t even object to the line of cocaine that Emma inhales on Christmas Eve! Or the casual reference to road head that her boyfriend makes after they’re involved in a minor car accident. I was happily surprised throughout the editing process, and aside from the font and typeset used (large and spacious), there was really no clear indication to me that the novel was different than one marketed to adults.

The conversations about YA and adult fiction have been many and intense over the past few years, but it bears repeating that 40 years ago this genre distinction did not exist—and now it’s a crucial marker when determining a book’s trajectory in the world. Of course there are exceptions—Rainbow Rowell’s books, and series like Divergent and Hunger Games—books that seem at home in both worlds. And I hoped (fantasized, really) that The Law of Loving Others would achieve this sort of rare and magical crossover status. Teenagers would identify with Emma’s struggle and adults would reflect back, nostalgic for the naïve and id-driven version of themselves.

The Law of Loving Others came out in January, 2015 and (like many or even most books) gained little traction, not making much noise in either market, critically or in terms of sales. My publicist had sent the galleys to a plethora of media outlets: the women’s magazines, pop culture sites and literary ones. Aside from the trades, only one magazine was interested—Justine (a “lifestyle magazine for teen girls with a real girl focus.”) This is not to suggest the book’s lack of success owed simply to its categorical ambiguity, but it was a consistent issue raised by readers, magazine/blog editors, and Goodreads reviewers alike. Given its content and tone, it was too old for a young adult crowd, but its YA branding was off-putting to outlets that may have otherwise been interested. As one blogger succinctly put it: “This isn’t a YA novel for teen readers. While it’ll appeal to teen readers, it’s a YA novel for adult readers or, more realistically, it’s an adult novel with teen main characters.”

Talking to writers and editors I knew, it became clear that my experience was actually fairly common. I wrote to Peter Cameron, whose stories have been published in the New Yorker and the Paris Review for years, and whose novel, Someday This Pain Will Be Useful to You, was marketed as YA by FSG. A veteran in the business, Mr. Cameron empathized with my bewilderment, “my experience with the YA thing was much the same as yours,” he said, “frustrating and somewhat confusing.”

Earlier this summer, my editor emailed me saying Razorbill had decided to change the cover for the paperback edition, hoping to attract a more adult audience this time around. The paperback edition is definitely more striking: it’s brightly colored and features a young woman whose hair is a bit disheveled, her lips open just slightly, her gaze provocative. But still, a publicist told me, asking adults or adult media outlets to pay attention to the book is going to be an uphill battle. “Most literary types aren’t going to buy your book,” he said, “and it’s not actually for teenagers.”

I was strangely relieved to hear him say this. Assuming it was true, it was validating (albeit depressing) that so much of my book’s reception from the world was determined by marketing, its fate largely dependent on what section of a bookstore it’s placed in. These labels sometimes feel so random and subjective, and yet how and why a publishing company decides to label or market a book, will dictate its future enormously. I just finished reading Maggie Nelson’s beautiful and amorphous book, The Argonauts, and was struck by this line: once we name something… we can never see it the same way again. That was and continues to be my worry about the label of YA, that it would brand my novel, that adults would see it and ultimately write it off because of its placement in a bookstore. And the designation seemed so arbitrary! Perhaps it would’ve been easier for me if there was some crib sheet I could have referred to, a way to know, with certainty, which category my book fit into.

Though many people I spoke to (particularly those who have been in publishing for a long time) noted that the barriers between YA and adult literature have grown increasingly fluid. Sarah Barley, a senior editor at a new division of Macmillan called Flatiron Books, comes from a YA and children’s publishing background. She was hired by Flatiron to build “a YA fiction list at a new publishing house on the flagship list, not a separate children’s or teen list.” YA books, she told me, are an integral part of their fiction program. “My goal,” she said, “is primarily to publish YA books for young adults and a crossover audience.” Essentially, Ms. Barley is looking to blur the line, to acquire books that resist and challenge one label or another.

It can be done. In 2008, Margo Rabb wrote an essay for the New York Times in which she described how upon trying to sell her first novel, her agent emailed her to say there was “good news and bad news.” The good news was that there was an offer from Random House, the bad news was that it was from a YA imprint. Ms. Rabb’s two novels have been widely praised, and she’s been able to straddle both literary worlds in an inspiring way. I asked her about the struggles of writing books that are written for everybody but only marketed for some. Ms. Rabb responded, “I think that the problem with corralling books into categories is that people often look down their noses at one category or another, or dismiss whole genres because they assume a book is aimed at a younger, older, or different kind of reader. I think that the best books often resist categorization and don’t fit neatly into any genre. This is what’s on my night table right now: a stack of picture books by David Wiesner; a book of essays by David Foster Wallace; Rebecca Stead’s new novel, Goodbye Stranger; and a collection of short stories by Lucia Berlin. All these books deserve equal respect, and I love them all.”

Ms. Rabb put it perfectly. There are so many books (the aforementioned The Argonauts included) that don’t fit precisely into one category or another; they are at once mysteries and literary fiction, biography and memoir. Observing the inner-workings of marketing and publicity departments has been liberating in some sense because it’s allowed me to be more generous and broad when choosing new books, ones that I would’ve been less likely to pick up prior to this experience. It’s impossible to know if the paperback campaign for my book will be any different than the hardcover, if it will somehow magically transcend its YA shelf in the bookstore. But moving forward as a writer, I will try to continue much in the same way: not writing for any particular audience or age group in mind, but telling a story for anyone who will listen.

Kate Axelrod was born and raised in New York City. Kate has written for Nerve.com, The Nervous Breakdown and various other publications. She lives in Brooklyn and works as an advocate in the criminal justice system. The Law of Loving Others, her debut novel, is out now in paperback. 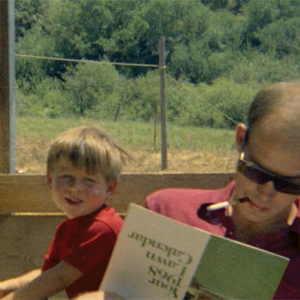