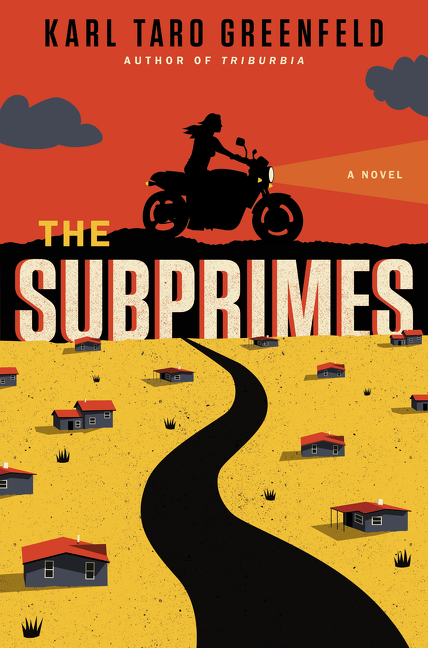 The following is from Karl Taro Greenfeld’s The Subprimes, a dystopian parody set in a financially apocalyptic future America. Greenfeld is the author of seven previous books, including the novel Triburbia and the memoir Boy Alone. His writing has appeared in Harper's Magazine, The Atlantic, The Paris Review, Best American Short Stories 2009 and 2013, and The PEN/O. Henry Prize Stories 2012.

While I’m walking to my office, down the narrow, putatively charming streets, Iliff, Albright, Bashford, lined with two story cape-cod-style houses, the bulk of these monstrosities too big for the lots, crowding out the vestigial front yards so that they are too small for any children to play catch on, let alone mount a three on three touch football game, if any children can be induced to look up from Playstation 7 or X3-Box long enough to consider an actual sport involving sticks and balls instead of VR goggles and gamer gloves, I see jogging past me a woman, attractive, freckled face, tanned clavicle, lycra T-shirt. She wears head phones, of course, and sunglasses and runs on her toes, her skin-tight jodphur-like trousers making swishing noises as she passes. And behind her trails a pointy-snouted dog, sharp-eared, high, curled tail, tongue hanging from a mouthful of glistening teeth. No collar. Grey and rust coat. The canine regards me warily as it trots past. It takes me a few seconds but . . . that’s no dog.

That’s a coyote. In high-morning, a full six hours past its bedtime. And this nasty creature is padding along, stalking, apparently, a jogger.

What did I say? About end times?

Her headphones drown me out.

The two of them, jogger and coyote, are moving too fast. I hesitate to give chase.

But I turn, trot after them, waving my hands, the coyote turning to watch me for a moment, as if to confirm, yes, a human is chasing me. Ah the hunter is now the hunted!

The dog’s eyes are green-brown, pupils slit and appraising, also inquisitive: as if, is this guy, this man, this biped, serious?

He yips. High pitched, followed by a long, drawn out growl that sounds almost thoughtful.

Who does this mutt think he is talking to? I retain the pride in being homo sapien, still ruler of this planet. The coyotes are inheriting the earth, of course, up to 20 pups a litter, vast tracts of foreclosed homes to thrive in, their only natural predator, the mountain lion, having been driven to extinction. And for years, they’ve been growing fat on cats, who themselves are in danger of extinction. They’ve moved up the food chain and lately increasingly have been attacking humans. But can’t you, coyote, wait just a decade or two? Then all this will be yours.

Then from behind me I hear clicking noises, paws and claws on concrete, and I turn and see trotting on the road behind me another pair of coyotes. And making fast progress beside me on the lawn above a white retaining wall is another. They all run in the same tongue-dangling-from-mouth manner, and they look past me, as if they aren’t interested in me at all, as if they are just having a little trot, a mid-morning constitutional.

Yet we, I, am being hunted. Did coyotes begin hunting humans in broad daylight when they ran out of cats?

When I turn back, the coyote in front of me is gone and I see the jogger’s shapely posterior just a few feet ahead of me. I seem to have accelerated.

I can pass the woman, leave her to her fate, but instead I decide to stop her and warn her of the situation. Perhaps we can trot to my house, or to my car, drive somewhere to have coffee, laugh about our moment in the food chain.

But when I reach out to touch her arm, she jumps and slows down, removing her headphone from one ear.

“Coyotes,” I say, and jerk my thumb over my shoulder.

She looks over her shoulder. “What are you talking about?

I look back again.

The animals have vanished.

I suddenly see the situation from her point of view: bedraggled, somewhat hairy pedestrian comes out of nowhere and accosts her, claiming a nocturnal animal is stalking her at 11:00am.

Her right hand comes up with a pepper spray bottle which she fires at my head.

“Fuck you Subprime,” she shouts and runs ahead.

My face hurts, the inside of my nostrils, my throat, my esophagus, my larynx, my mouth, my tongue, everything is stinging, burning as if I have been submerged in Tabasco. And the more I breathe, the more I burn.

I lie down on the grassy berm between the curb and the sidewalk, trying to take shallow breaths, trying not to breathe at all, waiting for the pain to subside.

But it never really does.

From THE SUBPRIMES. Used with permission from HarperCollins. Copyright © 2015 by Karl Taro Greenfeld. 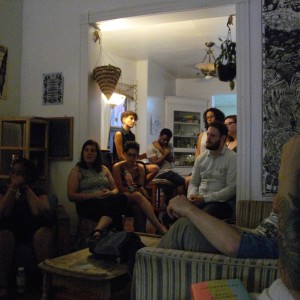