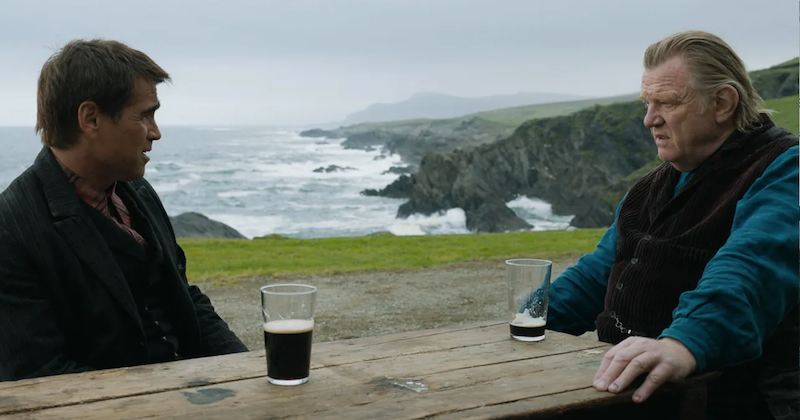 The spiritual sequel to In Bruges has arrived.

If you’ve got a teen or preteen at home, you’re probably sick to death of hearing them talk about The Banshees of Inisherin, the long-awaited film version of the third installment in Martin McDonagh’s uncompleted 1990s “Aran Islands Trilogy” of plays.

I keep having to confiscate cell phones because the kids won’t stop Googling “Has the Banshees trailer dropped yet?” during class, has become a common refrain among weary teachers nationwide.

“Cindy keeps skipping school to attend off-off-Broadway productions of The Cripple of Inishmaan and The Lieutenant of Inishmore,” one distraught parent told me last week. “She says she needs her fix. I wish they’d just release the Banshees trailer already; I’m at my wits’ end here!”

“Billy refuses to speak in anything but a grotesquely-heightened J.M. Synge-meets-Quentin Tarantino early-20th century Stage-Irish vernacular,” another lamented. “He completely ruined his Bar mitzvah last month.”

Well, let me just say that I understand what you and your children are going though. I myself have been waiting 16 long years for this project to come to fruition, ever since I attended a (in hindsight, probably terrible) college production of McDonagh’s breakout play, The Beauty Queen of Lennane, in Dublin in 2006.

For the uninitiated, a decade before he became an Oscar-winning filmmaker, the polarizing McDonagh (In Bruges, Three Billboards Outside Ebbing, Missouri) shot to fame in the mid-to-late 90s as the enfant terrible of the British and Irish theater scene, rattling off no less than five critically-lauded plays in as many years—all grotesqueries set in and around Connemara in County Galway, where he spent his holidays as a child. The proposed sixth, The Banshees of Inisheer, which would have closed out the Aran Islands Trilogy, was shelved by McDonagh, who said at the time that it wasn’t very good but that he would consider returning to it at some stage in the future.

Well, friends, I’m happy to report that the future is now. In a different medium, with a different storyline, and a slightly different title, Banshees has finally arrived.

The film, a pitch-black “break-up story” set on a remote island off the west coast of Ireland, against the backdrop of the Irish Civil War in 1923, reunites McDonagh with Brendan Gleeson and Colin Farrell, who played conscience-plagued hitmen in the director’s 2008 breakout (and best) film, In Bruges.

As succinctly, and rather poignantly, described by Alison Foreman in IndieWire earlier today, the setup is this:

Farrell plays Pádraic, a contented man whose chipper attitude is often accompanied by an adorable miniature donkey [italics mine] named Jenny. Opposite him is Gleeson as the curmudgeonly Colm, who inexplicably turns his back on the friendly Pádraic one day, claiming: “I just don’t like you no more.”

What follows is descent into acrimony, paranoia, and fiddle-playing finger-amputation, as poor Pádraic becomes obsessed with figuring out why his best pal has so cruelly and abruptly rejected him.

I, like America’s youth, am beside myself with anticipation.

Let’s hope Colin, Brendan, and Jenny the miniature donkey don’t let us all down.

The Banshees of Inisherin will premiere at the Venice Film Festival on September 4, and hits theaters October 21.