Allison Adair on Grief, Dalí, and a Painting of Peasants

It’s hard to imagine Salvador Dalí halting a locomotive to let a duck pass. His way of engaging the world, while dreamy, always seemed to me far from subtle, his influences some melted tangle of Fra Angelico + plastic paratroopers + stemmy weed brownie. Shocking it was, then, to learn how “spooked” Dalí claimed to be when, as a child, he happened upon a reproduction of Jean-François Millet’s drab painting L’Angélus.

L’Angélus depicts a peasant couple pausing in their fieldwork to bow heads for the angelus—an evening prayer that commemorates Gabriel’s annunciation visit with the young Virgin Mary. Bells thrum convincingly from a steeple in the background—maybe too convincingly. In 1864 the painting’s owner, a Belgian minister, opted to trade the piece for something with fewer explicit reverberations. L’Angélus was a masterpiece, the minister conceded, but those bells, those bells: “The constant ringing just became tiresome.”

Though the painting had been celebrated for nearly a century in increasingly grand terms—first as an homage to the humble, even sentimental, piety of the rural poor, and later as a clamorous commentary on labor and social class—Dalí, erect-mustachioed and alarmed to a Vincent Price degree, heard a quieter rustling: less –ism, more loss.

The young surrealist, born exactly nine months after the death of his older brother (also named Salvador), insisted that the drama of Millet’s scene wasn’t so highbrow. It was a simple field funeral, he declared, two people letting go of something only they had ever known. The basket of potatoes in the painting, well, as another surrealist said, “Nothing that surrounds us is object—all is subject.” Of course no one listened. How could such a muted human moment, something unseen, invisible, underground and unexpressed, ever compete with the Theories, the Big Ideas, with those overwhelming Bells?

After my first miscarriage, one of the questions for which I had no answer was what to do with the physical mass my body no longer held. Products of conception: the doctor’s phrasing. He was tall, basketball tall, too big for the cramped space of the ultrasound room. The day before, as if I were a spectator, I’d watched a heartbeat flicker inside the screen, a silent film I still see from time to time.

I, and my poems, have a tendency to look down, to read the ground for what it holds, what’s been buried or sown, abandoned, compressed into coal.

There was a beautiful carved box, airtight but wood, a silk drawstring pouch emptied of its pearls. We walked to the reservoir near our apartment. People spoke to each other about their daily concerns as we passed, an invisible procession. We climbed the path into a small copse of trees overlooking the water below. A glossy black wrought-iron bench was bolted to cement posts buried deep in the ground. Maybe you’ve sat there before.

Millet and Dalí had complicated relationships with religion. Millet’s spiritual sense was tethered to the earth, while Dalí’s floated along the logarithmic spiral. But for both men, mysticism pulsed everywhere. The Catholic France and Spain of their lifetimes relied on metaphor upon metaphor. Nothing could be itself only; no object was innocent.

In colonial New England, the brimstone Protestant revivalist Jonathan Edwards had introduced a glossary of correlations, tidy similes for bridging the natural and spiritual worlds: rose and thorn signified Christ and our challenging path toward him, snakes and birds were “images or shadows of” the devil and our souls.

The American Transcendentalists would later seek to overcome these analogies—and their implicit hierarchy, one merely a conduit to the other—by preaching less one-to-one correspondence and more universal oneness: nature not as symbolic of God but as God.

In a way, this was nothing new for Catholics, who’d been upping the ante from simile to metaphor for centuries. It marked the difference between the intellectual safety of comparison and the reckless faith of equivalence, a mystical illogic. The bread and wine weren’t just representations—they were Christ’s body and blood.

Some Sundays my parents drove us over the border from Pennsylvania into Maryland, to attend Mass outdoors at a small grotto in the Catoctin Mountains, a low range of the eastern Appalachians. The unusual outcropping inspired its own geological term: catoctin, a knob or ridge that preserves on its summit remnants of an older peneplain.

In other words, long after the clash and clatter of tectonic plates have produced a mountain, and once erosion has filed that mountain back down to plain, something punches through, uplifting part of the flat bottom rock into a new peak. What’s long buried returns—as if a cosmic till had turned the earth. So the lowest shall be highest.

A campanile marked the grotto’s entrance. From time to time bells rang out, bouncing off cliff rock before settling into pastureland below. The site was built to simulate Lourdes, a cave in Southern France where, in 1858, the same year Millet was hard at work on L’Angélus, a young miller’s daughter named Bernadette perceived apparitions of the Virgin Mary. At the Maryland shrine, a statue commemorates these visits, Mary’s eyes gazing skyward from a half-shell curve cut into the stone. On a knoll opposite, plaster Bernadette kneels in awe.

By the 1980s, the time of our Sunday visits, a long gravel path led the way. A few yards in stood a round pond, maybe 20 feet across, rimmed with black iron fencing. Thick vertical spears topped by arrowheads gestured upward. In the center of the pond, another statue of Mary stared, upward. Old trees above soughed and swayed in a loose leafy knit, drawing the eyes upward. But at the bottom of the shallow pond, greening yet intact, a newspaper lay. With each visit, I expected its disappearance, but impossibly, it was always there.

Newsprint is composed of cellulose, so it doesn’t dissolve as easily as one might expect—but back then, this seemed to me some kind of miracle. Whose was it? From when? What were the headlines that day? I would squint my eyes and try to decipher vague black shapes on the twice-folded front page. I never could. The best I could do was imagine a day like today, dappled light, laughter or fright, someone distracted, losing his grip, letting go. I felt I knew this person. Before long, my parents would pull me away, up the path, toward the cave, to pray.

Even now I, and my poems, have a tendency to look down, to read the ground for what it holds, what’s been buried or sown, abandoned, compressed into coal, brined then spat out as silver, mined, fracked, pushed down or painted over.

The instinct has roots. Growing up in Gettysburg taught me that lots of stories live under us, undetectable, underground. Back then as many as 5 million visitors tramped through Gettysburg annually. Men with metal detectors knocked on doors well beyond the battlefields, doors like ours, asking to scan for whatever churned below us—musket balls, ring-tailed bullets, buttons, belt plates. What lived above ground was at best irrelevant.

I’d been there—here—before, this ordinary loss, an obscurity, a grief unprovable, bent under the weight of quiet unmaking, of nonexistence.

The first time a man handed me the recently-minted coins he’d found in our yard, I didn’t understand—he didn’t want actual money? A few days earlier my sister and I had buried my hermit crab under the apple tree. Later that summer we’d corral infant rabbits back into their nest after they’d been startled by the mower.

None of these stories fit Gettysburg’s legend. They fall to the ground and settle there, accumulating dirt and weight and mass until they cease to be stories at all. Or until someone digs down enough to find them.

In front of Millet’s L’Angélus, I forgot I was in one of Paris’s great museums, a former train station 4,000 miles from Gettysburg. I felt as if I’d stumbled upon an old family photo, from a time I’d almost lost. I’d been there—here—before, this ordinary loss, an obscurity, a grief unprovable, bent under the weight of quiet unmaking, of nonexistence, like hearing only silence when you listen for breath. Potatoes, yes. Of course. They’re there—it’s undeniable. But what stirs beneath them, beneath their handwoven basket? Dirt or dust? Which prayer answered, which unmet? Wireworms, dry rot, rock, or root?

By the 1960s Dalí had acquired enough influence to insist on a review of Millet’s painting. To humor him, the Louvre arranged for X-rays. These were held to the light. Beneath the basket, angles of a small, tapered box surfaced. 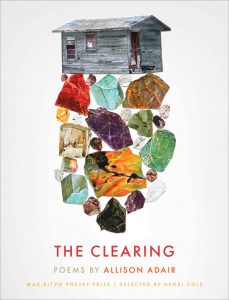 Originally from central Pennsylvania, Allison Adair now lives in Boston, where she teaches at Boston College and GrubStreet. Her poems have appeared or are forthcoming in American Poetry Review, Arts & Letters, Best American Poetry, Best New Poets, Kenyon Review Online, North American Review, and ZYZZYVA, among other journals. Allison is the recipient of the Pushcart Prize, the Florida Review Editors’ Award, the Orlando Prize, and first place in Mid-American Review’s Fineline Competition. She holds an MFA from the Iowa Writers’ Workshop. She is the author of the Max Ritvo Poetry Prize-winning collection, The Clearing.

Delight is Essential: On Reading Ross Gay in Terrible Times 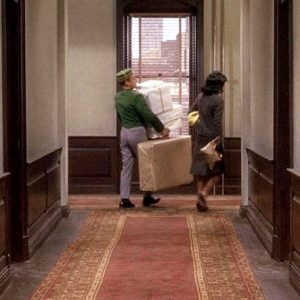 Give them pleasure—the same pleasure they have when they wake up from a nightmare. –Alfred Hitchcock * A summer...
© LitHub
Back to top
Loading Comments...