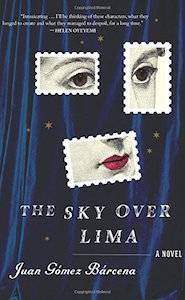 The following is from Juan Gómez Bárcena’s novel, The Sky Over Lima. Juan Gómez Bárcena is the author of numerous essay, short story, and poetry collections, for which he's received the José Hierro Prize for Poetry and Fiction, the International CRAPE Prize for stories, and the Ramón J. Sender Prize for Narrative, among others. The Sky over Lima is his first novel. He lives in Madrid.

At first it’s just a letter drafted many times: Dearest friend, respected poet, most esteemed sir, a different opening for every sheet of paper that ends up in a crumpled ball under the desk, glory of Spanish literature, most distinguished Ramón Jiménez, peerless bard, comrade. The next day the mulatta servant will sweep up the wads of paper scattered across the floor, thinking they’re the poems of the young master of the house, Carlos Rodríguez. But the young master is not writing poems that night. He smokes one cigarette after another with his friend José Gálvez, and together they mull over the exact words to use in writing to the Maestro. They’ve searched for his latest collection in every bookshop in Lima and found only a dog-eared copy of Violet Souls, which they’ve read many times already and whose lines they know by heart. So now they jot down grand words that a moment later sound ridiculous: Noble friend, immortal scribe, our most intrepid revitalizer of literature, might you, in your infinite kindness, offer a small courtesy to us, your friends across the Atlantic, your ardent readers in Peru — who follow your verses, Don Juan Ramón, with an admiration of which you may be unaware — might it not be too onerous an imposition on our part to humbly ask that you vouchsafe to us a copy of your most recent book, those sad arias of yours, impossible to find in Lima; might it not be an abuse of your generosity to hope to be granted that consideration even though we have not included the three pesetas that the book costs?

When their energy flags, they drink pisco. They open the windows and look out on the empty streets. It’s a moonless night in 1904; the boys are just twenty years old, young enough that they will live to see two world wars and celebrate Peru’s triumph in the Copa América soccer tournament thirty-five years from now. But naturally they know nothing of all that tonight. They just crumple up one sheet after another, searching for words they know they’ll never find. For with the last letter they toss to the floor, they realize that they will never acquire their signed copy of Sad Arias: however much they address the poet as an eminent dignitary of literature and the great hope of Spain and the Americas, they will receive not a single line of correspondence in response if they confess that they are only two young masters playing at being poor in a Lima garret. They must embellish reality, because in the end that is what poets do, and they are poets, or at least they’ve dreamed of being poets on many late nights like this one. And that is exactly what they are about to do now: write the most difficult poem of all, one that has no verses but can touch the heart of a true artist.

It starts out as a joke, but then it turns out it’s not a joke. One of the two says, almost idly, It would be easier if we were a beautiful woman, then Don Juan Ramón would put his entire soul into answering us, that violet soul of his — and then suddenly he stops, the two young men look at each other a moment, and almost unintentionally the mischief has already been made. They laugh, congratulate each other on this inspired idea, exchange slaps on the back and two more glasses of pisco, and the next morning they meet up in the garret again with a sheet of perfumed paper that Carlos has remembered to pilfer from a sister’s desk. Carlos also takes care of the writing; his schoolmates used to tease him about his feminine handwriting, the letters soft and round like a caress, and the time has finally come to put it to good use. Whenever you’re ready, Señor Gálvez, he says, stifling his laughter, and together they begin to sound out those timeless words that require only a sheet of fine paper and a writer with a womanly hand — a poem with no verses, which will appear in no anthology, but that is poised to do what only the best poetry can: name what has never existed before and bring it to life.

From those words Georgina will be born, timidly at first, because that’s how they write her: a young lady from Miraflores who sighs over the poetry of Juan Ramón and whose artless sincerity makes them laugh during their pauses. A girl so ingenuous she can only be beautiful. It is she who requests a copy of Sad Arias, she who is so ashamed of her own audacity, she who begs the poet to understand and to forgive her. Only the signature is missing, and with it a last name, sonorous and poetic, that the two finally agree on after a debate so long that both the liquor and the pastries run out: Georgina Hübner.

And Georgina begins as simply that: a name and a sealed letter that will travel from hand to hand for more than a month, first in the bodice of the illiterate housemaid, then in the pocket of a lad who charges half a sol and a pinch of the maid’s broad buttocks for the errand. It will then pass through the hands of two postal workers, a customs official at the docks, and a sailor, and thence to the steamship covering the Lima–Montevideo route in a sack of letters in which bad news predominates. From Montevideo, an unnecessary detour to Asunción, thanks to a negligent postman only thirty days from retirement whose eyesight is too weak to read the delicate handwriting. From Asunción, back to Montevideo by train through the jungle, and then setting sail in the hold of a ship, where it will miraculously be saved from the jaws of a rat that has left many other letters utterly unreadable in the past.

Still Georgina has not yet begun to live; she is still nothing more than a sheet of stationery that, in the darkness of the mailbag, is already losing its last whiff of perfume. First will come three weeks of transatlantic travel in the company of two stowaways who occasionally whisper to each other in a coarse Portuguese, and then debarkation in La Coruña, train, post office, train again, a postal worker who doesn’t read poetry and to whom the name of the addressee means nothing, and then Madrid, Madrid at last. It’s at some point on the long journey that Georgina begins to breathe and to live — so when she finally arrives at the poet’s house, she has become a flesh-and-blood woman, a languid young lady who thrums through a stream of ink and is currently awaiting a response to her letter back in Lima, at her Miraflores estate. A creature as real as the scentless letter that Juan Ramón Jiménez will read that very morning, with hands that are steady at first, but that soon begin to tremble.

Excerpted from THE SKY OVER LIMA © 2014 by Juan Gómez Bárcena, © 2016 translated by Andrea Rosenberg. Reproduced by permission of Houghton Mifflin Harcourt. All rights reserved.

What Does It Mean When We Call Women Girls? 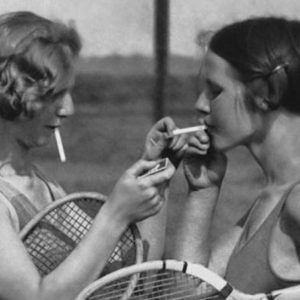 What Does It Mean When We Call Women Girls? As a dedicated contrarian—someone whose few attempts at trend-chasing have culminated in baroque, Wile E. Coyote-esque...
© LitHub
Back to top