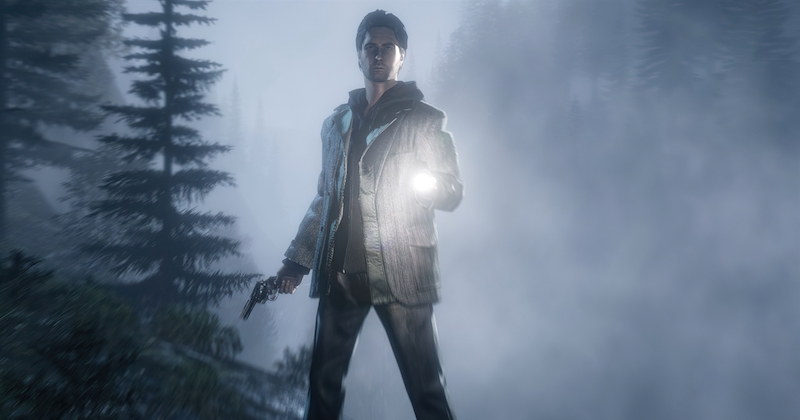 The single best video game about a novelist is getting a shiny new remaster this fall.

You didn’t think there were video games about novelists, did you? Well, there aren’t that many.* But there is Alan Wake.

For the uninitiated, Alan Wake was an Xbox 360 exclusive created by Sam Lake for Remedy Entertainment—and by most accounts, one of the best console games of 2010. Our titular hero is a bestselling crime novelist who has been paralyzed with writer’s block for a full two years, and is so stressed out about his failure that he’s been having a slew of weird nightmares. Finally, his agent, whose name is obviously Barry, suggests that he and his wife Alice take a nice, relaxing vacation to the idyllic town of Bright Falls, Washington.

When they get to their cabin, though, Alice reveals that the trip is really a ploy to trick Alan into seeing a psychologist, who specializes in writer’s block or something (call me, Dr. Emil Hartman), and shows him a typewriter in the other room, just waiting for Alan’s Next Great Novel. Alan gets pissed and storms out, and when he comes back, Alice is being dragged out into the lake. Supernatural forces are at play, you see. Alan blacks out and wakes up a week later to discover that their nice cabin was destroyed back in 1970. Uh oh. (Dr. Emil Hartman is pretty sure Alan is having a psychotic break, though. Novelists, amirite? And don’t even get him started on poets.)

I won’t give any more away, but the whole game is about the power of storytelling and the connection between fiction and reality, and heavily influenced by Twin Peaks and Stephen King, in the best way. (The game’s opening line is “Steven King once wrote that nightmares exist outside of logic and there’s little fun to be had in explanations. They’re antithetical to the poetry of fear. In a horror story the victim keeps asking why, but there can be no explanation and there shouldn’t be one.”) Sam Lake has also cited Bret Easton Ellis, Mark Z. Danielewski, and Neil Gaiman as influences. As you can imagine, it’s a lot of fun.

Despite its popularity, the game never got a sequel—but we have recently learned that Alan Wake will soon be re-released in a remastered version for PS4, PS5, and Xbox, and will be available to play in full 4k glory this fall.

*That I am aware of. And no, sorry, I don’t count Varric!