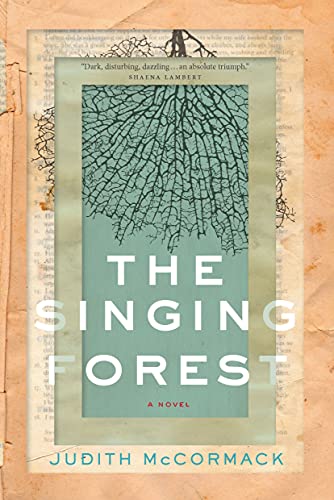 The following is excerpted from The Singing Forest, a new novel by Judith McCormack. McCormack writing has been shortlisted for the Writers’ Trust Fiction Prize, the Commonwealth Writers’ Fiction Prize, the Journey Prize and the Amazon First Novel Award, and her short stories have appeared in the Harvard Review, Descant, The Fiddlehead, Coming Attractions and Best Canadian Stories.

Children found the bones more than once. This was one of those times.

They should have known something, of course. They did know. They didn’t know. They had no idea it was as bad as that. It was a soft, deadly secret that had settled into the small forest, blanketing the ground, wrapping itself around the rough skin of the trees. The people nearby tended it silently, patting its edges, smoothing it, the metallic taste of it always in their mouths. As soon as they thought they knew it, though, as soon as they believed they could run their hands along its contours in their sleep, they would remember something else, hear about something else, something they had forgotten or perhaps never knew. Then the secret would assume a different shape, a new form, still soft and baleful.

The black vans. The barking dogs. The shooting in the night.

They closed their eyes, their ears, they stuffed their fists in their mouths, desperate to escape the clammy terror. They knew instinctively that secrecy was the only possibility for these things, that this was the only way to survive, even after so many years. They knew it without a word to each other, a mute understanding that bound them—reluctantly—together. But even after these things were gone—and who would know when they were gone forever?—the fear remained, settling in along their spines, so much a part of them that eventually they began using it to place themselves, to find their bearings.

This secrecy, this silence had an existence of its own, though, its own offshoots. Other things sprouted in it, unbidden, unexpected.

Two boys. Suddenly there, scuffing through the layers of dead leaves, needles, surrounded by the smell of sweet decay. Shapes of autumn sun glinted off their hair, their arms as they wandered through the copse, kicking at fallen branches. From a kalhas nearby, their family was part of the collective dairy farm—herds of coarse-haired cows, vats of buttermilk and soured cream. The older one, Efim: stubborn, wearing a faded red shirt, a mole on his hand. His brother, Makar: pudgier, round-faced.

The dog: a dirty white hound, pushing his nose into piles of leaves, digging with his front feet, and then loping on to the next pile, the next rotting branch.

They were curious, recklessly curious—the 11-year-old cocky with it, the 9-year-old his loyal follower. Something so hidden, so lied about must be worth knowing, and they wanted to know.

They had slipped off after the first milking, dodging around the cows in the sheds, slapping their flanks, the grassy breath of the animals rising in the cool air. Naturally, they had been warned over and over to stay away from the forest, to stay away from these very trees, the spiny larches, the spruces with their drooping boughs. But they had been warned so often that exploring the place was irresistible, and all the evasions had made the older one itchy.

The dog was digging into the sand, and poking out of it were odd-shaped branches, blunt ends, an old boot half-buried on one side.

They wandered through the trees now, kicking at clusters of red chokecherries in the undergrowth. The air was old, undisturbed, as if no one had been there for years, something that was almost true. A place of shadows, lost in an uneasy sleep.

The older one picked up a stick and swiped at a tree trunk, marked with the wormy tracks of bark beetles. The stick cracked in the silence and the dog bounded off, lost in a geography of smells. The younger boy stopped to kick at a log beside a buckthorn, the sides fallen in, the wood shredded with decay. A current of wind rustled through the branches of the trees, a hint of the cold weather to come.

Then, suddenly, the dog was back, leaping with young dog joy. He dropped a white knob in front of the older boy, and stood,  panting. The boy picked it up, rolled it around in his fingers.

What is it? said his brother.

They followed the dog, watching him pounce and whirl through the undergrowth, attacking bushes, a brown puffball.

Then a hollow, a broad depression in the ground, a stretch of sandy earth. The dog was digging into the sand, and poking out of it were odd-shaped branches, blunt ends, an old boot half-buried on one side. He picked up something large, globe- shaped and began shaking it, and they saw the sockets in the front, the gaping mouth, a broken tooth.

Recognition. A hair-trigger shock. The younger boy grabbed his brother in fear, and they began to run, tearing through the scrub, twigs scratching their bare legs. They ran panting, out of the forest, into the secret.

This is Belarus, a country of shifting boundaries, a map reshaped so many times that its edges are frayed. Home to godwit birds, red deer, and a collection of wary people, people given to fits of yearning, bouts of knifelike courage. No accident that their folk tales are filled with mischief, with sudden twists of fate.

A landlocked country, bounded on all sides, not an ocean to be found. Someone looking for salt water would have to travel south down the Dnepr River, through Ukraine, and all the way to the Black Sea. Or go west across the Dvina River, through Latvia, and into the Gulf of Riga to arrive at the algae blooms of the Baltic Sea. Or—less likely—travel west again along the looping Nyoman River, through Lithuania, to the Curonian Lagoon and into the Baltic by that route. Ukraine, Latvia, Lithuania—together with Russia and Poland, the five countries that surround Belarus, that fence it in.

A restless group of neighbors, something of a misfortune at least, if not an actual curse. Some of them are on the peevish side, quick to give offence, even quicker to take it. Or they attempt to lay claims to pieces of the country from time to time, to use it for their own ends. The result? A nation invaded, divided, annexed, given away, retaken. A place of turbulent beauty, forced into constant rebirth.

But it was in the late eighties, the tail end of the last century, when a hawk-eyed archaeologist began asking questions. He had heard whispers about the bones, and he had his suspicions. Tell me, he said to the people who lived around the forest, tell me what you know. And because he sounded as if he knew already, that it was only a matter of filling in a few facts, they did. They told him stories that had been building inside them for years, the details spilling out. It was my nephew, my cousin, the school-teacher. My son. It was the vans rumbling by in the dark, the crack of the guns, the dogs, always the dogs. It was the blood in the earth, the blood that made the garlic head mushrooms grow in pink. The archaeologist took it all down in notebooks and saved it, waiting until the time was right, waiting until he thought someone else might listen.

A flickering, a loosening of the climate, and he was ready. Finally, the Procurator’s Office was forced to do something. A flock of people—criminologists, doctors, more archaeologists—descended on the sunken earth in the forest. They measured and dug intersecting trenches, they drank hot tea, they made drawings and took photographs. When they had excavated down to the first layer, they drew maps, noted depths, the smoke from their pungent cigarettes curling around their heads. Then they began—methodically, gingerly—exhuming what they had found: bones, skulls, rotten clothing, combs, buttons.

Bullet holes, said the medical experts, turning over the skulls.

Russian guns, said the ballistic experts, holding cartridge cases up to the light.

A grim job, said a young criminologist later, studying his glass of vodka as if there might be some additional findings there, a finger bone or a vertebra.

Grim, but fascinating, he said reverently after two more glasses. In a terrible way, he added quickly.

A report was submitted to the Procurator’s Office, full of treacherous facts. Among them, though, this one stood out, this one was the starkest:

But it was too late. Around the forest, a long, quiet sound began to spread, something that was part sigh, part whisper.

The sound of relief that this place of hidden graves was no longer deniable. Relief that the exhaustion of keeping this secret was over. Relief that this distant piece of time, these bodies would in some prickly, solemn way be finally given their due.

They were wrong, of course. 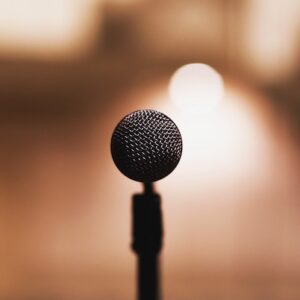 Three Poems From Malika’s Poetry Kitchen For the Young Men Popping Wheelies on Southwark Street in Late Afternoon Traffic Jacob Sam-La Rose One day, you will...
© LitHub
Back to top