Elizabeth Greenwood on the middle-aged fantasy of pseudocide

If you want to disappear completely and never be found, then you might turn to a book of the same title by Doug Richmond, published in 1986. When I began skulking around the idea six years ago, I ordered a copy of this classic in the small literature of disappearance. The cover is a stark white with a pair of Groucho Marx glasses: bottle frames, bulbous pink nose, mustache of text about leaving your current life for a superior new version. The book harkened to a simpler time. I felt a kinship with Richmond. He wanted answers from people who had gone off the grid, and their stories. I did too.

I’d recently taken out the first year of tuition in student loans to attend the MFA program of a school that I was shocked had accepted me. A degree from an Ivy League school appealed to the shameful streak of bourgeois striver in me where name-brand prestige mattered. This is the same striver streak that compelled me to go into about $60,000 of student loan debt at a west coast college landscaped like a resort, far from my parochial New England hometown.

I was having dinner with a friend when I realized how seriously I’d financially fucked myself and how I’d evade the consequences of my delusions of grandeur, the hubris to pursue the most indulgent degree that exists. He suggested I fake my own death. I loved the idea, though more as a daydream than a game plan. But what I stumbled upon was a world unto itself.

In his opening sentence, Richmond writes, “To a man of a certain age there’s a bit of magic in the very thought of cutting all ties, of getting away from it all, of changing names and jobs and women and living happily ever after in a more salubrious clime!” I pictured the paunchy, disenchanted readers of Richmond nodding along. I doubt Richmond ever envisioned me, a young-ish woman, sharing a fantasy with that man of a certain age. He relays a second-hand story of a browbeaten husband with a passion for model railroads. His shrewish wife followed him down to his basement control center. Richmond recounts: “She started bitchin’ and naggin’ and working herself up into a tirade. And do you know what she said to him? ‘You think more of that damned toy train set than you do of me.’” According to this stranger who allegedly relayed this story to Richmond in a bar, the model train conductor cleaned out his bank account the next day, and disappeared shortly thereafter.

The tips Richmond offers his readers are about as sophisticated as the Groucho Marx glasses on the cover. He encourages readers to take up with strangers they meet in bars the first weeks on the lam in their new identity: “They may provide you with food, shelter, and a mailing address while you’re getting your new identity established.” Scour the obituaries for identities to nab. Get a job working construction. Avoid becoming a TV personality.

I wanted to know if it was possible to fake one’s own death in the 21st century, three decades past Richmond’s writing. I attempting to lock down interviews with people who traffic in disappearance, like Frank Ahearn, the world-renowned privacy consultant. He cancelled appointments with me for a year until we finally met up. I was reaching out to people who had been caught faking their own deaths, and trying to sort fact from self-mythology, sifting how they really felt about getting busted from the bravado of relaying the yarn. I stood with John Darwin on the beach in northeast England where he kayaked out to sea in 2002, then escaped to the opposite side of the country and camped out, then returned to his hometown in disguise, and even walked past his father in the street one day. In moments like this, faking death was pure magic. But then I met family members who had been in some way caught up in a loved one’s ruse—like one woman who thought her dad had been dead since she was a toddler and then learned in her thirties he had been alive the entire time. Or a young man who colluded with his father to cash in on a life insurance policy and wound up serving time in jail. Hearing their stories and how their lives had been shattered threw the idea of faking death into new relief.

Richmond began to piss me off, and not just because of his central casting middle-aged dude chestnuts. In his telling, he’d just be minding his own business at a bar and a stranger would lambast him with the secrets of disappearing, all from an old buddy who managed to ditch the ball and chain and live in a camper, his days full of fly fishing and brewskis. He tells his readers in the introduction that though he has “talked with hundreds of people about the art of disappearing… the conversations recounted herein are essentially reconstructions from memory rather than verbatim quotes.” Richmond was unfettered by the rules of journalism and instead created a kind of oral history of disappearance.

The secrets of disappearing were chasing Richmond and he was just trying to keep up. And he only bothered with the fun parts, all the delicious planning and tawdry daydreaming, not the people who got left behind, not the plans that went awry. For Richmond, disappearance was all glory.

But it was that glory I needed to tap into. In the course of writing any book, and living with one topic for six years, one grows despondent. There were many occasions which I wondered why I continued to run this fool’s errand of writing about a paradox: disappearance, which means nothingness, which means writing, really, about a void. And writing about faked deaths in particular, where the success of a pseudocide is measured in its presumption of death, i.e. sources who aren’t known for their garrulousness.

And as with any topic, one becomes inured to even the most delightful charms. A friend once glimpsed a neon post-it reminder on my desk: “Verify cost of death kit.” She was floored. “What the eff is a death kit?!” A death kit can be bought in many a developing nation, containing all the documentation to present to your life insurance company to attempt to cash in on a policy. Depending on your budget, you can even stage a phony funeral with mourners weeping over your open casket (a cadaver from a black market morgue as your stand-in, of course) as further evidence of your untimely demise. This had all become normal, all in a day’s work.

Richmond’s book always held up that mirror that my friend did for me that day. He reminded me why disappearing was a daydream. He also reflected back to me the selfish part that thought I could explore death faking surgically, just to remove the tumor of my student loan debt. I learned that this would be impossible. There is always collateral damage. But reading Richmond always brought me back to the source, the thought that you could get away with it, the sweet escape.

I’d bring the Richmond book with me when I was writing, and on reporting trips, not so much for reference but more like a lucky talisman. In my frustration in trying to track down the slippery characters I came to know and write about, in my loneliness at my laptop, the book never let me forget the joy of pure potential, of reinvention and reimagining. And in a lucky stroke of design, the cover of my book ended up the inverse of Richmond. For his Groucho Marx glasses, nose, and mustache, I have a man without a face.

Elizabeth Greenwood is the author of Playing Dead: A Journey Through the World of Death Fraud. Her work has appeared in The New York Times, VICE, O, the Oprah Magazine, Longreads, GQ, and others. 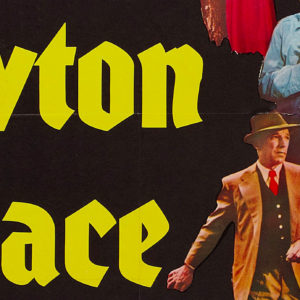 In my early teen years, one of the great treats of summer vacation was visiting my local library unaccompanied. There,...
© LitHub
Back to top