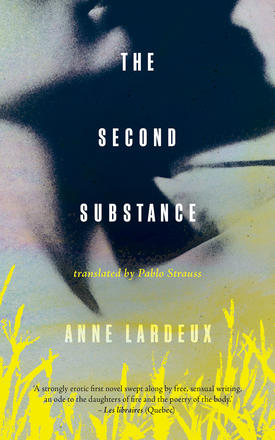 The following is a story from Anne Lardeux's debut The Second Substance (Les mauvais plis). Lardeux was raised in France and lives and works in Montreal, where she painstakingly follows her ideas and convictions where they lead. Her multidisciplinary practice spans music, film, and writing, and is not easily separable from her social activism and caring work. Together they constitute an unsparingly honest but playful interrogation of how we live that turns up glimmers of hope in unlikely places.

WOMEN STANDING IN THE EVENING LIGHT

The asphalt no longer softens in the heat. Like the ageing skin on the back of a hand, it ﬁssures into a diamond pattern broken only by inoffensive, stubborn bumps.

The ground is rising up, disarming the road. The parched earth itself wants to take ﬂight. The withered trees on either side have not caught ﬁre, not tonight, though the bone-dry air is abuzz, primed for a great blaze. Throughout this world, revolt is welling up and creeping in on false respite.

Two women, one still a girl, the other, well, it’s hard to say, sweep a deserted stretch of road. Intently they gather up and ﬂick away the debris that has chipped off the blacktop. The shorter one kneels, palming the surface. The taller one stretches out on her stomach with an ear to the hot asphalt. The ground takes her weight; she abandons herself to it.

Later, when both have gotten to their feet, they stand with hands on hips in an evening light that traces the contours of a hope they measure out by eye. This evening is like every other, no spark to ignite the Revolution, just another evening leading tediously to another day.

The girl doesn’t respond. She answers to the name Antonia. The woman? It’s complicated, maybe political, but there’s no name we can give her that she would accept.

I ran away because I couldn’t ﬁgure out what else to do.

I wasn’t after anything in particular. But I wanted to experience something.

I ended up on the road. There isn’t really more to it. It’s not like I’ve run away from everyone.

THE GIRL WITH NO NAME

I was searching for moments of radical autonomy and that made me attach myself to others. Nameless relationships became my direct action. I make my way hither and yon and touch them one and all. There is skin, coarse or smooth, and breathing. Hair and calloused feet, necks and asses, outstretched cocks, wet pussies, young and old and neither quite. I am errant and unproductive and my freedom is my burden to bear.

In her parents’ living room, The Girl With No Name sits on the edge of a chair near the door, toying with the idea of running away. She who is usually so carefully made up has grown greasy-haired and bloated on this family visit. She knits. At her feet, a small girl plays with action ﬁgures, conjuring up their tragic human fates in a terrible whisper.

‘Get your carts! Saddle your horses. I’m gonna kill you! Oh? No, no! Take pity… Take shelter, my love. Quick! Oh, my king. Aaarrrrgh. Take your sash, to heal my wound. It’s too late. He’s dying. Bring a glass of water and a knife. I’ll raise an army of urchins, save my dying people!’’

The young woman knitting gets drawn into the story of the campaign being waged on the carpet. With her knitting on her knee, she drifts into a reverie. There is water. She is at ﬁrst on the shore, then in a grassy valley. The wind’s strange rustling grows louder. A riotous horde tramples by. Many are the wounded. The oozing bandages wrapped around their heads give no sense whether they’ve been wounded in their ears or their teeth. Some hold up crutchless comrades. The women carry children and dirty bundles. An old woman offers her a hunk of bread. It’s hard as rock. The crowd is driven forward by a yellow horse that towers over them like a monument, pulling a sleigh piled high with bundles and housewares.

The Girl With No Name watches this precarious load pass her by without moving, and amid the great clanging of iron, untempered by the slightest mumble or laugh, she meets the gaze of a minuscule, hollow-eyed girl. The child’s head has slipped between two chair legs, which she clasps in her tiny hands. As soon as she appears she is gone, pushed along by the crowd.

Bringing up the rear of this long march are animals that have long ceased to dream of freedom or conceive a life independent of humans. Three pigs, one goat, two cows, one limping turkey. She watches the starveling horde until it disappears.

When silence settles and even the echoes of their advance have faded to nothing, she kneels like a huntress to read the tracks this motley troupe left behind. No prints in this soft clay, just a formless mess that offers no clue about this migration or its urgency.

Left alone in the strong winter wind, she wonders what to make of it all.

Her newfound concentration is sharp as a blade, but tender.

The Girl With No Name sets out down the road, walking through ﬁelds, ignoring the long grass that scrapes her legs. She steps over pipelines and train tracks, searching for the suburban patchwork and the chipped concrete of deserted tunnels. Leaving fear behind, she sets forth to receive the waves of the world.

THE CRACKLE OF DOUBT

I place the tape recorder on the desk in front of me and press STOP/EJECT. The door opens, with the muffled thwock of plastic and metal springs. I put in a blank tape, shut the cassette door and, with my two index ﬁngers, press the red REC and black PLAY buttons down together. Tape rolls.

I have moments of horrible anguish, when I tell myself I’ll never make it.

And it’s true … I might not make it, but I’m going to keep trying anyway.

I press STOP. Consider REWIND, to take another listen. I’m reading the message Delphine Seyrig recorded and sent to her son when she was called to New York for a role.

I collect missives of doubt and discouragement, feelings of failure. I don’t really know why – to ward off my fears, perhaps? Or embrace my impending failures?

I stand to look at myself in the mirror. Turn my head to glimpse my proﬁle, and that’s when I see him through the window. No longer in a private space, I curl up into a fetal position on the ﬂoor. Shit! What’s he doing here? He ﬁnishes locking his bike to the metal grille and pushes on the main door. What? No! He rings the bell. But why? He’s persistent. Maybe he didn’t see me? It seems hard to believe.

I crawl over to the hallway to step away from the window, but when he rings a third time, longer now, I do as I’ve been taught. Okay, open the door, like a grownup.

We chat. The man was just passing by. I offer him a glass of water. He leaves. I close the door, whisper an annoyed Goodbye. Feeling crushed, I turn off my computer without saving and sit down on the bed. I have no idea what structure even looks like, can’t say for sure I’d recognize one if it slapped me in the face. I have no clear sense of where I’m going or where I might feel better. 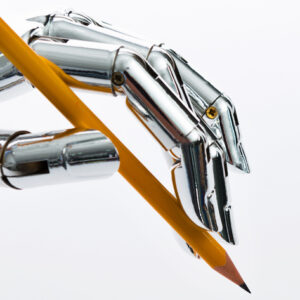 Does Artificial Intelligence Really Have the Potential to Create Transformative Art? I. The Situation In 1896, the Lumiere brothers released a 50-second-long film, The Arrival of a Train at La Ciotat, and a myth...
© LitHub
Back to top