American Brown Shirts in the Streets of the Capital

Is This the Last Flail of the Proud Boys, or the Beginning
of Something Worse?

It was just past 1 pm and once again the weather was perfect, another blue Saturday afternoon in DC, a week after Joe Biden had been declared President-elect. Pressed around me were the outgoing President’s most ardent supporters. They’d traveled here from across the country to contest the outcome of the election; for hours they’d been walking a two-mile route from the White House to the Supreme Court. Their numbers were in the thousands. They wore red and blue outfits and hats with the variations of the MAGA slogan across the front. They spanned all ages, though many of them seemed to be in their fifties and sixties. But few if any were wearing masks, which made my own—a washed-out medical type I’d pulled from my glovebox—feel all the more glaring.

Already there’d been chants of “USA!” and “Stop the Steal!” Now another seemed to be starting up. I noticed then that the Proud Boys were approaching along the parade route. They arrived in a column, phalanx-like, and as they marched toward the steps of the Supreme Court this new chant took shape: “FUCK ANTIFA!” This adversary, they’d been told, was out there waiting for them just on the other side of the police barricade.

There were nearly 50 Proud Boys in all: mostly white men who appeared to be in their twenties and thirties, though a few were noticeably older. Each one was gripping the shoulder of the person directly ahead, a gesture that felt tentative yet determined. Above them they were waving flags and a handwritten sign that proclaimed: KYLE RITTENHOUSE DID NOTHING WRONG. A few were reaching overhead, their fingers fanning out to form a W, with the thumb and pointer locked together in a circular P: a symbol for white power.

From a few feet away I watched them pass. They were wearing black Fred Perry polos, the collars trimmed with gold stripes, a style co-opted from British skinheads that might be best described, today, as country-club punk: with their beards and beanies and backwards hats they were moving through the audience of Trump’s golf-shirted supporters. Some wore plastic sunglasses and yellow bandanas. Others had donned flak jackets—though, thanks to DC’s open-carry restrictions, there was no trace of the assault rifles and holstered sidearms from previous rallies. Cheers rose up in waves. At last, they’d achieved the status they’d been seeking: that of the MAGA universe’s one true paramilitary wing.

Together they’d taken up the chant of the wider crowd, a sort of call-and-response to mark their passage forward. I had my phone out to record them, and for the most part they’d ignored me, surrounded as we were by so many favorable onlookers. But toward the end of the parade I recognized a familiar face. I’d crossed paths with him on election night while conducting an interview with Proud Boys chairman Enrique Tarrio, and in the days that followed had been shocked to see his picture alongside articles in the Daily Mail, the New York Post, and the Sun that described an altercation that occurred in the early hours of that morning, near the White House. There is a video of this altercation, and in it the man I was looking at now had been stabbed. He had stumbled toward the camera, then away, bleeding profusely. I had seen the look in his eyes when he realized that the blood on his hands was his own.

But here he was, back in the city with a scarf to cover the wound at his neck, his own shouts adding to the clamor. And while he continued past without glancing in my direction, I continued to stare. Just then I found myself making eye-contact with the person who was walking at his side. He emerged out of the fog of my peripheral vision, caught my gaze, and was now staring back.

The thousands of Trump supporters, I suddenly realized, were coming together in song. Softly at first, then louder, until I recognized the National Anthem.

He had a ratty beard, this new Proud Boy, who was now watching me. It was pulled into a braid at his chin. He was chanting too—“Fuck Antifa!”—but at a slower cadence than the rest, his lips curling into his teeth. I’d never seen this man before in my life, but already he’d taken me in for the sum of my parts and recognized me as a threat—my mask, my plaid shirt, and my phone, outstretched and recording. He glared in my direction, and even as he moved away, kept me in his sights. I felt his eyes like matches waiting to strike; it was only a matter of time.

I looked away first. With the rest of his group he continued through the crowd. “Fuck Antifa!” he shouted again. All in all we’d crossed paths for a few seconds at the most. Still, the message was clear.

It was nearly 3 pm when I found my way to the other side of the barricade that had been assembled between the onslaught of MAGA marchers and another group—counter-protestors, activists and DC locals who’d also been gathering since the morning.

Once it became clear that thousands of Donald Trump’s supporters would be heading to the capital, the group @DC_Protests_ sent out a call across local channels to organize a response:

We are coming together in resistance to a last stand attempt by the MAGA crowd to hold onto power. We do not welcome the far-right in our communities, neighborhoods, and our city, Chocolate City, which already stands on colonized Piscataway land. The presence of MAGA, Oathkeepers, Proud Boys, and other affiliated far-right groups in our city needs to be taken seriously.

But approaching now it was clear: not many had answered the call. While the number of Trump supporters that day would later be estimated at somewhere around ten thousand, only a hundred or so counter-protestors were present. The contrast was shocking when I reflected on the enormous crowd that a week earlier had gathered to celebrate Biden’s victory.

I was met at their rear flank by a friend, Emily (I’ve omitted her last name out of concerns for her safety), a veteran of the DC protest scene who, during the 2018 Kavanaugh hearings, was arrested three times. “I really can’t get arrested again today,” she told me now.

Together we walked past a dozen or so young men and women in black jeans and helmets, their road bikes positioned before them in a makeshift barrier. Ahead, the vast majority of counter-protestors were facing the Capitol. They were holding signs that read: WHO PROTECTS US. PAGANS AGAINST FASCISM. YOU ARE COMPLICIT. SOLIDARITY AGAINST BRUTALITY. And: FASCISM: SMALL DICK ENERGY. A row of police officers, decked out in riot gear, stood in front of a low chain-link barricade, separating them from the sea of Trump supporters beyond.

“I know people who were telling me not to be out here, but I feel like it’s my responsibility as a human being to stand up to these people.”

Who were these counter-protestors? Like the Proud Boys their ages ranged, and many of them were white. Most of them seemed young, all of them worse masks.

“We confront injustice that disproportionately affects Black and Brown communities,” the organizer’s website states. “We provide education on anti-Blackness and systemic racism within our governmental institutions. We keep us safe.”

I spoke with a 32-year-old political scientist—he requested I refer to him only by his first name, “And”—who explained that he’d come here as a matter of moral obligation. “Forty to fifty percent of the country is prepared to abandon democratic norms and processes,” he said. “I know people who were telling me not to be out here, that it’s dangerous for me to be out here, but I feel like it’s my responsibility as a human being to stand up to these people.” He’d grown up in the Midwest and later studied in Europe. With the grimness of an academic he described how he’d taken a stand while he’d been in Austria, where he’d studied the far right. He’d be damned if he didn’t do what he could here, too.

Jack Murphy, a 29-year-old DC resident who grew up in Northern Virginia, explained that he was here to stand up to Trump’s abuses. “He’s a danger to our country and we’ve got to make sure we protect the integrity of our election,” he said. Everyone had let their guard down after the election, he told me: “With Trump switching things up at the Pentagon it seems like he’s trying to reel in the military to maintain his administration.”

For Emily it was a matter of  protecting one another. “The cops are always turned toward us and not them,” she gestured to the officers in riot gear only a few feet away with a sweep of her arm. “Look—their backs are to the people who openly shout about wanting to do us harm!” They added quietly, “They’ll let them get away with it too, that’s one-hundred percent the reality of what we’re facing.”

As we were talking, a commotion broke out at the rear; a bearded man in combat fatigues and a camouflage cowboy hat had rushed past the bikes into the front lines. A few counter-protestors took out long black umbrellas and unfurled them in his face, which he batted with a sudden air of confusion—like an enormous, half-hearted housecat—until the police arrived and escorted him away.

This happened on multiple occasions over the next hour. Trump’s supporters would break through the barricade, one at a time, as if from all directions. At each new breach, their cheers grew louder—“Four More Years!” they chanted.

I didn’t see much of the Proud Boys, not that they were done for the day. Later that night, under the cover of darkness, they continued their march, this time through the city blocks near the White House. A fit of violent attacks ensued that would culminate in multiple life-threatening injuries. All of which our current President has condoned on Twitter.

That afternoon, just before I headed home for the day, a new movement had begun to materialize across the barricade. The thousands of Trump supporters, I suddenly realized, were coming together in song. Softly at first, then louder, until I recognized the National Anthem.

Alongside me, my friend Emily said, “Look at that.” She was pointing to the police line. It didn’t take long to see what she meant: about fifty feet in front of us, an officer in full riot gear had joined his voice to those of the Trump supporters. From behind the plexiglass shield of his helmet you could see his lips moving to the lyrics, holding the final verse with an intensity so feverish, his colleagues flinched.

Long after the song had ended Emily was still shaking her head. “This is what I’m talking about,” she said. “They’re talking about usurping power. Through violence. They are violent. The cops just stand by. They’ll let it happen. Not enough of us are taking it seriously. We’re underestimating these people. What happens when it’s too late?” 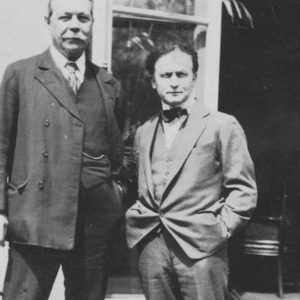 Arthur Conan Doyle and Harry Houdini first met in 1920, brought together by a mutual interest: spiritualism. Their friendship...
© LitHub
Back to top