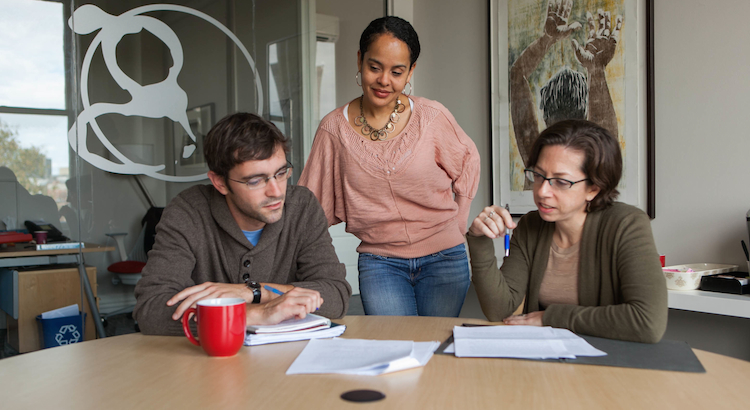 The Rise of the Writing Center: GrubStreet

On Building a Literary Community

If you read the author bio on any dust jacket, it’s not uncommon to see that the writer went to graduate school for an MFA in writing. But it’s no secret that there’s another path to getting published, and it doesn’t involve a formal education. Perhaps this is why writing centers across the country are so successful. In some cases, those who graduated with advanced degrees want to keep going and maintain a workshop atmosphere in which they can thrive. But increasingly, people with day jobs who never even took a creative writing class as an undergrad are giving it their all in workshops sponsored by writing centers where they live.

I don’t have an MFA, but I’ve never let that hold me back from pitching the publications I want to write for. I’m an instructor for Sackett Street in Brooklyn, and there’s no greater pleasure than helping other people work towards their own writing goals. With that in mind, I decided to interview some of the people behind six of the best known writing centers in the country: the University of Arizona Poetry Center in Tuscon, Arizona, GrubStreet in Boston, MA, the Attic Institute of Arts and Letters in Portland, Oregon, The Center for Fiction in NYC, Sackett Street in NYC, and Writing Workshops Los Angeles.

For the first part of this series, I interviewed the woman responsible for starting GrubStreet, a dynamic organization that has changed the literary landscape in Boston. In addition to the impressive number of workshops and classes they host, they also sponsor a major literary conference, The Muse and the Marketplace.

I started GrubStreet in the spring of 1997 by hanging a flyer on a tree in Brookline, MA.  I managed to attract eight students, one of whom was a friend doing me a favor. The main reason I started GrubStreet, to be honest, was that I hated my day job at the time.  I was teaching composition at a Boston-area college, and I was quite unhappy. I had gone to BU’s graduate creative writing program on a teaching fellowship and had fallen in love with teaching creative writing in the process. I had also met a score of incredibly talented young writers. I wondered what would happen if we brought the rigor of the university into the community. I was blown away by how incredibly talented so many of our students were right from the start. They were also incredibly generous with each other. To my mind, 18 years later, talent and generosity are still the two traits which best characterize the GrubStreet community.

Many, many writers have taught with us over the years. We currently work with roughly 100 local writers who teach everything from evening seminars to multi-week workshops to yearlong intensive programs.

This fall, we’re offering about 110 seminars and workshops.

I wish I had a complete answer for this but we don’t have complete records. The short answer is many! GrubStreet is unique in that in addition to our classes, we run a major publishing conference every year, The Muse and the Marketplace. Book deals come out of that conference every year. In fact, agents are so sure that they’ll discover new voices coming out of GrubStreet that they are now asking for meet-and-greets with our advanced students. In the last few years alone, we’ve seen 20 percent of our novel incubator students get book deals. I’ll name just two recent, noteworthy publications. First, Patty Park’s Re Jane which debuted this spring and is garnering rave reviews. It’s a fresh re-telling of Jane Eyre from the point of view of a half-Korean, half-American orphan. Another important book attracting attention and readers is Wise Latinas: Writers on Higher Education, by Jennifer De Leon. Jennifer is a former student turned instructor who began constructing this anthology in a GrubStreet workshop. Featuring writers such as Sandra Cisneros and Julia Alvarez, the book is meant to provide young Latina women with much-needed guidance and inspiration in tackling higher education, sometimes as the first in their families.

It’s hurt my writing career but that’s by design. I learned early on that I was more energized by building this community and learning the publishing trade than I was by working on my own fiction writing. I’ve also spent the last decade as a working mother, which has left me little extra time. As my kids get older, I am beginning to see that I’ll be able to dedicate some time to writing again. One thing I’ve grown to understand is that while I studied fiction in graduate school, I am actually much more drawn to memoir and creative nonfiction. It’s exciting to think about exploring these genres in the coming years. I plan on taking a few GrubStreet classes in essay writing and memoir to get me started again.

I don’t see opposition. I see a healthier, bigger ecosystem with more opportunity for more writers. Places like GrubStreet provide affordable and accessible educational opportunities for many students unable to commit the money or the time toward an MFA. We have many students who come to us before pursuing an MFA and other who join post-MFA to find fellow writers. Patty Park, mentioned above, joined our Novel Incubator program after receiving an MFA from BU. Moreover, we employ MFA graduates to teach our workshops.

Funding. Finding the right balance between affordability and sustainability. How do we remain as accessible as possible while accommodating the rising costs of providing excellent programs. We’re a 501(c)3 so we also raise money to support scholarships, fellowships, and free teen programs. Raising money for literary causes is challenging. We’re the poor step-child of arts funding. We’re working to change that, but it’s not easy.

Well, we weren’t great record-keepers in the early days, so it’s impossible to know for sure, but we estimate that we’ve had roughly 20,000 students through our doors. These days, we work with about 3,000 students a year in our adults and teen programs.

We modeled our workshops after the traditional workshops you find in most MFA programs, but over time, we’ve become experts at listening to our students and innovating to meet their needs. We now have a host of programs like our Novel Incubators and Generators which have a structure you won’t find anywhere else.

From the very beginning, GrubStreet has been a community. I saw the signs of it in our very first classes as the students became friendly, kept in touch, cheered each other on, etc. Their generosity floored me. Our Novel Incubator program is a great microcosm of what I’ve seen happen repeatedly over the years. We started the program for ten advanced novelists in 2011. When the first class graduated that first year, they began an alumni network which welcomes the new incubator graduates every year, arranges an annual retreat, raises money for scholarships to the program, turns out in force when their fellow alum have readings or book launches, and collectively curates and produces a wonderful website, Dead Darlings, dedicated to “everything novel.” Now, when a student enters our novel incubator program, they are not only getting an incredible educational experience with us, but they are also getting a peer group for life.

GrubStreet has always tried to be welcoming, loving and rigorous. We don’t have much patience for divas and we don’t think the world already has enough authors and books. Students are considered writers as soon as they walk in. They don’t have to prove anything to call themselves “writers,” they just have to be willing to work really hard and to engage in the critical feedback provided.

Monsters: The Hindenburg Disaster and the Birth of Pathological Technology