Monsters: The Hindenburg Disaster and the Birth of Pathological Technology 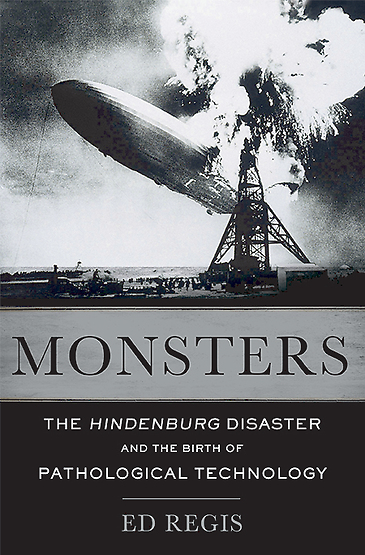 The following is from Ed Regis’s Monsters: The Hindenburg Disaster and the Birth of Pathological Technology. Regis is a longtime science writer and the author of seven books, including What is Life?, The Info Mesa, and Who's Got Einstein's Office? Most recently he was co-author, with George Church, of Regenesis: How Synthetic Biology Will Reinvent Nature and Ourselves.

The destruction of the airship Hindenburg on May 6, 1937, at Lakehurst, New Jersey, was one of the most visually shocking events of the midtwentieth century: it was the first time that a large-scale disaster was recorded on film, then coupled to a live, first-person account of the unfolding drama, and the result presented to the masses on larger-than-life motion picture screens. The combined image and soundtrack describing a scene of wild fury—untamed, uncontrolled, and unstoppable—instantly became an iconic, defining symbol of the era.

But that cataclysm, overlaid with portents of doom, also represented something else that has hitherto been little noticed, although it was almost as obvious, and just as striking, in its own way. The Hindenburg was an example of superior engineering, an object of advanced technology. Despite those attributes, it became a smoldering wreck in a bit more than thirty seconds. That should not have come as a surprise to its builders or operators, or for that matter even to its passengers. For one thing, the physical makeup of the craft virtually foretold and predetermined its fate: the Hindenburg was an immense vessel filled with more than seven million cubic feet of hydrogen gas, a highly flammable, indeed explosive, substance. For another, the craft’s fiery ending had been preceded by a number of prequels, many of them equally if not more spectacular, and some of them even more deadly, although none of them had been captured on film. In fact, prior to the Hindenburg disaster, a total of twenty-one hydrogen airships had been destroyed by fire due to accidental causes, sometimes killing every last person aboard. Yet hydrogen-inflated zeppelins continued to be built and routinely flown in commercial passenger service. How did it come about that so much time, money, and labor were spent designing, building, maintaining, and operating a craft that was continuously risking the lives of its passengers and constantly flirting with death?

And it was not only German zeppelins that ended their lives as blackened and charred metal husks. The British built and operated their own hydrogen-filled airships, some of which broke up in midair; one of them killed forty-four of its passengers, even more than were lost in the Hindenburg. In 1930 the immense R 101 set off from the Royal Airship Works at Cardington on its maiden long-distance flight, which was to India. Aboard was the British air minister, Lord Thomson, who had said of the craft: “She is safe as a house—except for the millionth chance.” Eight hours after takeoff the R 101 crashed into a hillside in France, where it exploded and burned, killing forty-eight of those aboard, including Lord Thomson.

Plainly, there was something deeply wrong with an oversize technological artifact that regularly put millions of cubic feet of explosive gas into close proximity with live and innocent human beings. The Hindenburg was a prototypical example of a pathological technology, one whose obvious and sizable risks were ignored, discounted, minimized, and swept under the rug by the influence of what amounted to an overriding, all-consuming, and almost irresistible emotional infatuation. That mental aberration produced a cognitive blindness to the craft’s systemic defects. The Hindenburg and other zeppelins were built and flown because the bigger these leviathans got the more they acquired a spellbinding, mesmerizing, hypnotizing, practically immobilizing sway over human minds and emotions—not only those of the public and paying passengers, but also of their designers, builders, and crew members.

Indeed, even after the Hindenburg disaster, which was the most hair-raising public calamity up to that point, the Germans did not abandon their cherished invention. Instead, the Zeppelin Transport Company (builders of the Hindenburg) inflated with explosive hydrogen a second airship of equal size, the Graf Zeppelin II, and sent it aloft on thirty flights, many of them under the command of Captain Albert Sammt, who himself had been burned and scarred for life in the Hindenburg inferno. This, too, was pathological. In fact, the Graf Zeppelin II was never freely and voluntarily abandoned by its operators; instead, it was scrapped in 1940 only because Reich air minister Hermann Goering had decided that the ship’s metal framework and components could be more fittingly used in bombers.

Never has a technology been so soundly, thoroughly, and utterly discredited as the hydrogen airship. Nothing whatsoever arose from its ashes. The craft was a complete and final dead end. But any technology that is so totally invalidated by a forty-year-long course of adverse events gives rise to a number of questions: How did it ever get started in the first place? How did it reach the ultra-high-risk degree of development that it did? And why did the technology persist for so long even in the face of its obvious and considerable flaws? The hydrogen airship also raises the question of what other such technologies might be lurking in our past, in our present, or, more important, in our future.

For the Hindenburg was by no means an isolated case of a mania-driven pathological technology. Certain similarly outsized projects—some of more recent vintage, others still being pursued today, and still others planned for the indefinite time to come—were and are motivated by the same sorts of mystic spells, emotive forces, and mind-numbing infatuations as was the zeppelin. For example, between 1957 and 1974, which is to say, for a period of seventeen years, the US government undertook, advocated, and financed an enterprise known as Project Plowshare. Plowshare’s purpose, under its primary cheerleader and intellectual champion, Edward Teller, was to perform a series of planetary engineering feats on a grand scale, excavating canals, harbors, rivers, and road cuts, among other things, by detonating a succession of nuclear bombs.

In 1957 Teller and his crew, based at the University of California’s Livermore Laboratory, started laying plans for the first of these exploits: a nuclear earthmoving demonstration to take place at Cape Thompson, Alaska. There a series of six atom bombs would give birth to a new harbor practically instantaneously—“in a matter of milliseconds,” Teller said.

In theory, those half-dozen nuclear explosions would transform a small stream (Ogotoruk Creek) into a major international shipping destination and lead to fabulous economic development in the area. As for the radiation and fallout created by the blasts, Teller minimized their possible dangers. “We expect that all except 10 or 20 percent of the radioactive by-product will be trapped at the deep zero points,” he said, “and we hope that it will remain practically immobilized in the fused rock.”

But that initial proof-of-concept event would be merely the opening salvo in a series of several much more ambitious nuclear geoengineering projects to be carried out elsewhere. Plowshare scientists devised plans for H-bombing a new and improved sea-level canal across the Panama isthmus, the “Pan-Atomic Canal”; a new highway route through the Mojave Desert between Needles, Arizona, and Barstow, California; a new harbor in northwest Australia; and other instantaneous creations. Some of these ventures would require an enormous number of bombs: the Pan-Atomic Canal was estimated to require anywhere from 260 to more than 700 nuclear devices, producing a total energy release in the range of 20,000 times as much as the bomb that destroyed Hiroshima.

At its peak, Project Plowshare employed hundreds of scientists and was frittering away hundreds of millions of dollars on plans for nuclear geoengineering operations at various points around the globe. But eventually the American government came to understand that because of the massive amounts of radiation that its planned bomb blasts would release into the atmosphere, the entire program was mildly insane. It was therefore canceled, but not before several trial blasts were set off at sites in New Mexico near Carlsbad and in the Carson National Forest; others in Colorado near Rulison and in Rio Blanco County; and still another at the Department of Energy’s Nevada Test Site.

Like heart attacks, pathological technologies are real and genuine phenomena—they are not imaginary. And the subject is an important one, for human lives, states of health, environmental effects, valuable resources, and large sums of money are at stake. At least one grand-scale enterprise even now being proposed for the future betrays all the hallmarks of a pathological technology: an interstellar spaceflight to be made by a Space Ark, a vehicle containing thousands of people that would travel at near-relativistic velocities, propelled by an exotic, fantasy-level propulsion system across light-years of space to an essentially unknown destination. Such a craft is disproportionately gigantic, its mission bathed in the halo glow and all the emotional allure of “going to the stars,” with any and all costs and risks dismissed under the all-purpose rationalization that the call to explore is an ancient and inescapable part of our DNA as a species and must be heeded no matter what. This would be a voyage, furthermore, that provided scant benefits to anyone except those aboard—in the unlikely event that they, or their descendants, survived the trip. Indeed, because of the extreme nature, variety, and abundance of the hazards it faces, the Space Ark (or any other starship) could well be the Hindenburg of the future.

From MONSTERS. Used with permission of Basic Books. Copyright © 2015 by Ed Regis.

The Rise of the Writing Center: GrubStreet


Ed RegisExcerptMonsters: The Hindenburg Disaster and the Birth of Pathological Technology
Share: 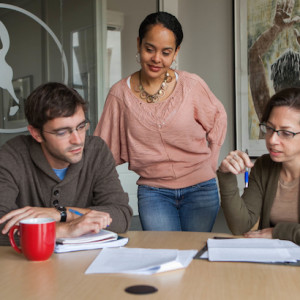 The Rise of the Writing Center: GrubStreet If you read the author bio on any dust jacket, it’s not uncommon to see that the writer went to graduate school for an MFA in writing....
© LitHub
Back to top