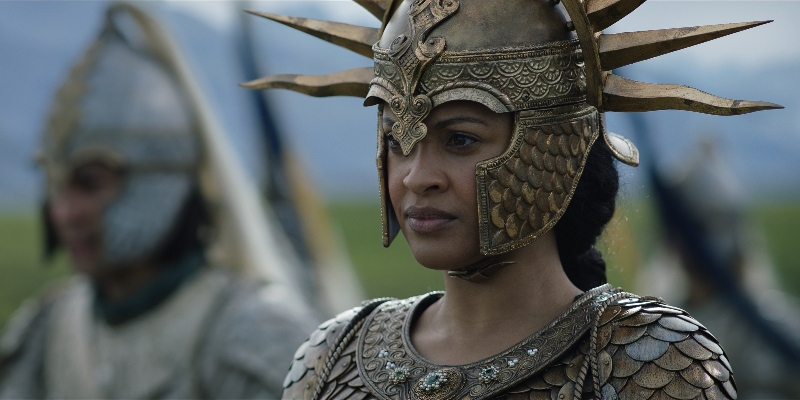 With Episode 6, Our Intrepid Guides—a Tolkien Devotee and a Fantasy Philistine—Find Themselves Divided

DYLAN: This week’s Rings of Power is nearly all action, as two of the season’s ongoing plots collide in a gruesome battle between Adar’s (Joseph Marlowe) orc forces and the humans who refused to join them, led by Bronwyn (Nazanin Bonaidi) and Arondir (Ismael Cruz Cordova).

Director Charlotte Brändström sustains the horror and excitement of the show’s first big War Episode for a solid hour, with multiple twists and turns of the tide. The good guys seem to finally win the day when the cavalry of Númenor, led by Commander Galadriel (Morfydd Clark), Captain Elendil (Lloyd Owen), and Lord Halbrand (Charlie Vickers) arrive to drive out or capture most of Adar’s forces.

However, their victory is short-lived, as the episode closes with the wicked barkeep Waldreg (Geoff Morrell) plunging a spooky blood-guzzling sword into an ancient lock, triggering the eruption of Mount Doom and the transformation of the Southlands into the ashen land of Mordor.

JENNA: I want to say, before we get into details this week, that I’m here because of my love of and interest in the lore of Tolkien’s world. I joke about reading The Silmarillion et al. on purpose, but it genuinely brings me pleasure to immerse myself in the backmatter and see how it all comes together. I didn’t expect the creators to be terribly orthodox with their details, but I was interested to see what they’d take liberties with and what would remain.

Tolkien has been the blueprint for a century of western fantasy, and while this isn’t an awful entry into the canon, it’s certainly not distinguishing itself.

It’s been clear for a while now that there’s “taking liberties with” a text, and then there’s using a number of recognizable proper nouns and a few plot elements as jumping off points for a completely different story. Rather than an attempt at constructing a streamlined narrative out of the disparate and often contradictory worldbuilding Tolkien left behind, The Rings of Power is, at its heart, a new story—which is not in and of itself a sin, but which means it is a fundamentally different show than I was expecting.

DYLAN: This makes me really curious as to what the Rings of Power of your imagination looks like. From what you’ve told me of The Silmarillion, it sounds like it would have been difficult to capture its scale, style, and tone in anything other than an anthology series with years or centuries between episodes, or maybe as a sort of mock documentary. I don’t even mean to dismiss these ideas—the former of which could have been really interesting—but from the outset, it’s been clear that this Rings of Power series would have a far more conventional structure.

JENNA: I don’t want to go into it too much, because that’s an entire essay and we still have the episode itself to talk about, but essentially: there are only about 100 years between Sauron first instructing the Elves in the making of the Rings of Power and the One Ring being forged. The big, big span of time actually has to do with Númenor: Elendil is actually born about 1700 years after the forging of the One Ring. All of the above is compressible—without the extreme flattening effect of the show’s “everything important is happening in the span of a few months” approach.

And beyond the conversation about millennia-spanning narratives, there’s the question of invention. The Silmarillion (and the appendices that Amazon actually got the rights to) are viewed as pretty dry, but the actual stories told therein are incredibly rich. Let’s take the example of the return of Sauron.

He travels to Eregion in a fair guise with gifts of knowledge and skill, and is welcomed with open arms by many, including Celebrimbor—but of those who mistrust him, there are some familiar names: Gil-galad, Elrond, and Galadriel. During this time, there was fast friendship between Eregion and Khazad-dûm. Remember “Speak ‘friend’ and enter” from the West Gate of Moria? Those doors were built at this time and inscribed with the moon-lettering by Celebrimbor himself. When Sauron is revealed in his forging of the One Ring and Eregion is destroyed in the subsequent war, it’s King Durin III who emerges from Khazad-dûm with an army, enabling the escape of Elrond and his group of survivors.

It’s funny to me that the episode that seems to have solidified your disappointment in the show is also the one that has me feeling the most on board.

There’s at least a season of prestige TV in there, with a lot more where that came from. And it’s really stark that in comparison, the things that Rings of Power are choosing to invent keep feeling sweaty to me. The light of the Eldar is fading for some reason and we need mithril to stop it! Galadriel didn’t experience any of the extremely intense stuff she lived through in the text but is an over-leveled #girlboss who must simply learn to connect with people! Here’s another scruffy lost king!

It’s not that every piece of invention is bad, per se. It’s just that, with the amount of text they discarded and the direction they seem to be building toward, I’m more inclined to think this started as an original story and had IP material grafted on for recognition and salability rather than anything extrapolated from the text at hand.

DYLAN: I can definitely see how this would be frustrating for someone who knows how much is being left on the table. I’m reminded of my experience with the popular J.J. Abrams Star Trek film back in 2009, a movie I really like but which was made by a combination of creators with wildly varying levels of interest in the source material. (Screenwriters Alex Kurtzman and Roberto Orci are die-hards, while Abrams himself obviously prefers Star Wars.) A lot of the superficial trappings of Trek were there, as if to satisfy a quota for fans, but mostly it was doing its own thing. (For a more perfect balance of modern blockbuster bombast and classic Trek soul, visit Justin Lin’s underrated Star Trek Beyond.)

That said, different as it was, I appreciated and continue to enjoy Abrams’ Trek for the wacky space adventure that it is, and I get the feeling that you’re not enjoying The Rings of Power enough for it to fully compensate for the feeling that it’s insufficiently Tolkien.

By tying themselves to Tolkien’s lore with one hand and writing their own generic story with the other, they’re pulling from the worst of both worlds.

JENNA: I think you’re right. I’ve resigned myself to this show being what it is, and what it is is an extremely generic fantasy tale. We have a revenge-seeking legendary soldier, a lost king, our choice between internal and external impending dooms, and a few different civilizations’ worth of political machinations. There’s some genre subversion going on with Adar humanizing (elfenizing?) his Uruk brood in the face of Galadriel’s monstrous thirst for vengeance, but that ground has been tread before by others and I don’t know how much the writers are willing to commit to it here.

Essentially: it’s all been done. Tolkien has been the blueprint for a century of western fantasy, and while this isn’t an awful entry into the canon, it’s certainly not distinguishing itself. By tying themselves to Tolkien’s lore with one hand and writing their own generic story with the other, they’re somehow pulling from the worst of both worlds. Again, it’s not even that bad, but at this stage in the game there’s simply more interesting work being done in the genre.

DYLAN: It’s funny to me that the episode that seems to have solidified your disappointment in the show is also the one that has me feeling the most on board. Granted, it’s mostly action, but it’s well-staged, well-paced, well-directed action punctuated by small human moments. As lukewarm as I am on the Arondir/Bronwyn romance, I’ve become invested in the trust that’s developed between Arondir and Theo (Tyroe Muhafidin), and in their family unit as a whole. As expected, I find Bronwyn passing leadership of her people to the promised King Halbrand to be a complete non-event (“All hail, guy we just met!”), but Halbrand and Galadriel bonding over their damage is making both characters more real to me.

And, though I understand that it’s an insane fast-forwarding of the literary timeline, the cataclysmic corruption of the Southlands into Mordor is a payoff for weeks of foreshadowing in the context of the series. Also, since there were no obligatory check-ins with the Harfoots or Dwarves this week, “Udûn” is also the tightest, most focused episode of the season.

JENNA: It was a diverting enough hour of television, but yeah, it left me pretty cold. Mordor being created via Rube Goldberg machine, Halbrand’s kingship being universally accepted based on a little pouch, Númenor’s cavalry (from their very TARDIS-dimensioned ships) arriving just in the nick of time to the one correct village out of an entire countryside… with the complete absence of any familiar lore, I was left thinking about how silly it all was. It was cool to see the various battle strategies and countermoves happen in real time, but as soon as the various fights were over I was back to being exasperated.

I’m glad you’re having fun, and there are two more episodes to pull me back in, but with the tightest episode to date, The Rings of Power may have officially lost me. 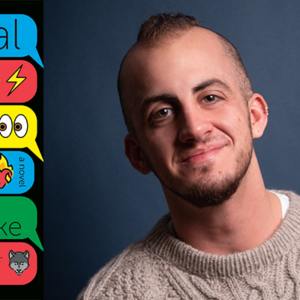 Calvin Kasulke’s Several People Are Typing is out now in paperback from Anchor Books, so we asked him about routine, empathy,...
© LitHub
Back to top