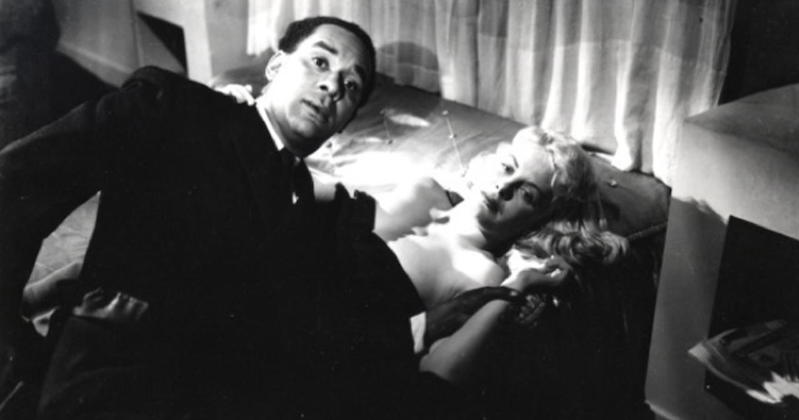 The 1951 adaptation of Native Son (starring Richard Wright) is a darkly satiric noir.

In his pained tribute to Richard Wright, “Alas, Poor Richard” (1961), James Baldwin describes his first impression of his former idol and adversary upon meeting him in Brooklyn:

My own image of Richard was almost certainly based on Canada Lee’s terrifying stage portrayal of Bigger Thomas. Richard was not like that at all. His voice was light and even rather sweet, with a southern melody in it; his body was more round than square, more square than tall; and his grin was more boyish than I had expected, and more diffident.

Baldwin wasn’t the only one to think Wright was an ill-fitting analog to the protagonist of his 1940 novel Native Son, the controversial bestseller that established Wright’s reputation in the US and abroad. The 2019 adaptation of the book starring Ashton Sanders as Bigger didn’t make much of a mark, remarkable when we think of the furor surrounding the first film adaptation. French director Pierre Chenal’s 1951 version featured Wright himself as Bigger. Wright was in his forties, some 20 years older than the character, but the filmmakers had few other options. No serious Black American actor at the time was going to risk getting blackballed by associating with Wright, a political exile in Argentina.

Native Son tells the story of a poor African-American man from Chicago’s South Side who abandons a life of crime to take a job as a chauffeur for a wealthy white family. Patriarch Henry Dalton holds stock in the real estate firm that exploits Chicago’s Black ghetto. His daughter, Mary, is a freewheeling, hapless rebel whose boyfriend, Jan, is a Communist sympathizer and opponent of Jim Crow.

Bigger escorts Mary and Jan around for a night of fun and, by the end of it, Mary is so drunk that Bigger ends up driving her home and carrying her into her room. When Mary’s blind mother comes in to check on her daughter, Bigger, terrified of what will happen to him should he be caught, covers Mary’s face with a pillow to quiet her. He ends up smothering Mary. Before cremating Mary in the basement furnace, Bigger has to cut her head off for the body to fit. The rest of the story, in both the book and the numerous adaptations that followed, is about a man who runs until the justice system catches him.

The 1951 version of Native Son was released last month for the first time in restored, uncensored form. The book, like the original film, made an enemy of American censors and was among the 20th century’s most challenged works of fiction. Though Baldwin was the book’s most famous critic, other prominent authors shared their own hesitant reception of the novel as recently as 2015. Ayana Mathis, writing for the New York Times, noted that Bigger Thomas “cannot transcend his blackness, and his blackness, in Wright’s hands, is as ugly and debased a thing as ever was.” In the same article, Pankaj Mishra wrote how relieved he was “to read Baldwin’s denunciation of Bigger’s false redemption.”

Before learning that Native Son was shot in Argentina, I suspected that nothing like Pierre Chenal’s movie could have been filmed, much less released, in the United States. The vulgarities, the innuendo, the full-mouthed kissing, the femme fatale white woman suggestively grabbing the back of Bigger/Wright’s head, the suggestion of the white woman’s decapitated head wrapped in a bundle, in a ghoulish nightmare sequence—it has the satirical qualities of good noir. It is Driving Miss Daisy meets King Kong, to be sure, but it also earns comparison, from our contemporary angle, to movies by Black directors and writers like Get Out (2017), if it kept its original ending, and Queen & Slim (2019).

Native Son is a story of fugitivity. Critics at the time excoriated Wright’s performance, and though I can understand why—Wright, no trained actor, sometimes comes off as stiff—the performance is still exceptional. Wright’s Bigger is a frowning depressive who plods through the world like a golem. He sweats heavily well past sundown and most of what covers his face is shadow.

His resignation after killing Mary is less horrific than the fear in his eyes when her mother comes in the room to find her. The real action of Queen & Slim, too, begins when a tense encounter ends with the accidental death of a white person (in that film, a police officer). As both Native Son and Queen & Slim progress, the protagonists suffer the weight of time and knowledge—despite the circumstances, they are killers before the law. Each time they miss an opportunity to confess, the axe above their necks inches closer.

One of the many reasons Native Son stunned audiences was the story’s ambivalence on the question of Bigger’s criminality. He was legally a criminal, but what was the origin of the crime? Was it some quality immanent to Bigger, to the Black man more generally, or was it the circumstances of his birth that sent him down this spiral? It is the kind of uncomfortable question that most people still don’t like to address. When they do, the responses come with many qualifications.

For many people, Native Son was an introduction to the concept of systemic racism. Though Bigger Thomas’s detractors take issue with his stereotypical, or some would say archetypal qualities, Wright’s performance is one of distinct anguish. I could never escape the awareness that I was watching the author inhabit the representative of his fury and frustration. Native Son is a humorous film with few laughs, one that feels both unfortunately modern and not as maudlin as it sometimes wishes it could be.