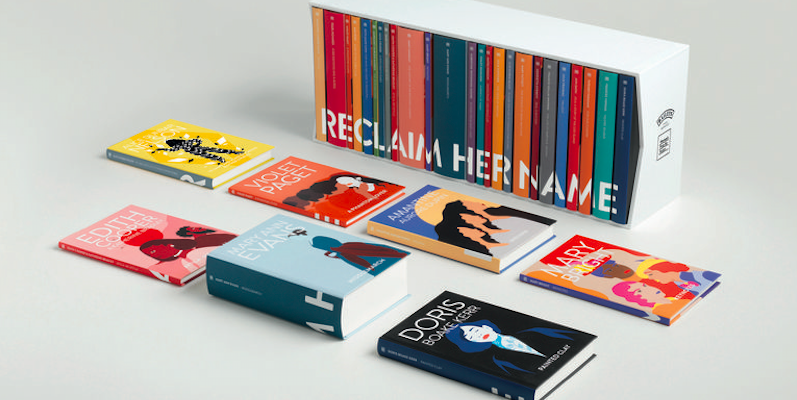 The #ReclaimHerName initiative ignores the authorial choices of the writers it represents.

The Women’s Prize for Fiction recently debuted an upcoming project which will mark the 25th anniversary of the prize: an initiative called “Reclaim Her Name” (#ReclaimHerName) which republishes famous works by twenty-five female authors who published under male nom-de-plumes in the 19th and early 20th centuries, including George Eliot, George Sand, Vernon Lee, and Arnold Petri. The thing is, the initiative is republishing these books using the authors’ given, female names, rather than their male pseudonyms. Many have applauded this initiative. No. Stop applauding. Stop applauding now.

To celebrate our 25th anniversary, we teamed up with @BaileysOfficial on something very special.

Produced in collaboration with the Woman’s Prize’s longtime sponsor Bailey’s Irish Cream, the initiative presents itself as redeeming an unsavory aspect of history, paying service and giving credit to women whose “true” selves were erased from publishing history. The thing is, the eager but lumbering feminism behind this initiative ignores that all of these women chose to publish under male pseudonyms. This initiative’s insistence on using their female names blatantly ignores their own decisions about how to present their works, and in some instances, perhaps even how to present themselves.

As scholar Claire Jarvis pointed out on Twitter, this initiative promotes a common misconception about writing of the past—that women were somehow forbidden from writing under their own names. (I’m thinking of those “for most of history, anonymous was a woman” magnets they sell at the Strand.)

The idea women couldn’t publish under their birth names is ridiculous. Women could and did publish writing in the c18 and c19 under their own names. When people choose pen names, we should respect those investments. People did it for a lot of reasons!

Indeed, many women writers publishing in the 18th and 19th centuries, from Mary Wollstonecraft to Elizabeth Barrett Browning, used their own names. Some chose to use their initials, like Elizabeth Gaskell and Mary Elizabeth Braddon. Some women writers chose female pseudonyms; for instance, the woman known in life as Sara Willis wrote under the name Fanny Fern. It’s a common misconception that women had to hide their identities just to be published.

All of these writers also had different reasons for wanting to present their books with male pseudonyms, including perhaps desires to present their own selves with male names. It doesn’t do much good to speculate about sexualities of the past, and apply anachronistic labels and designations in the process, but we can appropriately infer that, for example, insisting on calling Vernon Lee by the female name that she deliberately disavowed in her own life participates in a kind of erasure of a personal declaration of identity that, if it were done today, would be considered deadnaming (insisting on using the birth name of a transgender person who has chosen a different name).

Delving deep into the personal histories of these writers might have offered some guidance that could have revealed the problematic generalizations germane to the Reclaim Her Name project (including, by the way, the use of the pronoun “her,” since many of these writers might not have even understood or identified with their womanhood in the same ways). But the only generalization worth making about this initiative is to say that all these women chose the names they wanted, and the Reclaim Her Name initiative has not only ignored these wishes but presented its anthology as rescue from the patriarchal annals of history. But ignoring historical articulations of women’s autonomy, authorial intent, and even gender identity in some swashbuckling attempt at historical revisionism is ultimately the most patriarchal thing of all.

Kate Mosse, the director of the Women’s Prize, has a lot of reasons for putting together the collection in the manner that her team did. She quotes Charlotte Brontë, whom she claims wrote under the male pseudonym Currer Bell saying that “Authoresses are liable to be looked on with prejudice; we had noticed how critics sometimes use for their chastisement the weapon of personality.” Mosse overgeneralizes with her contextualization—it’s worth noting that all the Brontë sisters wrote under pseudonyms (Currer Bell for Charlotte, Ellis Bell for Emily, and Acton Bell for Anne—three alter-egos they had since childhood, which is a different kind of identity than simply a male literary pseudonym intended to eliminate reader prejudice). Furthermore, Mosse is incorrect about this one—Currer Bell was presented as an editor of Jane Eyre, since that book was actually published as “an autobiography” of its eponymous woman character. So, female authorship under a female name.

Anyway, Mosse tells us that there seems to have been many reasons why a woman would choose to publish under a man’s name (ahem), citing “safety,” because “in countries where women were not even allowed to read or write, let alone publish, obviously, you simply couldn’t possibly publish as a woman, it was an illegal act.” Here, she references the poems published under the name Shahein Farahani in 19th-century Iran. This is a very different context to place next to the circumstances surrounding George Eliot’s pseudonym (which was well-known to be a false name during her public writing life, and posed no danger to her whatsoever). I’m always a little leery of a white woman describing the Middle East as dangerous or backwards to justify a pro-woman-presenting stance, so I’ll just say now that I think this anthology needs to do way more work distinguishing and illuminating the contexts behind the books it has included.

While this collection includes several writers of color, it has also whitewashed one and misrepresented the degree to which the writer used a male pseudonym at all. The journalist Pema Monaghan looked at the bibliography of the writer whose male pseudonym is listed as Mahlon T. Wing and whose female name is listed as Edith Maude Eaton, pointing out that this writer, who was mixed-race, actually published under her preferred female name Sui Sin Far rather than her English given name. The only time she published under a male pseudonym was to write this book (this book which uses a slur in its title, by the way, as Monaghan points out later in her thread).

Okay there are so many broad and specific issues with this, but i want to highlight 1. This writer went mostly by the name Sui Sin Far and was half Chinese. She published many books, and only one under the name Mahlon T. Wing, as far as I can tell, this book below (1) https://t.co/0VpbbYrlob pic.twitter.com/ZMbkX1pMF9

Mosse has mentioned that research for this project was completed by researchers from Bailey’s Irish Cream (I’ll be honest, I don’t know what this means or who this could be referring to). I’m not able to get into all the issues with it, here. But let me just say, to wrap up, that this collection has not been formally edited or researched by actual scholars whose input could have helped shape this initiative into something much more productive and less diminishing. A project exploring different women writers who chose male pseudonyms, complete with strong contextualization and historicization of their choices, and which published their stories in well-annotated critical editions under the intended pseudonyms, might have been funds better spent than this attempt (for those interested in something more like this, may I present Orlando). This attempt compresses numerous historical and social experiences of womanhood and pretends male-literary presentation was a manifestation of female oppression all across the world and throughout time. But it wasn’t. Not at all.