The Reality of Post-Chernobyl Life: Way More Complicated Than a TV Show

Notes From a Reporter Who Was There

What people tend to forget about Chernobyl is that after it became the site of the world’s worst nuclear disaster in 1986 it kept operating for 14 more years. The explosion occurred in one of four reactors at the Chernobyl Nuclear Power Plant. It was buried under a 300,000-ton metal and concrete sarcophagus. The other three reactors kept working.

When it was announced that the plant would shut down for good on December 15th, 2000, the international community was ecstatic. The reaction in Ukraine was more nuanced.

Although it had no authority in the matter, the Ukrainian parliament voted to postpone the closure. In Slavutych, a Ukrainian town in which 5,000 of the 26,000 residents worked at the plant, there were protests.

This response might seem strange to those who have watched the HBO miniseries Chernobyl. The show highlights the callous way the Soviet government treated its citizens, leaving viewers with the impression that survivors would never want to see Chernobyl again. The reality of post-Soviet life was more complicated.

Shutting down Chernobyl did not take away what had happened and what had been left behind. The damaged reactor was still there and in need of a new covering, which was being built. What the shutdown meant in immediate terms was the loss of electricity and jobs.

Although only one reactor was still working at the time, it generated 5 percent of Ukraine’s electricity. Power outages were common in the countryside, and the shutdown meant they would likely become even more frequent. It also meant the sudden loss of 1,000 jobs and the eventual phasing out of thousands more. Many of those who had been relocated after the disaster would have to relocate once again, this time because there was no longer work for them at the power plant.

I know all this because I was there. I boarded a bus in the Ukrainian capital of Kyiv in the pre dawn hours the day before the plant’s planned closure. Along with around 200 other journalists from around the world I was headed to the site of the world’s worst nuclear disaster and the surrounding region. It wasn’t my first trip to Chernobyl, or my last.

Since moving to Ukraine less than a year before I had appointed myself the unofficial Chernobyl beat reporter for the English-language newspaper where I worked. I even made a point of touring other Soviet-era power stations in Ukraine. There were others, although Chernobyl was the last Soviet-designed RBMK reactor still running in the country. I don’t know why I was so bent on writing about nuclear disasters, expect that I was young.

The Ukrainian president at the time, Leonid Kuchma, focused on Chernobyl for a different reason. The two-day festivities he planned surrounding the closure served as a distraction from the allegation that he had something to do with the disappearance of opposition journalist Georgy Gongadze.

A headless corpse had already been found, but the Ukrainian government continued to deny it was Gongadze’s. Later, after the body was identified as Gongadze’s, the government would claim Gongadze was killed in a robbery attempt despite the release of taped conversations between Kuchma and other government figures on how to stop Gongadze. One idea was to have him kidnapped by Chechens.

As the residents of Slavytch once again faced evacuation they knew better than to believe the government’s promise that it would bring aid and new jobs to their town.

Instead of answering questions about Gongadze, Kuchma organized concerts and made grand speeches. He announced that by shutting down Chernobyl he was making a national sacrifice for the sake of global safety. In that way I guess the storyline hadn’t changed that much from the HBO series. The government, though no longer Soviet, still demonstrated a heartless disregard for the welfare of its citizens.

Still, viewers would probably be surprised to learn that less than a decade and a half after the disaster the government only compensated victims for 10 percent of their medical care and rehabilitation. They also offered limited help to the 91,000 evacuees forced to leave what became known as the exclusion zone, a 30-kilometer radius around the nuclear power plant. Those who worked at the plant mostly went to Slavytch. Others from the two towns—Prypiat and Chernobyl—and 74 villages within the zone were evacuated further away, with residents split up among different villages.

Evacuees I spoke with in 2000 reported hastily constructed new homes with leaky roofs, cracked floors and peeling paint. They complained that little thought had been given to employment, citing the example of a former teacher who was relocated to a village where all the teaching jobs had already been filled. In many cases they were treated with hostility and distrust instead of sympathy. This prejudice is another aspect of the aftermath you don’t anticipate from the miniseries. That is because it is a prejudice bred out of the desperation of post-Soviet life, a time the miniseries cannot tackle because it ends before the Soviet Union fell.

Chernobyl may have helped bring about that ending. But by the time of Chernobyl’s closing in 2000 any optimism that things would be better for everyday Ukrainians after the fall of the Soviet Union had been soured by years of hyper-inflation, utility and goods shortages, and government corruption and indifference.

As the residents of Slavytch once again faced evacuation they knew better than to believe the government’s promise that it would bring aid and new jobs to their town. One woman joked that they should return to Prypiat, the city they had been forced to flee in 1986—the same city featured in the miniseries.

In 2000 it didn’t look that different. Soviet slogans like “work will set you free” still covered apartment walls. Only now trees blocked doorways, vines grew out of windows and roads were empty. Instead of pet dogs being killed off, the 600 or so mainly elderly residents living illegally in the zone reported seeing wild pigs and wolves. Except for the few homes occupied by these elderly returnees the rest of the buildings remained empty.

Calendars were stuck on April 1986 and pictures and posters featured people with big hair. That was all that was left inside, anything of value having already been stolen. Furniture, electronics and even the metal pipes and wiring were taken and resold, desperation outweighing fear of contamination.

The summer before, an eerie reminder of the Chernobyl response had played out with the Russian submarine Kursk. The Kursk left port on August 10th and after being rocked by two explosions sunk to the bottom of the ocean on August 12th. International help was offered, but not immediately accepted. All 118 men onboard were declared dead by August 21st.

In the Crimean port city of Sevastopol, then part of Ukraine, more than a dozen families lost sons in the tragedy. Some of the families learned of the death of their loved one through news accounts. Letters written by those who survived the initial blasts were not given to the wives to whom they had been written. Half a year later only one body had been returned to Sevastopol.

While talking with the Sevastopol families I was reminded of the Chernobyl disaster. Both times the government made decisions based on how they would be perceived and not on what would happen to their citizens.

In truth the same can be said of the plant’s shutdown. Kuchma shut down the nuclear power plant so he would look strong in the eyes of the international community. Fourteen years after the disaster and nine years after the fall of the Soviet Union little had changed. For the politicians pulling the strings the play had already been written and what befell the individual actors on stage was of little concern.

I guess that is what made Chernobyl such a great miniseries in the first place. It captures the indifference of party members to the plight of their people perfectly and hints at how some of those people feel the same indifference towards the government.

The scene that stays with me is that of an old woman, a babushka, milking a cow. The woman is told she needs to evacuate, but she ignores the order and continues milking her cow. She does not beg, plead or show any emotion, she simply continues to milk. As she does so she lists all the events she has already survived: revolution, famine and war. Unsure how else to get her to leave, the soldier charged with evacuating the region shoots the old woman’s cow.

Even after the cow has fallen you see the old woman’s hands, still held out as if they are milking. She does not scream, she does not cry, she does not utter a word. For the woman, and for many Ukrainians, Chernobyl was just one more injustice they would have to endure and survive on their own. 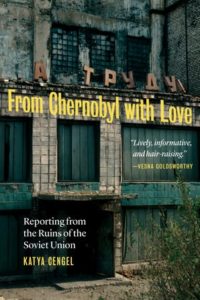 Katya Cengel’s book From Chernobyl with Love is forthcoming from University of Nebraska Press.

Katya Cengel is a freelance writer and lectures in the Journalism Department of California Polytechnic State University, San Luis Obispo. She was a features and news writer for the Louisville Courier-Journal from 2003 to 2011, and her work has appeared in the New York Times Magazine, the Wall Street Journal, the Washington Post, Marie Claire, and Newsweek. She is the author of Exiled: From the Killing Fields of Cambodia to California and Back (Potomac Books, 2018), Bluegrass Baseball: A Year in the Minor League Life (Nebraska, 2012), and From Chernobyl with Love (Potomac Books, 2018).

Is the Age of Automation the New Industrial Revolution?

In Search of Hysteria: The Man Who Thought He Could Define Madness 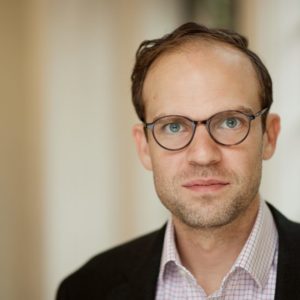 Is the Age of Automation the New Industrial Revolution? In this episode of Keen On, Andrew talks to Carl Benedikt Frey, the co-director of the Oxford Martin Programme on Technology...
© LitHub
Back to top
Loading Comments...