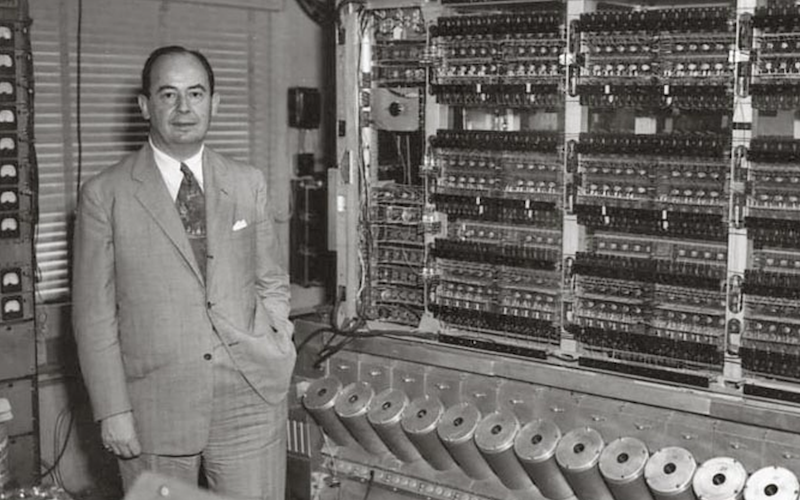 Ananyo Bhattacharya on the Brilliance of John von Neumann

Call me Johnny, he urged the Americans invited to the wild parties he threw at his grand house in Princeton. Though he never shed his thick Hungarian accent, von Neumann felt that János—his real name—sounded altogether too foreign in his new home. Beneath the bonhomie and the sharp suit was a mind of unimaginable brilliance.

During a life cut short by cancer, von Neumann laid the foundations of quantum mechanics, founded modern game theory, helped design the atom bomb, drafted the blueprint for every modern computer from smartphone to laptop, and with Klári Dan, his second wife, wrote the first truly useful, complex programs ever to have been executed.

Von Neumann’s machine at the Institute for Advanced Study in Princeton would spawn the first generation of modern computers worldwide including the IBM 701, the company’s first commercial model, and his refusal to patent anything helped birth the open source movement. But not content with computers that merely calculated, he proved during a lecture in 1948 that these information-processing machines could, under certain circumstances, reproduce, grow, and evolve. Even on his deathbed, he wrote lectures comparing computers and brains that built a bridge between neuroscience and computer science for the first time.

Fearing a catastrophic third world war, von Neumann supported a pre-emptive strike against Stalin’s Soviet Union. He changed his mind  but not before becoming one of a handful of scientists who inspired Stanley Kubrick’s Dr Strangelove. The caricature has overshadowed his astonishing achievements, prescience and impact, which have been all but forgotten.

He was one of a handful of scientists who inspired Stanley Kubrick’s Dr Strangelove… The caricature has overshadowed his astonishing achievements.

“He died so prematurely,” his friend, the mathematician Stanisław Ulam, said, “seeing the promised land but hardly entering it.” Some sixty-five years after von Neumann’s death, we are just beginning to glimpse his promised land ourselves.

Over lunch in Los Alamos in 1950, Enrico Fermi suddenly asked his friends, “But where is everybody?” Everyone burst out laughing. Fermi had been thumbing through a copy of the New Yorker and come across a cartoon blaming the recent disappearances of dustbins on extraterrestrials. The “Fermi Paradox” is the name now given to the conundrum of why the human race has not made contact with any alien species despite some estimates suggesting they should be legion in our galaxy. Thirty years later, Frank Tipler “solved” this paradox. Given that at least some intelligent beings would be expected to develop self-replicating machines, Tipler asks, and the billions of years such von Neumann probes would have to crisscross the galaxy, why has there been no trace of one detected in our solar system? His conclusion is that human beings are the only intelligent species in the cosmos.

Von Neumann thought we were alone too. Shortly after Hiroshima, he had remarked semiseriously that supernovae, the brilliant explosions caused by massive stars collapsing in on themselves, were advanced civilizations that “having failed to solve the problem of living together, had at least succeeded in achieving togetherness by cosmic suicide.” He was keenly aware of the various ways in which his work might ultimately contribute to humanity’s undoing. In coining the term “singularity,” in conversation with Ulam, von Neumann imagined a point ‘in the history of the race beyond which human affairs, as we know them, could not continue’. Whether that would be in a negative or positive sense remains a matter of debate: thinkers have variously speculated that an artificial superintelligence might end up fulfilling all human desires, or cosseting us like pets, or eradicating us altogether.

The cynical side of von Neumann’s personality, shaped by his scrapes with totalitarianism and made famous by his transitory enthusiasm for preemptive war with the Soviets, often yielded to a softer face in private. “For Johnny von Neumann I have the highest admiration in all regards,” said neurophysiologist Ralph Gerard, a contemporary of his. “He was always gentle, always kind, always penetrating and always magnificently lucid.” Shy of revealing too much of himself, his good deeds were quietly done behind people’s backs. When a Hungarian-speaking factory worker in Tennessee wrote to him in 1939 asking how he could learn secondary school mathematics, von Neumann asked his friend Ortvay to send school books.

He was keenly aware of the various ways in which his work might ultimately contribute to humanity’s undoing.

Benoît Mandelbrot, whose stay at the IAS had been sponsored by von Neumann, unexpectedly found himself in his debt again many years later. Sometime after von Neumann’s death, prompted by a clash of personalities with his manager at IBM, Mandelbrot went looking for a new job—and found that the way had been made easier for him. Von Neumann had spread the word widely that his research could be of great significance—but was very risky. “He may really sink,” von Neumann warned them, says Mandelbrot. “If he’s in trouble, please help him.”

Which of these was the real von Neumann? “Both were real,” Marina says. But the dissonance between them confused even her, she admits. Beneath the surface the two facets of his personality were at war. Von Neumann hoped the best in people would triumph and tried to be as magnanimous and honorable as possible. But experience and reason taught him to avoid placing too much faith in human virtue.

Nowhere is the tug-of-war between the cool rationalist and kind philanthropist more evident than in von Neumann’s remarkable meditation on the existential threats facing humanity in the decades to come. Published in June 1955 in Fortune magazine, “Can We Survive Technology?” begins with a dire warning: “literally and figuratively, we are running out of room.” Advances in domains such as weaponry and telecommunications have greatly increased the speed with which conflicts can escalate and magnified their scope. Regional disputes can quickly engulf the whole planet. “At long last,” he continues, “we begin to feel the effects of the finite, actual size of the earth in a critical way.”

Long before climate change became a widely discussed concern, the essay shows von Neumann was alert to the idea that carbon dioxide emissions from burning coal and oil were warming the planet. He favored the idea of coming up with new geoengineering technologies to control the climate by, for example, painting surfaces to change how much sunlight they reflect—quite likely the first time that anyone had talked about deliberately warming or cooling the earth in this way. Interventions such as these, he predicts, “will merge each nation’s affairs with those of every other, more thoroughly than the threat of a nuclear or any other war may already have done.”

Von Neumann speculates that nuclear reactors will rapidly become more efficient and held out hope that mankind would harness fusion too in the long term. Automation would continue, he predicted, accelerated by advances in solid-state electronics that will bring much faster computing machines. But all technological progress, he warns, will also inevitably be harnessed for military use. Sophisticated forms of climate control, for example, could “lend themselves to forms of climatic warfare as yet unimagined.”

Preventing disaster will require the invention of “new political forms and procedures” (and the Intergovernmental Panel on Climate Change, established in 1988, arguably embodies one attempt to do exactly that). But what we cannot do, he says, is stop the march of ideas. “The very techniques that create the dangers and the instabilities are in themselves useful, or closely related to the useful,” he argues. Under the ominous heading “Survival—A Possibility,” he continues: “For progress there is no cure. Any attempt to find automatically safe channels for the present explosive variety of progress must lead to frustration. The only safety possible is relative, and it lies in an intelligent exercise of day-to-day judgment.”

There is, as he puts it, no “complete recipe”—no panacea—for avoiding extinction at the hands of technology. “We can specify only the human qualities required: patience, flexibility, intelligence.” 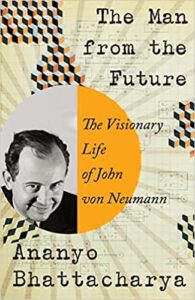 Ananyo Bhattacharya, who holds a PhD in physics from Imperial College London, has worked as a science correspondent at the Economist, an editor at Nature, and a medical researcher at the Sanford Burnham Prebys Medical Discovery Institute in San Diego, California. He lives in London

How Much Was WWI About... Bread? 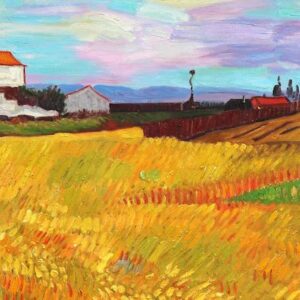 How Much Was WWI About... Bread?

Stories about the Great War of 1914 to 1918 often begin with an account of German aggression. But the war’s cause also...
© LitHub
Back to top
Loading Comments...