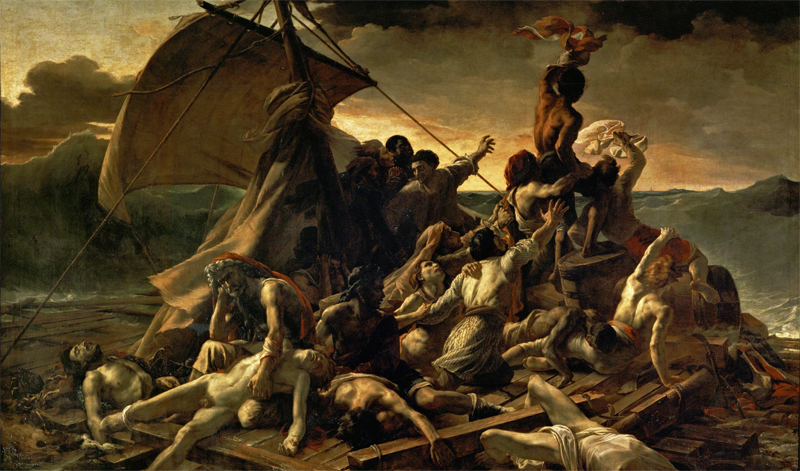 The Raft of the Medusa: A Cautionary Tale from Tom Stoppard

"If we don't cooperate, we're screwed"

By misfortune, they had struck the reef at high tide, and as the seas grew violent, attempts to free the ship failed. The frigate was assuredly lost: It was decided to build a raft. A raft was made, and well made. One hundred and fifty was to be the complement of the raft. Those onboard had wine, a little brandy, some water, and a small portion of sodden biscuit. They had been given no compass or chart. With neither oars nor rudder, there was no means of controlling the raft.

In the first night, a storm got up and threw the machine about with great violence. By daybreak, the air was filled with cries, and all prepared themselves for death. The next day, the seas were calm, and for many, hope was rekindled. It was during this day that those on the raft began to experience their first delusions. Some fancied that they saw land, others thought they espied vessels coming to save them.

The second night was more terrible than the first. A group of men, certain that they were lost, broke open a cask of wine to soothe their last moments by abandoning the power of reason, in which they succeeded, until the seawater spilled and spoiled the wine. Thus doubly maddened, these disordered men determined to send all to the common destruction, and to this end attacked the ropes that bound the raft together. The mutineers being resisted, a pitched battle took place among the waves and the darkness of the night before order was restored. But at midnight, the soldiery rose again, and attacked their superiors with knives and sabers. Men were thrown in the sea, bludgeoned, stabbed. Two barrels of wine were thrown overboard and the last of the water. By the time the villains were subdued, the raft was laden with corpses.

The third day was calm and fine. They took repose, but cruel dreams added to the horrors already inflicted by hunger and thirst. The raft now carried less than half of its original complement.

On the fourth morning, they perceived that a dozen of their fellows had died in the night. The bodies were given to the sea, except for one, that was reserved against their hunger. It was from this day onwards that all learned to consume human flesh. The next night was to bring a fresh supply: Once more, a terrible combat ensued and blood washed over the fatal raft. There remained no more than thirty onboard. Barely a man lay without wounds into which salt water constantly flowed and piercing cries were heard.

On the seventh day, two soldiers concealed themselves behind the last barrel of wine. They struck a hole in it, and began to drink. On being discovered, they were thrown and cast into the water. Now the most terrible decision had to be taken. On counting their numbers, it was found that they were twenty-seven. Fifteen of these were likely to live for some days. The rest, suffering from large wounds, and many of them delirious, had but the smallest chance of survival. After a debate in which the most dreadful despair presided, it was agreed among the fifteen healthy persons that their sick comrades must, for the common good of those who might yet survive, be cast into the sea.

After this cruel sacrifice, the last fifteen survivors threw all their arms into the water, reserving only a saber, lest some rope or wood need cutting. Under the burning sun, a raging thirst consumed them, until they began to moisten their lips with their own urine. Sharks now surrounded the raft, and some soldiers, in their derangement, openly bathed within sight of the great fish.

On the thirteenth day, the sun arose entirely free from clouds. The fifteen wretches had put up their prayers to the Almighty, and divided amongst them the portion of wine, when a captain of infantry, looking towards the horizon, descried a ship. An offering made thanks to the Lord. They straightened barrel hoops and attached handkerchiefs to the ends. For half an hour, they lay suspended between hope and fear. Then the ship disappeared from the sea. There passed two hours among the most cruel reflections, when the master gunner looked up and saw the Argus half a league distant, carrying a full press of sail and bearing down upon them. The fifteen survivors were taken up onboard. The command- er and the officers onboard rekindled in them the flame of life.Two who later recorded their account of the ordeal concluded that the manner in which they were saved was truly miraculous, and that the finger of Heaven was conspicuous in the event.

As it happened, while I was trying to think about best-case and worst-case scenarios, I read Julian Barnes’s essay about Géricault’s great painting, known to us as The Raft of the Medusa (he himself called it Shipwreck at Sea). In my heavily truncated paraphrase of the description of what occurred on this raft, you will easily get a sense of the horrors which the people on the raft had to endure. Perhaps you, as with me, found there was an almost irresistible pull of allegory here: Yeah, we are all on the raft.

There is, however, an outstanding question to be resolved, which is: Would this be an allegory for the best-case scenario, or would it be an allegory for the worst-case scenario? The worst case might not be so bad: It tends to show that things will get worse before they get better, but they will get better. The best case? Well, that might not be so good. If the best that can possibly happen is that the Argus, the frigate on the horizon, will show up, then less good than that, the frigate may not show up.

I think that the fact that one can ask which case the allegory might apply to is quite telling. It’s telling us we are not trapped in our narrative, the way that the poor souls on the raft were trapped in theirs. The causes of that disaster were both ultimate and proximate. There was bad navigation to begin with, and the frigate struck the reef; there was also bad organization in the immediate, consequent actions of the men onboard. But above all, the proximate causes were our behavior towards each other. This is the crux of the allegory, and what it ought to mean to us.

One tenth of the people on that raft survived. The Medusa set sail in July 1816, and all this happened soon after that. What was operating on that raft was our famous, indefatigable, relentless desire to preserve ourselves. With cooperation, it’s easily possible that nine tenths of that hundred and fifty rather than one tenth would have survived. I think that what I would like to take from this rather double-focused look at the best and worst that might be to come—I would like to take the story of The Raft of the Medusa as a morality tale, a cautionary tale. I think what it’s telling us is that if we don’t cooperate, we’re screwed. We’re sunk. We have to live our lives on the raft as a contest of generosity, and that way, and only that way, we might survive.

Tom Stoppard is the author of more than twenty plays, including Rosencrantz and Guildenstern Are Dead (Tony Award), Jumpers, Travesties (Tony Award), Night and Day, After Margritte, The Real Thing (Tony Award), Enter a Free Man, Hapgood, Arcadia (Evening Standard Award, The Oliver Award and the Critics Award) and The Invention of Love. He lives in London. 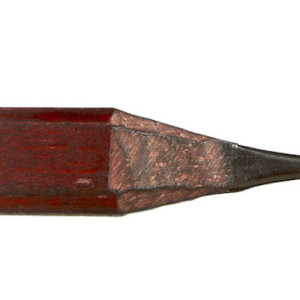 When I turned 30, I took my first short story workshop. I was working in commercial banking, a career I fell into with indifference...
© LitHub
Back to top