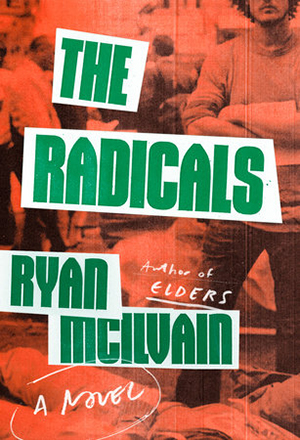 The following is from Ryan McIlvain's novel, The Radicals. Eli and Sam are graduate students at NYU, two friends who bonded over their love of poetry and commitment to socialism. Their idealism is put into practice as they join an Occupy-like group in protest against a large energy company. Ryan McIlvain's first novel Elders was longlisted for the Center for Fiction's First Novel Prize.

A quarter only got you ten minutes here, but I supposed we’d been lucky to find a parking spot at all. Lower Manhattan, late September. The air studiously neutral, at last emptied of the humid frenetic energy that had made of the city a kind of particulate snow globe in the last few weeks. There was even a slight cool breeze issuing down this uniconic stretch of Wall Street, so narrow and dark with shade that the breeze might have been a low whistle through a pair of pursed lips. The city moved vertically here, two-dimensionally, with the buildings dragging cornices and pretentious friezes up their long gray lengths, and lower down chunky iron lanterns jutting out like uncovered limbs—again my doomy imagination in these nether realms of the city.

Two middle-aged men in shirts and ties, black shoes and pants, gelled hair, moved past me under the temporary construction pavilion that hugged the building to our left across its entire length and gave the Buick that much more protection. One of the men gave me a quick incurious look. When he and his colleague were farther down the street I heard a rapping sound behind me and turned, Sam cranking down the window.

“What the hell are you doing?”

“Just go feed the meter, okay, and get back here. The more time you stand there, the more people see you, the more likely one of them is to remember you. Put an hour in, forget the time limits. This is taking longer than usual. And Eli?”

For a moment I had to stifle a laugh. There was an uprush of pleasure in me (or was it pride? relief?) to think that Sam might be more nervous than I was. People would remember me doing what exactly—standing by a car? And for what reason? And who would ask them to remember? This was the easy part, the least risky element in a hugely risky, evolving plan, a plan that evolved more risk with each after-dinner strategy session at the Phoenix House. Other big-shot businessmen, other deposed kings of industry kept their names in the conversation (Jamaal still talked a lot about O’Bannon, for example), but Bosch and his unpunished crimes, his local address, made him the frontrunner for retribution. One night in an excess of beery courage Greg gathered his pale pinched features under the overhang of his brow and said we should just kill Larry Bosch, shouldn’t we? Make an example of him? The collective intake of breath around the table gave way to nervous laughter, with Greg leading the charge, assuring us he was just kidding, just fucking around—we all knew that, right? Not murder, then, but it didn’t have to be. Political theater could be high stakes enough. If we couldn’t hold our nerve standing outside a car under a plywood construction awning, or use a credit card instead of quarters to secure a parking spot (Sam worried a card would be traceable), then what hope did we have of abducting a millionaire dozens of times over, probably a bodyguarded millionaire, and then holding him—what?—for ransom? For a publicity stunt? For the hell of it? The plan was still evolving, we told ourselves.

“There was an uprush of pleasure in me (or was it pride? relief?) to think that Sam might be more nervous than I was.”

At the green box of a parking meter I slid in the last of my quarters, coming up well short of an hour. We’d been here since two o’clock, it was almost five now, and I’d emptied a bulging pocketful of change into this mute dumb machine. Up ahead on the sidewalk, just past the construction awning, an old-fashioned hot-dog vendor stood under a plain blue umbrella. He was short and compact in a clean white apron, wearing a black Yankees cap and a mustache, working what looked like a large chrome icebox with a grill attached to it. I started toward him, my eyes casually lowered. I remembered the sunglasses parked atop my Mets cap, put them on. At the stand itself I kept my head bowed, pretending to deliberate over the row of prismatic water bottles, sodas, Gatorades, iced teas, the bottles catching the light as the sun leaned into view at the far end of the street. The man’s grill was clean and tidy, with little mounds of white onions caramelizing in one corner. Old Marco from the sub shop, unmissed Marco—I hadn’t seen him in two months though I’d come home to Jen and Mallory with many fabricated stories about his micromanagerial zeal, his Napoleon complex—old Marco would have been impressed. To Jen and Mallory I’d started paying a slightly larger share of the rent, by the way, from my parents’ largesse. (I claimed the money came from the extra hours I was working at Tommy’s.) I’d had a birthday recently, complete with a surprise visit from my parents, a trip to the U.S. Open with Jen, then a chance at a private dinner to lay on my parents a true enough sob story about job-market difficulties, rising rents, falling grad school stipend levels, etc. I came away from that night with a ten-thousand-dollar check—a loan, my parents stressed, though they’d been thinking about something like this for a while. I think they worried I wouldn’t accept the money if it were presented as a gift—I think of this queasily now, guiltily.

“Two hot dogs with onions, please,” I told the vendor without lifting my eyes to him. I watched the spatula expertly slide under one of the caramelizing mounds, then another, then drop the confetti-like brownish onions along the length of the buns.

“Actually, add these in too,” I said, taking two Gatorade bottles down from the row and passing along a twenty-dollar bill. “How about three dollars in quarters and you keep the change?”

I thanked him for the food and the quarters and started back for the parking machine.

“You guys don’t stand a chance, you know,” he called after me.

In my surprise I turned around and took the man in directly, his wide dark face and the high-peaked cap, the darker mustache like a sea creature under his nose, thick and bristled, slightly shining.

“You guys don’t have a chance. Face it.” He gestured at my hat.

“You were lucky to get out of the division series. I take Atlanta in four.”

“Well, we’ll see, we’ll see,” I said, and turned away. I’d all but soaked through the thin waxed paper cradling the hot dogs by the time I got back to the car, my sweat glands stoked at an instant and not to be calmed anytime soon.

Sam did nothing to hide his anger. “Did you give him your driver’s license? Your Social Security number? A DNA swab?”

“You could see all that, huh?” I handed over the hot dog and the fruit-punch Gatorade. “You’re welcome, by the way.”

“You learn how to use your mirrors when you do this enough. And how not to be flagrantly stupid.”

“I figured we needed more change, okay? We need to eat too, don’t we? You’re welcome.”

“Sure thing, comrade,” Sam said through a mouthful of hot dog, the bite bobbing in his cheek like a mound of chewing tobacco, unmannerly and crude. It would have seemed out of character for Sam, except that lately Sam seemed to be permanently out of character. For now he kept his blue-gray flat eyes trained on the high-mounted small rearview mirror. He wore the same black Roger Federer hat—blackish gray—with the sweat stains wavering along the brim and the faded edges as if the hat had been dipped in salt water. Of course it hadn’t been dipped in any water—that was the problem.

From The Radicals. Used with permission of Hogarth. Copyright © 2018 by Ryan McIlvain. 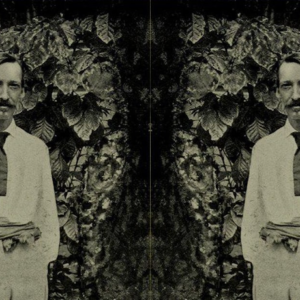 Lit Hub Weekly: February 20 - 23, 2018 “Criticism is the thing that’s going to make you better at what you do.” YA author Keira Drake on rewriting...
© LitHub
Back to top