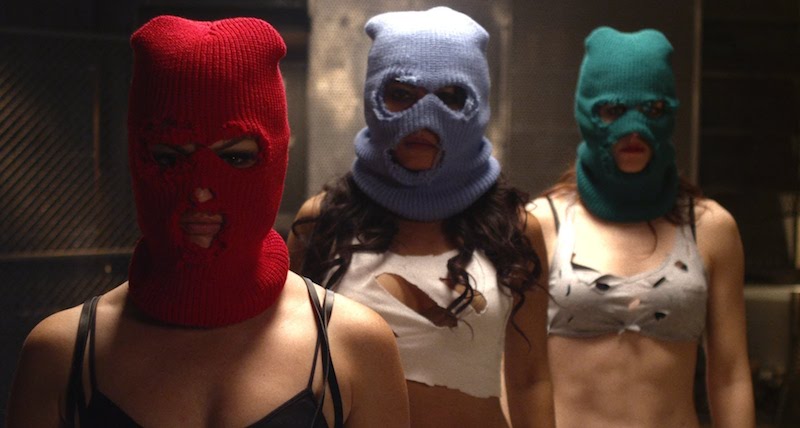 The Radical Bookseller: We’re Talking About the Wrong Pussy

As the third and final presidential debate looms night, I find myself thinking of the scandal that preceded the second debate: namely, Donald Trump bragging about grabbing pussy. The morning after that town hall event, Chris Lehmann, editor of The Baffler, wondered aloud why Hillary didn’t have the band Pussy Riot in the audience as a very public, punning retort to the Donald’s lighthearted embrace of sexual assault. It was a throwaway line, but is that even an obvious association for people to make? Does the public understand the actual and ongoing force of punk-rock dissent that is Pussy Riot?

Earlier this year Pussy Riot came to Buffalo on a national tour. Karen Finley, performance artist and contributor to Pussy Riot! A Punk Prayer for Freedom, published by the Feminist Press, served as moderator to an incredibly intense discussion about patriarchy, paternalism (religious and other), totalitarianism, freedom, performance art as political commentary, and the risks associated with Pussy Riot’s forceful and unapologetic attack on the Church and government. They spoke about being jailed and the hope that we—the audience—would contribute to their cause by buying a T-shirt and visiting their website, while also imploring us to help them do their work in an increasingly hostile environment. They then showed a video of their first song in English: “I Can’t Breathe,” dedicated to Eric Garner (below).

The tour was unsuccessful. These incredibly smart, brave women had to cancel events in both Chicago and New York City due to lack of interest, or lack of a venue—forcing the question of the relevance and role of the international activist in today’s USA, and that of collective memory as a force for change. Were people too busy to pay homage to the women doing the hard work of political change in a country that jails dissenters and is quickly becoming our Cold War (the sequel) opponent?

And let’s take Lehmann’s joke seriously for a moment, and imagine Pussy Riot in the front row, offsetting the quartet of Bill Clinton accusers flown in by Trump: having victims of Putin, front and center, would have illuminated the commonalities between the Donald and the Vladimir, and would have given Hillary an opportunity to draw a parallel between the regressive immigration policies of the dictator and his would-be dictator friend in America, further highlighting their shared attitudes towards Muslims and women, and their mutual fear of dissent. I am certain Hillary could have given examples of their equally outrageous bloviation and ridiculous self-promotion.

Joy Harjo, Native American poet, writer, activist, and feminist, sums up what this strategy would have achieved: “to subvert and reclaim the enemy’s language.”

Slang is frequently used to demean. It is never ok to talk about assaulting women with any kind of language. The Donald’s language was predatory and specific. That is how sexual predators talk. They objectify, turning the person they desire into something non-human, a caricature they can dismiss, the easier to dispossess the victim of her humanity in order to feel strong.

Pussy Riot reclaims the word “pussy,” and the pussy itself, as a powerful maternal force: the mythopoetic “Tooth Mother” combined with “Earth Mother,” Gaia. But as important as the Pussy, is the Riot: imagine a corps of women equipped not just with stamina but with the intellectual acumen to tromp on the ineffectual, prepared to respond to physical threats or vapid arguments, to do battle with those oblivious to the reality that most women and many men are repulsed by so-called locker-room talk.

When Hillary is President, I hope she will convene a dinner of women, the national equivalents of Pussy Riot. These Rioters will not only break the ceiling, but blow the roof off, and from there will reclaim the language so long used against them.

Tessa Hadley, C. E. Morgan, and Jerry Pinto on the Future of Libraries

What words for the disturbing nightmare-reality that Srikanth Reddy's new poem conjures? The Egyptian Book of the Dead can be rehearsed...
© LitHub
Back to top