"Hemingway came from dykes and to dykes he shall return."

I love Ernest Hemingway very much, which is unfashionable of me. Hemingway does not pass in my queer, feminist circles. Even in undergrad, we treated Hemingway fans with suspicion, because Hemingway is shorthand for clean, muscular prose: fighting, fishing, and casual misogyny. Hemingway has been dubbed the ultimate masculine writer for so long that it feels like a self-evident truth.

But Hemingway’s writing itself does not fit any straightforwardly heterosexual, masculine mold, and the general perception of him as such is one of the lit world’s most distorted misrepresentations. Hemingway is at once kinder and more lost than we give him credit for. He has an excellent sense of humor. He is often very emotional. His portrayal of women is certainly misogynistic, but it is also complicated, mixed with longing and terror; very often, his women are the most nuanced characters on the page. He was guided closely in his early career by Gertrude Stein, who championed and instructed him, whom he loved and hated and from whom he never quite escaped. And most tellingly, Hemingway’s writing is distinctly queer, so much so that it’s odd that he is not—along with compatriots like Herman Melville and Emily Dickinson—read as such.

Hemingway’s biography as a womanizer has blocked many opportunities for queer readings of his work, but I’m not sure that a string of failed marriages precludes queerness. In fact, the queerness in Hemingway’s work is tied to retreat and fear: he comes close and then hurriedly backs away, he excuses himself, he feeds homophobia like a live wire through the text and asks you to ignore everything around it. Queer literature is no stranger to strategies of retreat and disguise; figures like Melville and Carson McCullers wrote around queerness in their work in a way that makes the absence conspicuous for readers who know what to look for. Shying away from explicit queer content and instead illuminating the paths that fear or convention force you to take was—and is—sometimes the only option available for writers unwilling or unable to acknowledge the queer themes in their work.

That Hemingway is homophobic is undeniable—in A Moveable Feast he talks about homosexuality being “why you carried a knife and would use it”—but his writing complicates it. Queer desire and fear of that queer desire lie intertwined on Hemingway’s pages: writing about F. Scott Fitzgerald’s “delicate long-lipped Irish mouth that, on a girl, would have been the mouth of a beauty”, he adds, “The mouth worried you until you knew him and then it worried you more.”

“Hemingway’s biography as a womanizer has blocked many opportunities for queer readings of his work, but I’m not sure that a string of failed marriages precludes queerness.”

Most importantly, Hemingway’s queerness is tied irrevocably to women. His understanding and representation of queerness was often formulated through women. His writing uses stand-ins, plays with gender, and ties his physical and romantic attraction to men back to women. This doesn’t dilute the queerness of his work; rather, by centering women, it makes Hemingway what I want to call dykey. He queers not only his protagonists, but the women they attract.

Hemingway’s masculine appeal derives in part from his keen eye for the dynamics of male relationships, something you’d expect from a writer who named a short story collection Men Without Women. But what the relentlessly heterosexual readings of his work don’t take into account is the sheer romantic and sexual tension apparent in his portrayal of other men—like the protagonist’s “good-looking” roommate in A Farewell To Arms, Lieutenant Rinaldi, whose relationship offers a playful, tender reprieve in the midst of World War I. From the moment of Rinaldi’s first appearance, when he wakes up to put “his arm around my neck and [kiss] me” (“Oughf,” says Henry sweetly), the two men move close, tease, and jerk away, or else the curtains close, leaving them in imagined quiet domesticity. Even when discussing Catherine Barkley, Henry’s love interest, the conversation is easily flirtatious. Rinaldi sends his friend to sleep with a calm, “Goodnight, little puppy.”

Little puppy is hardly emblematic of the stoic heterosexual bonding we’re taught to expect from Hemingway. But his novels are packed with these charged relationships between men, whether it’s Rinaldi’s kiss hello or Bill Gorton and Jake Barnes in The Sun Also Rises cozying up together in a French fishing village to smoke “and read in bed to keep warm.” When Hemingway turns against men—and he frequently does—he is malicious in undercutting them, as in Fitzgerald’s depiction as a weak hypochondriac in A Moveable Feast. But his treatment of Fitzgerald is the kind of bitterness that comes from a great feeling, spent. “He was cynical and funny and very jolly and charming and endearing,” Hemingway tells us, adding quietly, “even if you were careful about anyone become endearing.”

Hemingway is very careful about anyone endearing themselves to him, and especially any man—which is why we so often find him using diversionary, deflecting tactics, like light bouncing off glass, and why the presence of women in Hemingway’s work is so important. Despite what the phrase Men Without Women would have you believe, these romantic relationships between men are rarely uninterrupted. Rinaldi talks about Catherine Barkley. Bill Gorton speculates about Lady Brett Ashley, the romantic interest in The Sun Also Rises. But the women in Hemingway’s work are not just alibis for his protagonists or lucky “saved by the bell!” intrusions. In fact, they queer his texts further.

A crowd of young men, some in jerseys and some in their shirt-sleeves, got out. I could see their hands and newly washed, wavy hair in the light from the door. The policeman standing by the door looked at me and smiled. They came in. As they went in, under the light I saw white hands, wavy hair, white faces, grimacing, gesturing, talking. With them was Brett. She looked very lovely and she was very much with them.

It’s like a card trick, the kind you have to watch in slow motion to understand. Watch the way sexuality is deftly taken from the young men in jerseys and shirt-sleeves, the swift zeroing in from their “hands and newly washed, wavy hair,” and passed onto Brett, still wearing her ex-husband’s first name, “very much with them.”

“The women in Hemingway’s work are not just alibis for his protagonists or lucky “saved by the bell!” intrusions. In fact, they queer his texts further.”

Brett is short-haired, androgynous, startlingly direct, and chasing after love affairs. She is one of Hemingway’s most brilliant female characters, always hurtling herself into ruin and climbing back out again. She is also almost comically Freudian: a woman who looks like a man, a woman with whom the protagonist is desperately in love but cannot touch. Jake Barnes, the novel’s narrator, is impotent from a war injury, and he and Brett spend the novel in quiet, tragic understanding that their love is therefore undercut forever.

“Do you think so?” Her eyes looked flat again.

“I don’t mean fun that way. In a way it’s an enjoyable feeling.”

Desire in The Sun Also Rises is impossible. Desire is unhealthy or even unnatural—Brett and Jake’s bodies cannot live up to it. Many critics have linked Jake’s impotence to the decimation of World War I, which is certainly a factor; behind the enforced gaiety of the novel, the characters are reeling and damaged from the war. In a discarded foreword, Hemingway explained that writing about his generation was not a matter of wondering “what kind of mothers flappers make or where is bobbed hair leading us. For whatever is going to happen to this generation of which I am a part has already happened.” But Jake’s impotence also lends itself to a parallel with banned sexuality, sexuality that may be longed for but never resolved. In this way, it is also a clear stand-in for queer romance, both viscerally physical and psychological.

The characters never mention Jake’s affliction aloud, only talking around Jake’s “war injury”, and between Brett and Jake it is a silent, understood gulf. If it’s easy to interpret Jake’s impotence as a metaphor for societal damage, it’s equally easy to interpret it as one of societal prejudice. Jake and Brett want to have sex and be together: they’re just not allowed. Even the very unspokenness of the romance, rarely mentioned by Brett and Jake to anyone else, lends itself towards queer readings of closeted love. Lady Brett, wounded herself, is as implicated in this queer romance as Jake is.

In the posthumously-published Garden of Eden, queer romance is at once more explicit and, like Fitzgerald’s mouth, more worrying. The novel is about newly-married couple David and Catherine Bourne on their extended European honeymoon, spending their days eating, drinking, swimming, and having sex.” And then Catherine comes up with a “wonderful dangerous surprise”: she cuts her hair very short.

He lay there and felt something and then her hand holding him and searching lower and he helped with his hands and then lay back in the dark and did not think at all and only felt the weight and the strangeness inside and she said, “Now you can’t tell who is who can you?”

“You are changing,” she said. “Oh you are. You are. Yes you are and you’re my girl Catherine. Will you change and be my girl and let me take you?”

Sex in fiction is not the same as sex in real life: when Catherine and David play with gender, they are not just a straight couple wandering into faintly kinky waters. They are transforming, hiding shifting bodies, loves and queerness behind Hemingway’s stark sentences. The scene is, unmistakably, a fantasy of gay sex, and a microcosm of Hemingway’s anxiety, tension, and fascination with the muddy waters of queer sexuality. He is drawn towards queerness and repelled in the same moment; he can accept a romantic male friendship, but squirms at that last step toward transgression.

In his inability to create a straightforward a gay romance, Hemingway instead allows his characters to become genderqueer, genderfluid, to play with roles and switch sides. This centerpiece scene, of Catherine as the architect and executor, threads queerness through her character as much as it does David’s. She is as queer in this scene as when, later in the novel, she sleeps with Marita, another female character.

This is the secret that lies under Hemingway’s queerness, a secret about Gertrude Stein and Brett Ashley and Catherine Bourne. We don’t have to discard Hemingway’s portrayal of women in order to embrace his queerness; they are integral to it. And Hemingway is not only interested in women as stand-ins or Freudian mirror figures or excuses, but as queer women in their own right, dangerous and worrying. It is this that makes Hemingway’s work not just queer but dykey. Queer women rule his pages, and Hemingway is enthralled by them.

It is my hope that one day the many decades of Hemingway’s fame as the great American male writer will be a blip, a minor and annoying interruption between his quiet ease at Gertrude Stein’s table and his happily-ever-after on the shelves of great queer literature. The disquiet and danger that haunts Hemingway’s writing doesn’t need to exclude him from queerness; in fact, it forms a particularly unnerving connection. Hemingway came from dykes and to dykes he shall return.

Mikaella Clements is an Australian writer currently based in Berlin. She has been published in BuzzFeed, The Lifted Brow, Catapult, and Overland Literary Journal, among others. You can find her on twitter @mikclements. 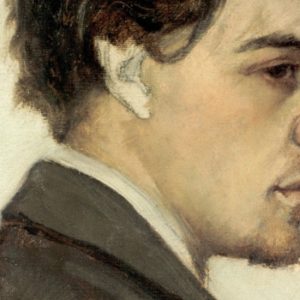 Not long ago there was an exhibition of Russian portraits in London, and on the way out I bought Chekhov’s stern bespectacled...
© LitHub
Back to top