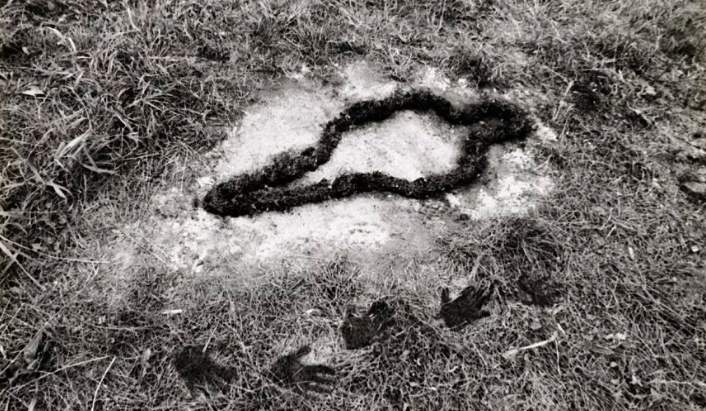 “The President of Coca-Cola”

Flash Fiction by Achy Obejas, in Memory of Ana Mendieta

Ana Mendieta was a much-revered Cuban American performance and multi-media artist best known for her “earth-body” artwork. She died September 8, 1985, from a fall from her 34th floor Greenwich Village apartment, where she lived with her husband, minimalist sculptor Carl Andre. In 1988, he was tried and acquitted of murder.

The President of Coca-Cola

Ana Mendieta is the president of Coca-Cola and dresses in yellow, a mother of millions, an international pop star rolling by the riverside covered in spit and feathers. Ana Mendieta is the U.S. senator from Florida, the governor of New Hampshire, four feet ten inches seared into wood, traced with blood, formed from mud and grass and gunpowder. She leans on the bar counter, a Mentirita in her hand. Ana Mendieta is the grand Duchess of Luxembourg, a prestigious professor of international law at the Geneva School of Diplomacy and International Relations. Ana Mendieta is a shadow play of light in the cornfields of Iowa, a mound of earth outside Havana, cave drawings. She is the mayor of Wichita, the tender-hearted sister of the late dictator, a glamorous fashion model, welfare recipient, emergency case in the emergency room, a soldier, dentist and historian, the host of a daily talk show on Telemundo who gulps down a milky Black Cow every day before talking calls. Ana Mendieta is the intellectual author of Miami’s resurgence, the evil genius behind the bombing of a plane that killed every member of the national fencing team, and the man who ripped out his lover’s guts when she moaned the name of another. Ana Mendieta is a power hitter, MVP and six-time all-star celebrating at a gay B&B on Duval Street with a Chocolate Slam and a tray of cocaine. Ana Mendieta is the president of Coca-Cola and a double-agent. She invented the sitcom, the telephone, birthed Amazon, came over with 14,000 kids and got deported with 2,021 others, mostly murderers. Ana Mendieta fears that if she weren’t an artist, she’d be devoted to a life of crime. Ana Mendieta is subject and object. She is overwhelmed by feelings of being cast out of the womb, from the island, from exile. Ana Mendieta is the target of racism and a particularly fierce misogyny. She has a wicked cackle, a cruel flutter of hands. She swallows a Dark’n’Dirty, an Eye of the Storm, a Fucked Up Float. Ana Mendieta is the goddamned president of Kola Coca and she’s both gleeful and embarrassed by the millions she earns but is also keen on what all that money can do. She’s on the outside looking in, and so in with the in crowd. Ana Mendieta is alone. She pushes and presses her face against the glass until there’s a tiny hairline fracture that snakes back and forth and back and forth and the glass separates so she can pop each piece with her fingers. Ana Mendieta is the youngest of all, the last to open her eyes when Earth was created. She is the feminine ideal, the masculine ideal, the non-binary ideal and inspires lust and fruitfulness. She loves hand-held fans and mirrors and is constantly dipping her fingers into honey jars. Ana Mendieta loses interest quickly. She’s a peacock, a sack of bones, a woman dozing on the roof of a deli thirty-three stories down.

Achy Obejas is the author of the story collection, The Tower of the Antilles (Akashic Books) which was nominated for a 2018 PEN/Faulkner award. Her most recent translation is Rita Indiana's eco-sci-fi novel, Tentacle (And Other Stories). Her poetry was published in This is What Happened in Our Other Life (A Midsummer Night). For more, visit www.achyobejas.com.
Share: 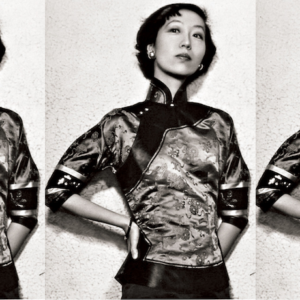 Lit Hub Weekly: September 4 - 7, 2018 “When you put a snake and a rat and a falcon and a rabbit and a shark and a seal in a zoo without walls, things start...
© LitHub
Back to top
Loading Comments...