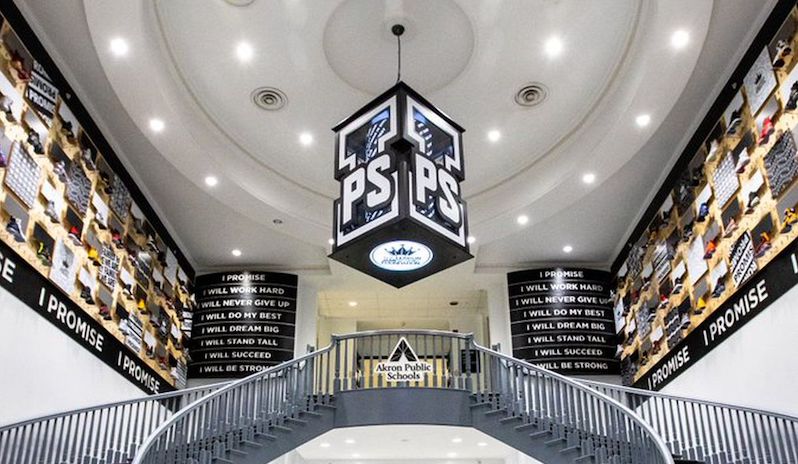 The Power of the Collective: How Lebron James Got Into Education Reform

When it comes to reforming our education system so that it adequately meets the needs of children who have historically underachieved, nothing is more significant than the power of the collective. That power can take a small effort and magnify it to such a degree that it begins to take on a life and an energy of its own. Picture in your mind a spider. As I write this, spring is unfolding outside my window, with its longer days and brilliant sunrises. In the part of the country where I live, we see spiders quite often this time of year, spinning their webs, catching their prey, laying their eggs. Imagine walking along outside and inadvertently walking into the thread of a spiderweb. You can’t see it, but there is no doubt that you have encountered it. Normally, we just wipe it away and don’t give it much more thought, but let’s dwell here a moment. Imagine the same scenario, but add a hundred spiderwebs, a thousand, a million. Our reaction would be quite different. In fact, I would argue that even the strongest person reading this would be stopped in her tracks.

What I have just described is the core of an old Ethiopian proverb: “When spiderwebs unite, they can tie up a lion.” Think about it. One of the fiercest animals alive, commonly known as the King of the Jungle, can be completely immobilized by something as fragile and as seemingly innocuous as a spiderweb. But not just any spiderweb. Spiderwebs united.

This is the principle that we often fail to activate when it comes to educating the youth of our nation. Somehow, we keep missing opportunities to form collectives, to collaborate in ways that can support children who are facing challenging situations. We recognize that solutions exist, but we miss the mark when we fall under the spell of the idea that we can do it alone. Problems as long-standing and pervasive as the ones we see in America’s schools need to be addressed with the most innovative ideas, inexhaustible energy, and boundless hope. It is when we stay trapped in the same cycles with the same programs expecting different results that we find ourselves repeating history.

We keep missing opportunities to form collectives, to collaborate in ways that can support children who are facing challenging situations.

Fortunately, when we survey this country’s educational landscape, we find many examples of collectives and collaborations that have worked. Take, for instance, the I Promise School, which was started in 2018 by the LeBron James Family Foundation. In this instance you have a celebrity, arguably the best basketball player in the history of the game, who simply recognized the need to give back to the community where he grew up: Akron, Ohio. He considered his own story, the 83 days he missed from school during his fourth grade year, the disappointment and defeat in the eyes of his teachers when he was growing up, and decided that he would use his resources to create something beautiful for kids who find themselves in similar situations. The foundation started with community work, offering full college scholarships to students who met certain criteria, but quickly realized that it needed to do more if it wanted to make a significant impact. This is where the opportunity to combine threads of the Spiderweb developed.

James reached out to his hometown’s school district and was granted use of an old building, which he refurbished and reopened within a matter of weeks. The I Promise School, which opened in 2018, operates as a public school under the auspices of the district. However, in addition to the $2 million the district contributes toward the school’s budget, James kicks in an additional $600,000 to fund extra teaching positions, after school activities, and tutors. The increased funding allows the school to keep the student-to-teacher ratio lower than other schools. There’s also a laserlike focus on the parents and caregivers who send their students to I Promise. They are invited to come to the building during the school day to work on their GED or pick up food from the school’s pantry.

Results are still preliminary, but the reading and math scores of the third and fourth graders enrolled at the school showed a significant increase, according to a 2019 New York Times article about the school. Since kids were targeted for participation because their test scores were at the absolute bottom of the scale, this step forward is cause for celebration. It’s a sign that relationships are being built, confidence is being gained, and the community has bought in to the possibility of change that this experiment can birth.

This is what we need more of in this nation. We need smart, dedicated, strategic people with access to resources to inject innovation into schools that could do a better job of educating the most vulnerable citizens in our society. Egos have to be swept aside, and room has to be made for the best ideas. LeBron James came to the negotiating table with a famous name, a track record in the community, and the money to put ideas about improving education into practice. These factors paved the way for district officials to trust his foundation enough to enter into a partnership that is now benefiting the entire community.

Other celebrities, seeing the obstacles faced by children living in low-income communities, have used their fame as leverage to create equally compelling platforms for change. Let me be clear, I am not advocating that we swing wide the doors of the education system and invite every person with an idea to sit at the table and make decisions for millions of students. People who have no experience working with children, or who have spent little time attempting to understand the art and science of teaching, are the least qualified to lead schools. Some have argued that running a school system is no different than running a successful corporation. Set goals, work toward them, evaluate employees, measure progress.

Parents are invited to come to the building during the school day to work on their GED or pick up food from the school’s pantry.

What gets left behind in this capitalist approach to education is the importance of building strong relationships, celebrating the strengths of children who have been historically disadvantaged, and communicating to families that they are valued. Many of the powerful elements of the Negro schools that existed before integration fall by the wayside when we think of educating our kids as just another business. When political and economic forces become more important than inspiration and creativity, we have lost our way.

The kind of collaboration I’m suggesting leaves the important decisions about progress and how to make things better for kids who struggle in the hands of educators who have a sense of what works. The partnership between Akron’s school district and the LeBron James Family Foundation is a good example of how a citizen can call attention to a problem and work with the system to create a new solution. 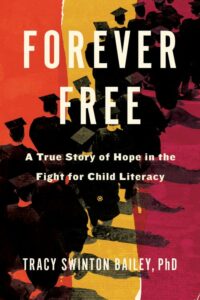 Excerpted from Forever Free: A True Story of Hope in the Fight for Child Literacy by Tracy Swinton Bailey. Soon to be published by Other Press.

Tracy Swinton Bailey earned a Ph.D. in Education with a specialization in Language and Literacy at the University of South Carolina in 2013. She began her career as a high school English instructor, and went on to found Freedom Readers, an after-school and summer literacy program that was designed and implemented to support families in low-income areas and assist children in achieving their academic goals in reading. She is married to award-winning writer, Issac J. Bailey, and is the mother of two children.

The Cave Dwellers by Christina McDowell, Read by Madeleine Maby 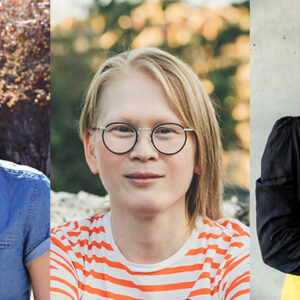 In a partnership with Kimpton Hotels & Restaurants Lit Hub is curating a book club and lending program for travelers...
© LitHub
Back to top
Loading Comments...