The Poetic Pleasures and Pains We Can Only Express in Dutch

Sadiqa de Meijer on How Landscapes Change as Our Language Does

My mother’s vowels were as clear as drinking water. She expected ours to sound the same. She was a teacher, and the child of two teachers; before them, there was a madwoman, a sea captain, a divorcée, a drunk. And then blacksmiths, generations of them, clanging out horseshoes on inherited anvils.

“The finest Dutch,” she used to say, “is spoken in Haarlem.” That wasn’t where we lived.

I thought of the song about the bells.

The clocks of Haarlem, they sound sweet of tone.

The Dutch words for sound (the verb) and vowel are very close: klinken and klinker. The bricks of the old streets are also called klinkers, which has to do with the archaic term inklinken, to shrink down or dry or compress a material.

When I was in first grade, our class visited an abandoned brick factory on the Rijn.

We knew the ruined structure as the backdrop to a quarry. People swam there in the summers. Our cupped hands, plunged in the shallows, would emerge crowded with wriggling tadpoles. Dikkopjes, little fat heads.

The building that had manufactured bricks was also made of bricks: one tall round chimney, a row of arched ovens with crumbling walls, and a roof overgrown with dandelions. Our guide had worked at the factory. The river clay, he explained, had been dug from where the quarry now was, then purified and shaped and baked. He told us the quality of bricks can be confirmed by listening for their lucid, musical pitch when banged together.

We were from schoolteachers, and we would sound like it.

Not from market vendors, who spoke the Dutch of our region: grammatically pragmatic, lower in pitch, with languidly melodic tones. That was called flat. It had to do, a long time ago, with the elevations of the land.

“Sky” cannot fill your lungs or flow into your bloodstream. Only “lucht” can do that.

And also not from the Queen, with her architectural hats, her bruised and reticent inflections. That was talking with a hot potato in your mouth.

What a tough and lovely feeling it was to slip into the vernacular on the streets. To skin a knee and pronounce I’m bleeding as I bloom.

Mother tongue. In her book on the subject, Yasemin Yildiz warns us against the term’s implied assumption that a first language carries an “affective and corporeal intimacy.”

Oh, but it is indeed my mother tongue.

My pulse music, my bone resonator, my umbilical ligature.

“The milk language,” says Ghita El Khayat, who published Le Petit Prince in its first dialectal Arabic translation, “because such a story is a gift from mother to child.”

My language of the lullaby and nursery rhyme.

My language of the effortless diminutive, the suffix je, which in the vocabulary of early childhood, when doorways and hedges and grown-ups towered over us, seemed to permeate our portion of the world:

And when I stood on the low plaster toadstool that served as a trail marker in the woods near Ede, still too small to get there without someone lifting me or to leap off without clutching their hand, it was the language of first namings: boom, grond, lucht. Are there any spoken sounds as elemental? Not to my ear, not to the anvil bone of my inner ear.

Boom, grond, and lucht exist where I live now as well. Trees, ground, and sky.

The ground is not that old ground; it is another continent.

The sky is continuous with the old one, but it feels different. It isn’t as vast and fresh, or so haunted by hurried clouds. Here the people do not call it lucht, and so it isn’t also air, which means it is impossible to breathe this sky.

Sky cannot fill your lungs or flow into your bloodstream.

Only lucht can do that.

Dutch is not the name of my language.

Dutch, that crushed stone, that steaming pressure-cooker valve—there is no resonance in that disintegrating syllable, Dutch, Dutch, Dutch; its closest correlate is Duits, which means “German,” which is altogether different, with its cragginess and hushings and reverently capitalized nouns.

The language I speak is Nederlands, NAY-der-lahnts, in three descending pitches: of the low land; low or humble or meek, as in the Sermon on the Mount, for they shall inherit the earth.

The utterances of my people, who used to dwell on hillocks, lone islands in the flood plains of the sea. And they had never heard of Christ.

When the tide was high, their houses looked like anchored ships.

In storms, the rain and whitecaps lashed their walls. Was it any wonder that the words they made would sound like phlegm? Their grooved hands gathered frigid peat and dried it in the wind to make the slabs that fuelled fires. Rainwater was stored, for drinking, in a hole outside the door.

Dutch is not the name of my language. Dutch, that crushed stone, that steaming pressure-cooker valve—there is no resonance in that disintegrating syllable. The language I speak is Nederlands, NAY-der-lahnts, in three descending pitches: of the low land; low or humble or meek, as in the Sermon on the Mount, for they shall inherit the earth.

That is my language, of wind moving over earthen homes in shallow seas, of a vessel dipped in a rainwater pit, of a cough from a straw bed.

Grammar of nettles and elderberry and the blue-grey shells of blackbird eggs. Of windbreaks of knotted willows. Of rivers that flood the fields and freeze. Irregular verb of the wooden skates, the scrape of blades that herringbone the ice, the sensation of flying toward the flat horizon.

Consonants are land; vowels are water.

My speech of the sluiced and siphoned vowels. Of the proper vowels in straight trenches. Of the stubborn vowels that will not stop seeping through the clay.

Crowded syntax of bicycles, released with the green light, a wheeling cluster that crests like a wave over an old arched bridge. The chirp of the signal for pedestrians with visual impairments, the swoosh of plastic rain-pant legs, the lingering, quietly stale flavor of coffee, and the salty aftertaste of bami goreng.

Disappearing dialects of fine terroir; of cities, twenty minutes apart, with distinct municipal accents. The verbal tunes of Drenthe, of Limburg, of Zwolle and Rotterdam and Urk.

My vocabulary of images from a train at dusk; a reel of domestic scenes in the apartments near the tracks. A newspaper held wide by an unseen reader, an old man without a shirt, two children looking out. The clatter of the elevated rails.

Then indigo countryside and one rural house, a solitary square of light.

That script of intimate and irretrievable moments in rooms, of living Polaroids, embedded in an immense and deepening darkness.

I speak the language of the train, and the apartments, and that house.

The syllables of apartment stairwells that smell of ammonia, of a thin lawn where a woman in curlers holds the leash of her tiny dog, of a snack bar where the air is thick with deep-fryer fumes.

The diction of the lone house, with its straw roof and tile floors, the neighboring medieval castle with a moat. Of waking to the calls of mourning doves and distant cows, taking warm eggs from the dim chicken coop, inhaling a forest of bark and acorns and mushrooms, sensing the discreet and sniffling progress of a hedgehog.

The sentence of the narrow road, bricks laid across from edge to edge, its rounded surface undulant. Bright moss growing in the seams. Pebbles and beechnuts pressed into the mortar dirt. The cadence of car tires, creaking and peaceful, a sound that swells until the bend, then coarsens and resumes.

My private Nederlands. My language of confidential sections of my journal. Of the inner territory between world and word.

One afternoon, well into my Canadian life, I was riding my bike through a downtown intersection. On the opposite corner, a cluster of pedestrians waited to cross. Something large was on the road in front of them, against the gutter, blocking my path. A garbage bag. I swerved left to avoid it, and a young man in the small crowd yelled, “Pas op!” I looked over my left shoulder and saw that I’d moved in front of a speeding pickup truck, and when I swung back to the edge of the street, I felt the airstream as its side-view mirror passed my head.

I was already a few blocks away, feeling foolish, lucky, and shaken, when I realized I’d been alerted in Dutch. Maybe by a tourist, or an exchange student, who in a moment of alarm had spewed the first words that came to mind. For which I happened to be wired, as it were, from ears to brain to palms gripping the ribbed handlebars.

Mother tongue, is this how you come to your estranged ones, in wayward outbursts, sparing their lives?

Mother tongue, is this when you’ll surface, under cover of night, in the mind’s somnolent dark?

Not long ago, a child named Nancy was interned at the Kamloops Indian Residential School. She was forgetting parts of her language. Not through the slow attrition of immigration but from the purposeful brutality of her teachers, and of their supervisors, and of their supervisors’ supervisors, in a funnel of power under which a young girl, stolen from her parents, was a lonesome target. She recalls lying in bed one evening:

Mother tongue, is this when you’ll surface, under cover of night, in the mind’s somnolent dark?

I once worked on a hospital ward where an elderly woman lay in a catatonic state. She stayed in bed, refused to drink, eat, or speak, and kept her eyes fixed on the ceiling. Because there was nothing measurably wrong, the medical doctors had been confounded and transferred her to psychiatry. There was no known family. The nurses turned her stiff body in the bed. Sometimes they managed to feed her a spoonful of water or soup.

The woman had been brought to the hospital by her landlord, who described her as determined and self-reliant, a widowed Dutch immigrant. He said she didn’t answer her door for a day or two, and he found her sitting mute and immobile in a chair. I could picture that chair. Upholstered in dim florals, brown crocheted covers over the armrests. The carpet still scrolled with a vacuum’s linear wake. The tick of a heavy, wooden clock.

I offered to speak Dutch to her. The staff agreed, and they gathered around her bed to observe. I stood beside the IV pole with its translucent bag of fluid and the nightstand where a small pink sponge on a stick sat in a Styrofoam cup of water. The woman was emaciated, her body dry as kindling under the sheets. I had the sense that a formidable will was at work. Perhaps she had made up her mind to die. I asked, in Dutch, Mrs. P, can we do anything for you?

The effect was abrupt. She snapped her head sideways and searched out my eyes in the group. Her gaze was bewildered, imploring, and furious. Holding it made me tremble. Then, only once, she shook her head conclusively. Turning away, she resumed her petrified state.

Mother tongue, will you come for your uprooted ones, when our souring, labored breaths are numbered? Will you be there to ferry us home?

Sadiqa de Meijer was born in the Netherlands and moved to Canada as a child. Her writing has appeared in the Malahat Review, the Walrus, and Poetry magazine. Her collection of essays on language transition will be published with Palimpsest Press in 2020.

On Being a Woman Who Loves Math 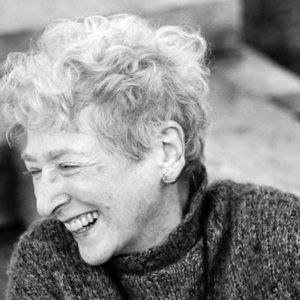 Lore Segal was walking in her Upper West Side neighborhood when she realized a sentence she’d written fifty years prior...
© LitHub
Back to top