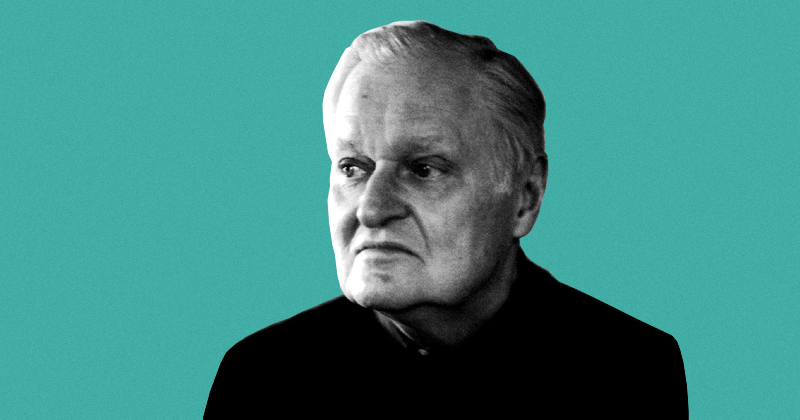 Looking Back at his Final Poem, One Year After his Death

When I learned that John Ashbery had died, I was on my way, with my then-fiancée (now-wife), to a coffee shop to write. But when we got our drinks and settled at our table, instead of writing I opened Twitter and scrolled, watching the news begin to spread. I realized that there was someone I should tell. Before opening my draft to get to work, I emailed a former teacher with whom I’d recently been in touch. His latest email to me, which described his summer reading, ended with a note that, “for [my] pleasure,” he’d attached a PDF with the title poems from Ashbery’s two most recent collections, Breezeway and Commotion of the Birds. I’m prone to over-long emails, but that day, I was brief. “Thanks for this note and for the poems,” I wrote. “I’ll respond more fully soon, but I wanted to share, in case you had not heard, that John Ashbery has passed away.” I added a link. Ten minutes later, my teacher wrote back. He hadn’t heard until I wrote him.

There was a sad symmetry in my telling my teacher that Ashbery had died, because he’s the one who’d told me that Ashbery existed. In the summer before my senior year of college, on his recommendation, I’d purchased the first volume of the Library of America edition of Ashbery’s collected poems. I found them challenging. The language called attention to itself. The connections from one line to the next were obscure, the overall meaning elusive. But something in the strangeness of the language, in the subtle shape detectable in that seeming senselessness, held me.

I kept reading. With my teacher as an advisor, I wrote a senior thesis in which I tried to find a way of reading Ashbery’s long, chimerical, uncontainable poem “The Skaters.” I came to believe that entering Ashbery’s often incomprehensible work requires us to set the goal of comprehension to the side and to linger patiently in the poems’ pleasures. In these, I think we can find a way into something warm—something vital—pulsing beneath the mysterious verse, a force that Ashbery hints at in “Soonest Mended”:

…We are all talkers
It is true, but underneath the talk lies
The moving and not wanting to be moved, the loose
Meaning, untidy and simple like a threshing floor.

Yet difficulty, rather than pleasure, is the quality most commonly associated with Ashbery’s literary legacy. Richard Koestelanetz opened his 1976 New York Times profile of the poet, which bears the headline “How to be a difficult poet,” with this observation: “John Ashbery’s poetry is extremely difficult, if not often impenetrable; it does not ‘work’ or ‘mean’ like traditional verse, or even most contemporary poetry.” Ashbery was well aware of this reputation. In the introduction to a series of lectures collected in the book Other Traditions he reflects, a bit self-deprecatingly, on why he has been chosen for the lectureship. He says he has “a few theories” on the matter:

The first one that came to mind was that, since I am known as a writer of hermetic poetry, in the course of lecturing I might “spill the beans,” so to speak: that is, I might inadvertently or not let slip the key to my poetry, resolving this vexed question once and for all. There seems to be a feeling in the academic world that there’s something interesting about my poetry, though little agreement as to its ultimate worth and considerable confusion about what, if anything, it means.

Ashbery goes on to insist that he couldn’t “spill the beans” about his poetry even if he wanted to. He frames the reason why this is so in two ways. First, as an impossibility arising from the work itself and his relationship to it as author: “I feel,” he says, “that my poetry is the explanation. The explanation of what? Of my thought, whatever that is. As I see it, my thought is both poetry and the attempt to explain that poetry; the two cannot be disentangled.” Next, he describes this as a personal deficiency. “On occasions when I have tried to discuss the meanings of my poems,” he says, “I have found that I was inventing plausible-sounding ones which I knew to be untrue.”

As an illustration of these claims, he offers this anecdote:

Unfortunately, I’m not very good at “explaining” my work. I once tried to do this in a question-and-answer period with some students of my friend Richard Howard, after which he told me: “They wanted the key to your poetry, but you presented them with a new set of locks.”

Here, as in Ashbery’s description of his reputation as “a writer of hermetic poetry,” his work’s difficulty is framed as impenetrability, as inaccessibility: it withholds its meaning from the reader. But the fact that the work is difficult does not mean that is inaccessible—not if we try to see open doors where Howard’s students saw keyholes. Rather than suspect Ashbery of deliberately concealing his poems’ true meaning, we might begin from the premise that Ashbery left doors open everywhere in the particular modes of strangeness he chose.

Take, for instance, the final door Ashbery left for us: his poem “Climate Correction,” written a little more than a week before he died and published in Harper’s last month. It’s a short and relatively simple poem—four stanzas of three lines each. Its language is colloquial. Its oddness comes from its structure and its subtle, sustained deforming of ordinary English. It opens like this:

So what if there was an attempt to widen
the gap. Reel in the scenery.
It’s unlike us to reel in the difference.

The poem’s first words—“So what”—eagerly invite the reader in. They’re everyday words that clearly imply a situation and an attitude toward it (indignance, or indifference). But by the second line, the reader might feel rebuffed. What is “the gap”? What is the “attempt to widen” it? But if we put aside these questions—as well as the expectation that the poem will ever answer them—we can pause to enjoy the way the line break in “widen / the gap” performs the gap’s widening within the phrase. This trick helps to locate the reader in the language itself, rather than in its referents. We’re then in a better position to appreciate the unusual use of the phrase “reel in,” employed twice in the next two lines. The first use is unorthodox but not impossible to make sense of; it could mean something like, “Take in the scenery.” The second is harder. It might make us think of the more common phrase “revel in the difference” and suspect both uses of a missing consonant. Now we’re caught in the language, circuiting within the poem.

We got the room
in other hands, to exit like a merino ghost.
What was I telling you about?

Walks in the reeds. Be
contumely about it.
You need a chaser.

If there’s any narrative or thematic continuity between the first verse and the second, it’s not immediately clear, except that the “us” of the first verse’s third line could be the “we” of the second verse’s first line. (This could also be the same as the “I” and “you” of the second verse, or else the “you” could be a separate addressee.) Like the poem’s first lines, “We got the room” is directly inviting—colloquial and knowing, almost conspiratorial. You know what’s going on, it suggests with a nudge, just as we’re beginning to really feel unmoored. The phrase “merino ghost” is classic Ashbery: easy on the ear, precisely evocative, yet puzzlingly contradictory. The notion of a woolen ghost—or the ghost of wool?—strikes me as equally sensible and nonsensical. By now the reader is feeling a little lost, even if it’s enjoyably so. The next line re-welcomes us by making space for that very feeling: “What was I telling you about?”—as if the speaker, too, is not sure why these phrases are so arranged.

“You know what’s going on, [the poem] suggests with a nudge, just as we’re beginning to really feel unmoored.”

The next line—“Walks in the reeds”—is both an answer to the question that precedes it and a phrase that revels lightly in its own lyricism: the pleasure of the four simple syllables in which the first and forth obliquely mirror one another, the repetition of all those “W” sounds in the preceding lines. My favorite moment in the poem comes next: “Be / contumely about it.” This has the syntax of sense but not the semantics; “contumely,” the reader will either know or learn when they look it up, isn’t an adverb, but a noun, meaning, as Merriam-Webster has it, “harsh language or treatment arising from haughtiness and contempt,” or “an instance of such language or treatment.” And let’s not underestimate its visual and auditory cartoonishness. This is one of Ashbery’s ways of ushering us into a realm where sense does not reign.

In other words, persist, but rather
a dense shadow fanned out.
Not exactly evil, but you get the point.

The first phrase—“In other words”—is a subtle hinge. It carries the security of structure; it’s also an announcement that the reader might expect, in what follows, a clarifying restatement. The word “persist” gleams like a beacon, set off on its own by commas and seeming to address the reader directly, even instructively. We do seem on the verge of clarity, though the reader knows better by now than to expect it. “[A] dense shadow fanned out” shatters the expectation that the phrase that follows “but rather” will parallel “persist.” But there’s a new linguistic pleasure in the self-referential density of the stacked consonants of “dense shadow” giving way to the openness of “out.” We might wonder, does this have something to do with the title’s apparent reference to global warming?

Of course, we are welcome to wonder and won’t be told. The poem’s final clause—“but you get the point”—functions as a multivalent wink. It repeats the chatty knowingness of “So what” and “We got the room,” but with a twist. In one sense, it’s a joke: there is no simple “point” to “get”—not in this poem, and not in Ashbery’s entire corpus—yet this is, itself, a point to get. In another sense, it’s a moment of self-deprecation—a waving away of the poem’s (and Ashbery’s) mysteries as mere antics.

In still another, it’s permission from Ashbery, on the poem’s—and now death’s—other side. I can imagine him beckoning us near, smiling conspiratorially. But you get the point; you see what I’m after. Carry on; do not fear. Enter here. The line suggests—as Ashbery did, indirectly, in his insistence on his inability to explain his own poems—that his oeuvre is not a collection of puzzles to be solved. Rather, it’s a body of work, as playful as it is perplexing, in which the difficult elements exist not to impede our access to something more straightforwardly expressible, but to welcome us into what cannot be simply said.

What Your New Roommate's Favorite Book Says About Them

From an Army Camp to the Champs-Élysées: Bill Cunningham's Paris 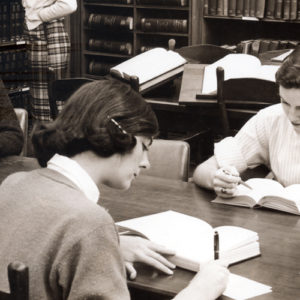 What Your New Roommate's Favorite Book Says About Them

Ah, the first day of college. You obtain a cheery map and find your way to your dorm room. You are either the first or the second...
© LitHub
Back to top