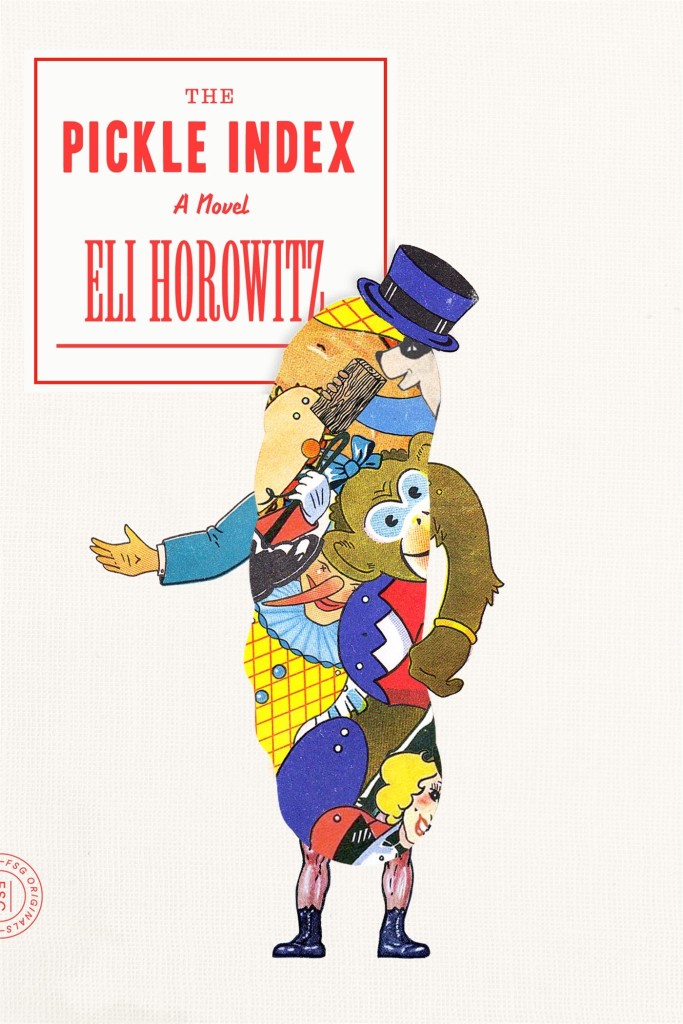 The following is from Eli Horowitz’s novel, The Pickle Index. Horowitz is the co-creator of The Silent History, a digital novel; The Clock Without a Face, a treasure-hunt mystery; and Everything You Know Is Pong, an illustrated cultural history of table tennis. He was the managing editor and then publisher of McSweeney’s, and his design work has been honored by I.D., Print and the American Institute of Graphic Arts.

My father ran a gas farm in the Brosian hill country. At the start of each season, a military airship would hover over the fueling circle, which was the signal for my father to wheel a cramble pole out to the middle of the circle. The airship would connect to the pole and then puff up like a loaf of breadbread. Those were good days. My sisters and I would run out to see the massive ships lurching in the sky above. They often had messages painted on their surfaces—advertisements for the future. I remember one painting that showed a group of children sprinting across a wheat field holding shovels and pink silk ribbons, grinning in their turquoise jumpsuits. Below the image were the words “Fresher Fields in Five Years!” There was a young girl in the foreground doing a cartwheel, and she looked just like me—so much so that I thought it actually was me, the way that children think the whole world has its eyes trained on them.

But my sisters said it, too. I was convinced that this was no coincidence, and—although I never told anybody this—I felt like I’d been chosen to lead the nation in this great movement toward bounty and comfort. It was my ship-proclaimed destiny. I didn’t have a shovel or a silk ribbon, but I had this feeling in my gut that great things were going to happen.

The next year the same airship docked, looking sunbleached and battered, and the painting, though peeling away in flakes, still claimed that the freshness was five years away. And the next year, while we drank cloudy brine and punched one another in the stomach to stop the hunger pangs, we were still five years away from the new age. Five years on, after the antibreakfast initiatives, I understood that we would forever be trailing five years behind the dream of prosperity. I saw that I was not the chosen one. There was no chosen one. My purpose in the world, which once seemed so clear and crisp, had fallen away, and in its place was just the glacial creep of the hard days ahead.

Then one day Undersecretary Moritz visited the farm with two men in coveralls who didn’t speak but just measured things. The height requirements for cramble poles had changed, apparently, and a citizen had reported my father’s violation. My father sighed, looked at my sisters and me, and agreed to join the military. He was sent to fight in the Gurdash Preemption as a burrow trooper, but his tunnel flooded and all we got was a pair of dirty goggles and his teeth in a metal tin. My sisters ran off with a pair of twin nut-shellers, and I was left alone on a leaky gas farm with a bunch of shadows and ghosts. The decades to come stretched out before me, a long flat road to nowhere. I was only at the start, but already I could see the whole journey.

And then Zloty’s circus passed through the village downvalley from the farm. I was out prodding dirt mounds on the tuber hill when I saw the brightly colored tents in the distance, peeking through the dead tree line. It just didn’t make any sense—something like that in a place like this. I stared at the tents for a long time. I still had three more mounds to prod until I filled my self-imposed quota of prodded dirt mounds, but instead I dropped my dirtprod right where I stood and went to investigate.

The show was just beginning when I arrived. Zloty stood in the center of the ring, his arms outstretched, tracing circles in the air to indicate the boundlessness of the wonders we were soon to witness. He used words like intrepid and spellbound and liability waiver. He said we were privileged to witness such feats. Had I ever really witnessed anything before? I searched my memories, but mostly it was just a whole bunch of ordinary seeing. On the farm, there was only the work and how the work got done. You looked at the dirt mounds, you looked at your hands, splinter-rich from the dirt-prod, and then you went to bed. But to witness something—to become an accomplice just by watching—that was something else.

The show itself was not, by any traditional standards, a success. Martin Van Buren slept through his entire performance, and a disappointed customer poured gasoline into the vinegar tub. By the grand finale the bleachers were almost empty. But I hardly noticed—I was entranced. I stayed until the end, when half the troupe came out to take a bow to scattered, anemic applause. And I stayed to watch Reuben push a wide broom across the dirt floor and into a pile in the corner. And while they dismantled the ring and packed up the lights, I curled into a wooden crate filled with novelty wigs and buried myself deep inside. If I wasn’t chosen, I would choose. I’m a performer now, I thought, and I felt the netting of a wig settle into place just above my ears. I thought about my dirt-prod still lying next to those three mounds, and then I fell asleep.

When I woke the crate was open and I was inside a much smaller, smellier tent. The only light came from a tepid fire in a steel pipe. Zloty sat at a folding desk with a book in his hand, and when I stirred he glanced at me. “Our little friend is awake,” he said. He was a slender, long-fingered man with a wispy beard and a sharp mustache. He gave me a sly smile.

There was a rustling sound and Dieter came into view behind Kornblatt. He was the largest man I had ever seen—the width of a two-horse carriage, with a face as broad and sharp as a steam shovel. He leaned in close to examine me.

“We should send her back to Brosi. She can’t be trusted,” Dieter said, looking away from me with disgust and pity.

“You think she’s stowed herself away in my wig case to keep tabs on us,” Kornblatt said, turning just a degree to wink at me.

“Kueve? Kueve was a thief! He joined only for the free cotton candy. Cried himself to sleep each night. Some spy he was.”

“Well,” said Kornblatt, “if this little girl is a spy, then I welcome her, because we have absolutely nothing to hide. Kornblatt’s Multivalent Carnument is a fully licensed and authorized organization, Party-approved and operational for seven full harvests. If she finds a single infraction, even one, I’ll eat your hand raw, Dieter.”

“Eat your own hand,” the giant said, and stumbled out through the flaps. The tent fell silent again and Kornblatt returned to his book. In the dim firelight I could barely make out the title of the volume: Techniques for Staged Immolation. The battered binding looked as if it had survived multiple floods, or maybe a bar fight.

I tried to apologize for stowing away in his wig crate, for the trouble it was going to be to take me all the way back to Brosi, but Zloty just gave me that crooked smile, the one I would come to know so well, and continued reading, making notes in the margins and occasionally chuckling to himself. The fire slowly dwindled to glowing coals, and I sank into the crate and fell back asleep.

I woke to the sound of rainfall. I was still in the crate, but the tent was gone from around me. I turned and saw Martin Van Buren peeing sloshily onto a stack of folded popcorn bags. Beyond him, a slender man in a singlet was unfurling a striped canvas sheet. He noticed me staring. “If you’re going to watch me unfurl,” Kovacsz said, “you might as well do the unfurling yourself and learn that it is not worth watching.” He tossed the canvas bundle at me and walked off toward the big top, which was just being hoisted into place. Dieter tugged on a thick rope tied to the center post while the others advised or heckled. I picked up the canvas and started unfurling.

Somehow I ended up manning the smoke machine that night, and then helped dismantle the bleachers afterward. When they were all packed and ready, I stood off to the side, trying to figure out how I was going to get home to Brosi, but Zloty threw me the key to the caravanner. “Let’s get moving,” he said, hoisting his crate into the back. “It’s a long ride to Klobouk, with plenty of suck-mud on the way, and Kovacsz says driving makes him queasy.”

And so I drove, first to Klobouk and then Maynep and Tront and on to Ploly. Zloty put me to work chipping the guano from the bat cages, and then I got to tote the scroller from town to town, and then I was also ripping tickets, and then one day Zloty gathered everyone together and declared I had been promoted to junior ringmaster. My heart flared for a moment, but I quickly tamped it back down; there was a vat of Reuben’s beard tonic that needed mixing, not to mention Kovacsz’s dietary restrictions and Martin’s incontinence, and also showtime was just three hours away and Dieter had outgrown his performance cloak. Anyway, ringmastering was for ringmasters, and I still had the bat cages to clean. “You are so good with that shovel,” Zloty would say, tousling my hair. “You are a true master. I would not deprive you of an opportunity to display your talents.” Sometimes I thought about the farm, the dirt-prod, the three unfinished mounds, but never for very long—there were so many bat cages.

That was six years ago. I think. The seasons here range from damp to moist to humid, so it’s not always easy to notice the transitions. One winter we were forced to trade the bats for tedfruit and extra jars, so at least there was no more guano to shovel, but still I’m doing a little of everything, and a lot of most. I’m no longer a little girl, and I’m no longer such a sucker for enchantment. I used to dream of someday standing in the center of the ring myself, mesmerizing a hushed throng of ladies and gentlemen, spinning acts into feats. Now mostly I dream of a waterproof blanket, and mostly I keep my mouth shut.

From THE PICKLE INDEX. Used with permission of FSG Originals. Copyright © 2015 by Eli Horowitz.

30 Questions for 30 Writers at the Miami Book Fair 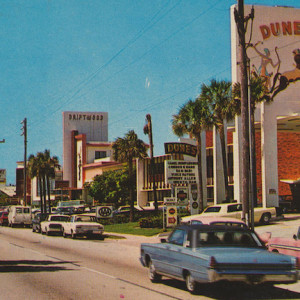 30 Questions for 30 Writers at the Miami Book Fair This November, for the 32nd year in a row, readers and writers of all stripes will descend upon Miami, Florida for what...
© LitHub
Back to top