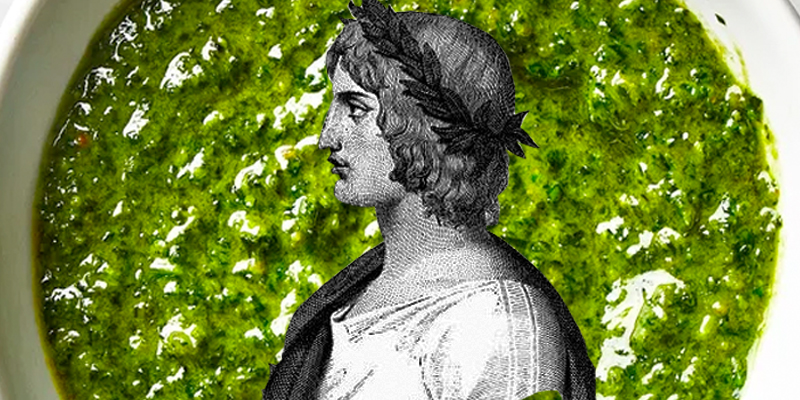 The phrase “e pluribus unum” might have been lifted from Virgil’s recipe for pesto.

Friends, Romans, countrymen, lend me your eyes. I have wonderful news to bring you on this Friday.

The Latin phrase “e pluribus unum” which translates to “out of many, one” and which is the official motto of the United States of America, has roots in the writings of Virgil, the great Roman poet who lived from 70 to 19 BC. But this phrase is not found in The Aeneid, Virgil’s masterwork, or any of his other major poems. It is actually from a recipe he wrote for pesto.

The recipe is in the form of a poem, known as the “Moretum,” and contains the directions to make the food dish known by the same name. While this word literally translates to “salad,” the food described by Virgil is a paste made by pulping basil, garlic, and cheese, what we would refer to today as “pesto.”

I learned this wonderful fact from a series of tweets posed by the popular Twitter account Legonium (@tutubuslatinus) whose purpose is to amusingly educate people about the Latin language and Roman history (as its name might suggest, it uses Legos to do so). The educator behind the account, Anthony Gibbins, posted a series of citations afterwards, mentioning that he learned this fact from The Last Trojan Hero: a Cultural History of Virgil’s Aeneid, by Philip Hardy and published in 2014. A translation of Virgil’s poem, which Gibbins also cites, reads “they one by one do lose/Their proper powers, and out of many comes/A single colour, not entirely green…”

So, when Virgil writes the phrase “e pluribus unus” (the word has a different ending, because of its function in the sentence), he is referring to how the bright color of the paste is formed from mashing all the ingredients together. “Out of many, one,” indeed.

The “Moretum” can be found in a poetry collection called Appendix Vergiliana, which is an assemblage of poems thought to be by Virgil and other Roman poets. The entire collection was once thought to have been written by a juvenile Virgil, but this has since been dispelled.

The other most notable early use of the concept of “e pluribus unum” can be found later in De Officiis, a treatise completed by Cicero in 44 BC, who uses the phrase “unus fiat ex pluribus” (which translates to “one made out of many”) in discussing the nature of family, that many individuals come together to make one unit.

But the phrase was popularly used in the eighteenth-century, often appearing on the cover of a popular periodical called The Gentleman’s Magazine. The Swiss-American Pierre Eugene du Simitiere, who was one of the designers of the Great Seal in 1776, suggested that the phrase be incorporated to represent the unification of the thirteen colonies in a new, single, sovereign nation. A nation where, when you think about it, probably no one served pesto.

You can read the whole recipe here, in English.