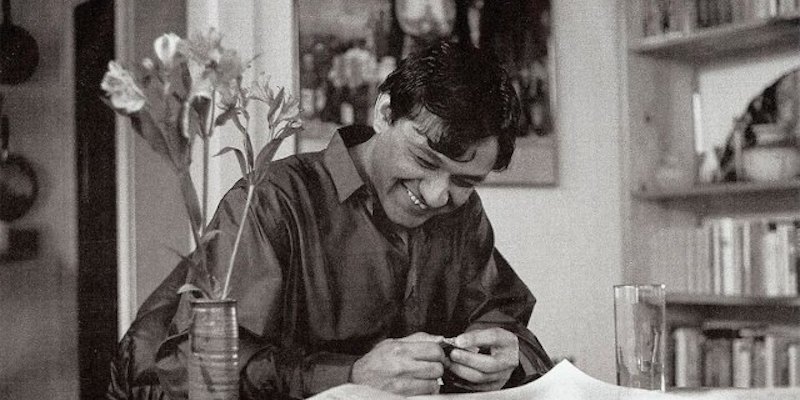 “The past is happening quickly.” Revisiting one of the best poems on time and loss.

73 years ago, Kashmiri-American poet Agha Shahid Ali was born. During his short life (he passed at the age of 52 due to cancer), he wrote celebrated collections like The Country Without a Post Office, Rooms Are Never Finished, and A Nostalgist’s Map to America. The latter includes “Snow on the Desert,” which happens to be one of the best poems on time and loss. It begins like this: “‘Each ray of sunshine is seven minutes old,’/ Serge told me in New York one December night.” Ali is in a car with his sister, driving her to Tucson International, as he shares this. She asks, “‘So when I look at the sky, I see the past?” And from there, we follow the ray of sunshine as it creates many layers of the past—many layers of history—throughout the poem.

The “past is happening quickly,” according to Ali, and he ushers our attention to the saguaros out the car window. They “have opened themselves, stretched/ out their arms to rays millions of years old.” “In each ray” is “a secret of the planet’s/ origin.” But instead of delving into this—into what this secret may entail, how we may come to know or understand it—Ali moves us elsewhere, reminding us that he is “driving by the ocean that evaporated [t]here, by its shores.”  The history here is also heavy, but we don’t get to stay with it. Instead, we are reminded again that the past is happening quickly, so quickly this time that “each stoplight hurts [them] into memory” and Ali “realizes that the earth is thawing from longing into longing.” He anticipates an ending, but once again, we don’t get to know the details.

As we get to the final section of the poem, Ali’s carefully crafted, parallel couplets break apart. He begins to interrupt them with gaps and spaces, making room for a moment in time most poignant in the poem: “in New Delhi one night/ as Begum Akhtar sang, the lights went out./ It was perhaps during the Bangladesh War.” Amidst “sirens” and “air-raid warnings,” “the microphone was dead, but she went on/ singing,” her voice sounding like it “was coming from far/ away, as if she had already died.” And in this precious and almost-eerie moment, Ali ushers in quite possibly the best ending to a poem I’ve read to date. He writes, it was “a time to think of everything the earth/ and I had lost, of all/ that I would lose,/ of all that I was losing.” The repetition and change—of words and their tenses—solidify the one thing that has been driving the whole poem so far: loss. Though layered with time and memory and history, the poem is deeply concerned with the potential of losing all of those things. And as a reader who’s been gathering the various threads of the poem—who’s been asked so far to constantly flit from moment to moment—you’re brought to these lines to look at those threads in a new kind of light: one that is diminishing and reaching an end. And in this diminishing, ending light, the deep and intricate significance of those threads—what they mean and why they matter—shine bright and pierce through the words.