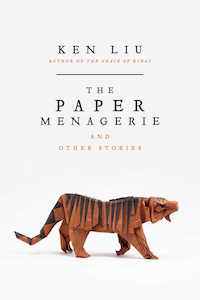 The following is from Ken Liu’s collection of short stories, The Paper Menagerie. Ken Liu is an author and translator of speculative fiction, as well as a lawyer and programmer. His novel, The Grace of Kings, is the first in a silkpunk epic fantasy series. He lives with his family near Boston, Massachusetts.

One of my earliest memories starts with me sobbing. I refused to be soothed no matter what Mom and Dad tried.

Dad gave up and left the bedroom, but Mom took me into the kitchen and sat me down at the breakfast table.

She set the paper down, plain side facing up, and began to fold it. I stopped crying and watched her, curious.

She turned the paper over and folded it again. She pleated, packed, tucked, rolled, and twisted until the paper disappeared between her cupped hands. Then she lifted the folded-up paper packet to her mouth and blew into it, like a balloon.

A little paper tiger stood on the table, the size of two fists placed together. The skin of the tiger was the pattern on the wrapping paper, white background with red candy canes and green Christmas trees.

I reached out to Mom’s creation. Its tail twitched, and it pounced playfully at my finger. “Rawrr-sa,” it growled, the sound somewhere between a cat and rustling newspapers. I laughed, startled, and stroked its back with an index finger. The paper tiger vibrated under my finger, purring.

I didn’t know this at the time, but Mom’s kind was special. She breathed into them so that they shared her breath, and thus moved with her life. This was her magic.

Dad had picked Mom out of a catalog.

One time, when I was in high school, I asked Dad about the details. He was trying to get me to speak to Mom again.

He had signed up for the introduction service back in the spring of 1973. Flipping through the pages steadily, he had spent no more than a few seconds on each page until he saw the picture of Mom.

I’ve never seen this picture. Dad described it: Mom was sitting in a chair, her side to the camera, wearing a tight green silk cheongsam. Her head was turned to the camera so that her long black hair was draped artfully over her chest and shoulder. She looked out at him with the eyes of a calm child.

“That was the last page of the catalog I saw,” he said.

The catalog said she was eighteen, loved to dance, and spoke good English because she was from Hong Kong. None of these facts turned out to be true.

He wrote to her, and the company passed their messages back and forth. Finally, he flew to Hong Kong to meet her.

“The people at the company had been writing her responses. She didn’t know any English other than ‘hello’ and ‘good-bye.’”

What kind of woman puts herself into a catalog so that she can be bought? The high-school-me thought I knew so much about everything. Contempt felt good, like wine.

Instead of storming into the office to demand his money back, he paid a waitress at the hotel restaurant to translate for them.

“She would look at me, her eyes halfway between scared and hopeful, while I spoke. And when the girl began translating what I said, she’d start to smile slowly

He flew back to Connecticut and began to apply for the papers for her to come to him. I was born a year later, in the Year of the Tiger.

At my request, Mom also made a goat, a deer, and a water buffalo out of wrapping paper. They would run around the living room while Laohu chased after them, growling. When he caught them he would press down until the air went out of them and they became just flat, folded-up pieces of paper. I would then have to blow into them to reinflate them so they could run around some more.

Sometimes, the animals got into trouble. Once, the water buffalo jumped into a dish of soy sauce on the table at dinner. (He wanted to wallow, like a real water buffalo.) I picked him out quickly but the capillary action had already pulled the dark liquid high up into his legs. The sauce-softened legs would not hold him up, and he collapsed onto the table. I dried him out in the sun, but his legs became crooked after that, and he ran around with a limp. Mom eventually wrapped his legs in Saran wrap so that he could wallow to his heart’s content (just not in soy sauce).

Also, Laohu liked to pounce at sparrows when he and I played in the backyard. But one time, a cornered bird struck back in desperation and tore his ear. He whimpered and winced as I held him and Mom patched his ear together with tape. He avoided birds after that.

And then one day, I saw a TV documentary about sharks and asked Mom for one of my own. She made the shark, but he flapped about on the table unhappily. I filled the sink with water and put him in. He swam around and around happily. However, after a while he became soggy and translucent, and slowly sank to the bottom, the folds coming undone. I reached in to rescue him, and all I ended up with was a wet piece of paper.

Laohu put his front paws together at the edge of the sink and rested his head on them. Ears drooping, he made a low growl in his throat that made me feel guilty.

Mom made a new shark for me, this time out of tinfoil. The shark lived happily in a large goldfish bowl. Laohu and I liked to sit next to the bowl to watch the tinfoil shark chasing the goldfish, Laohu sticking his face up against the bowl on the other side so that I saw his eyes, magnified to the size of coffee cups, staring at me from across the bowl.

When I was ten, we moved to a new house across town. Two of the women neighbors came by to welcome us. Dad served them drinks and then apologized for having to run off to the utility company to straighten out the prior owner’s bills. “Make yourselves at home. My wife doesn’t speak much English, so don’t think she’s being rude for not talking to you.”

While I read in the dining room, Mom unpacked in the kitchen. The neighbors conversed in the living room, not trying to be particularly quiet.

“He seems like a normal enough man. Why did he do that?”

“Do you think he can speak English?”

The women hushed. After a while they came into the dining room.

“Hello there! What’s your name?”

Mom came into the dining room then. She smiled at the women. The three of them stood in a triangle around me, smiling and nodding at each other, with nothing to say, until Dad came back.

Mark, one of the neighborhood boys, came over with his Star Wars action figures. Obi-Wan Kenobi’s lightsaber lit up and he could swing his arms and say, in a tinny voice, “Use the Force!” I didn’t think the figure looked much like the real Obi-Wan at all.

Together, we watched him repeat this performance five times on the coffee table. “Can he do anything else?” I asked.

Mark was annoyed by my question. “Look at all the details,” he said.

I looked at the details. I wasn’t sure what I was supposed to say.

Mark was disappointed by my response. “Show me your toys.”

I didn’t have any toys except my paper menagerie. I brought Laohu out from my bedroom. By then he was very worn, patched all over with tape and glue, evidence of the years of repairs Mom and I had done on him. He was no longer as nimble and sure-footed as before. I sat him down on the coffee table. I could hear the skittering steps of the other animals behind in the hallway, timidly peeking into the living room.

“Xiao laohu,” I said, and stopped. I switched to English. “This is Tiger.” Cautiously, Laohu strode up and purred at Mark, sniffing his hands.

Mark examined the Christmas-wrap pattern of Laohu’s skin. “That doesn’t look like a tiger at all. Your mom makes toys for you from trash?”

I had never thought of Laohu as trash. But looking at him now, he was really just a piece of wrapping paper.

Mark pushed Obi-Wan’s head again. The lightsaber flashed; he moved his arms up and down. “Use the Force!”

Laohu turned and pounced, knocking the plastic figure off the table. It hit the floor and broke, and Obi-Wan’s head rolled under the couch. “Rawwww,” Laohu laughed. I joined him.

Mark punched me, hard. “This was very expensive! You can’t even find it in the stores now. It probably cost more than what your dad paid for your mom!”

I stumbled and fell to the floor. Laohu growled and leapt at Mark’s face.

Mark screamed, more out of fear and surprise than pain. Laohu was only made of paper, after all.

Mark grabbed Laohu and his snarl was choked off as Mark crumpled him in his hand and tore him in half. He balled up the two pieces of paper and threw them at me. “Here’s your stupid cheap Chinese garbage.”

After Mark left, I spent a long time trying, without success, to tape together the pieces, smooth out the paper, and follow the creases to refold Laohu. Slowly, the other animals came into the living room and gathered around us, me and the torn wrapping paper that used to be Laohu.

My fight with Mark didn’t end there. Mark was popular at school. I never want to think again about the two weeks that followed.

I came home that Friday at the end of the two weeks. “Xuexiao hao ma?” Mom asked. I said nothing and went to the bathroom. I looked into the mirror. I look nothing like her, nothing.

At dinner I asked Dad, “Do I have a chink face?”

Dad put down his chopsticks. Even though I had never told him what happened in school, he seemed to understand. He closed his eyes and rubbed the bridge of his nose. “No, you don’t.”

Mom looked at Dad, not understanding. She looked back at me. “Sha jiao chink?”

She tried. “What happen?”

I pushed the chopsticks and the bowl before me away: stir-fried green peppers with five-spice beef. “We should eat American food.”

“We are not other families.” I looked at him. Other families don’t have moms who don’t belong.

He looked away. And then he put a hand on Mom’s shoulder. “I’ll get you a cookbook.”

Mom turned to me. “Bu haochi?”

Mom reached out to touch my forehead, feeling for my temperature. “Fashao la?”

I brushed her hand away. “I’m fine. Speak English!” I was shouting.

“Speak English to him,” Dad said to Mom. “You knew this was going to happen someday. What did you expect?”

Mom dropped her hands to her side. She sat, looking from Dad to me, and back to Dad again. She tried to speak, stopped, and tried again, and stopped again.

Dad shook his head. “You are in America.”

Mom hunched down in her seat, looking like the water buffalo when Laohu used to pounce on him and squeeze the air of life out of him.

“And I want some real toys.”

From THE PAPER MENAGERIE. Used with permission of Saga Press. Copyright © 2016 by Ken Liu.

Who Can Fictionalize Slavery? 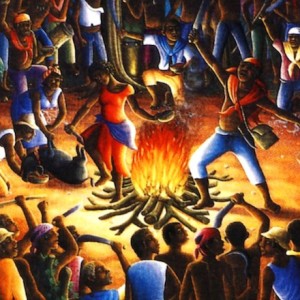 Who Can Fictionalize Slavery? There is much to be said on the issue of who is allowed to write whom, that thorny thicket from which no white/male/cisgender/otherwise-privileged...
© LitHub
Back to top