The Organs of Sense 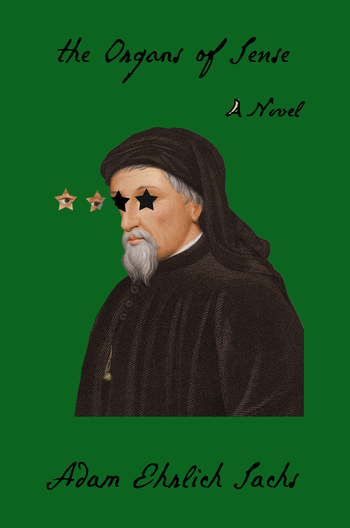 The following is an excerpt from Adam Ehrlich Sachs' novel The Organs of Sense, a story about the nature of perceptions and the ways the heart of a loved one can prove as unfathomable as the stars. Adam Ehrlich Sachs is the author of the collection Inherited Disorders: Stories, Parables, and Problems. His work has appeared in The New Yorker, Harper’s Magazine, and n+1, among other publications, and he was named a 2018 National Endowment for the Arts Literature Fellow.

In an account sent to the Philosophical Transactions but for some reason never published there, or anywhere else, a young G. W. Leibniz, who throughout his life was an assiduous inquirer into miracles and other aberrations of nature, related the odd and troubling encounter he had with a certain astronomer who’d predicted that at noon on the last day of June 1666, the brightest time of day at nearly the brightest time of year, the Moon would pass very briefly, but very precisely, be-tween the Sun and the Earth, casting all of Europe for one instant in absolute darkness, “a darkness without equal in our history, but lasting no longer than four seconds,” the astronomer predicted, according to Leibniz, an eclipse that no other astronomer in Europe was predicting, and which, Leibniz explained, drew his notice in part because the astronomer in question, whose observations of the planets and the fixed stars were supposedly among the most accurate and the most precise ever made, superior to Tycho’s, was blind, and “not merely completely blind,” Leibniz wrote (in my translation from the Latin), “but in fact entirely without eyes.”

There could be no question of his feigning blindness because his sockets, and this much was known, were empty, wrote Leibniz, for whom this encounter seems to have both hastened and brought to a close the sole significant intellectual crisis of a philosophical career otherwise dominated by the sanguine rationalism for which it is now known, and for which, at least since the time of Voltaire, it has periodically been ridiculed.

Now, this astronomer had built, it was rumored, the longest telescope known to man, and therefore the most powerful, a telescope said to stretch nearly two hundred feet, reported Leibniz; but according to all known laws of optics the true power of a telescope is a function also of the power of the eye that peers into it, left or right, and the power of the eye is of course a function of the existence of the eye, and in this case neither eye existed, “neither the left nor the right.” Hence in mid-June when Leibniz set out from Leipzig for Bohemia—first by carriage, down sun-dappled forest lanes, then, upon reaching the foot-hills, by horse, past the black mouths of salt mines, and finally, in he high mountains, by foot, along muddy paths forged by goats, over passes still deep in snow, a journey it would be all but impossible to imagine him making in his big curly wig and expensive silk stockings if we did not have this textual evidence that he indeed made it, although the absurd image of the Leibnizian wig poking through a snowdrift, or of Leibniz himself stepping around a goat, has been sufficient in some quarters to cast doubt on the authenticity of the whole document—he knew that he was dealing most likely with a mystic, a madman, or a cunning fraud. But there was, as he explained to the Philosophical Transactions, a fourth and presumably final possibility, a possibility as intriguing as it was improbable: that he would encounter up there in the snowy mountains of Bohemia a man of reason, a man of science, whose prophesied flash of darkness would actually come to pass, who in other words stared up at the sky with his empty sockets and saw somehow what no other astronomer in the world could see, foresaw with no eyes what they could not foresee with two. If that were the case, Leibniz concluded, then when the light went on again four seconds later it would find the laws of optics in a shambles, knowledge in ruins, the human mind in an intimate embrace with the world, and the human eye in a state of disgrace.

He intended to reach the observatory by sunrise on the twenty-eighth, to stay there two days and two nights in order to “rigorously but surreptitiously assess the astronomer’s sanity” through “a series of subtly stringent interviews proceeding from the political to the theological,” i.e., from the lowest to the high-est, “by way of the ethical, the logical, the astronomical, and the metaphysical,” and finally at noon on the third day, i.e., the thirtieth, to observe by the astronomer’s side the Moon’s predicted occultation of the Sun, the foretold four seconds of darkness on Earth, “the assessment sine qua non of his sanity.”

He could pass my assessment without passing God’s, Leibniz wrote.

Still we never increase the stringency of our assessments!

Of course, even the most stringent human assessment is ridiculous in light of even the laxest assessment administered by God, Leibniz wrote.

It is worth noting that two weeks earlier, for reasons that re-main obscure some three and a half centuries later, Leibniz had been denied his doctorate in law by the faculty of the University of Leipzig, despite having recently published his first book, On the Art of Combinations. Upon hearing the verdict he had gone for a walk on the outskirts of town, in the Rosental woods, where, while staring at the trunk of a tree, he was struck for the first time—as he recalled decades afterward in a letter to the French skeptic Simon Foucher—by the “calamitous” implications of the philosophy of Descartes, who had severed the mind from the world, transformed the world into a gargantuan ma-chine, and made the mind doubt everything but its own existence. For a brief moment in his nineteenth year Leibniz lost his faith in reason. The next fortnight finds him en route to Bohemia. I imagine him trudging through that summer snow in search not only of material for publication but of a happier and more harmonious relationship between mind and world.

In any case, something must have gone wrong, his calculations, his cartography, for it was not until after sunrise on the thirtieth, more than two full days behind schedule and only a few hours before the predicted eclipse, that Leibniz reached the observatory, and almost without realizing it, for he was at that point, as he recounts, suffering from hunger, dehydration, and hypothermia (“I have nearly completed a treatise on some remarkable properties of mountains,” he reports to the Philosophical Transactions), and had hallucinated, over the course of the night prior, while staggering from one peak to the next under the lash of a freezing rain, a vast number of astronomical observatories “of every conceivable and inconceivable geometry,” not only triangular observatories and pentagonal observatories but observatories of hundreds of sides and in fact even thousands of sides, “in short, a night of pure polygonal unease.” “Observatories were constantly popping out of the mist, and only after I ran up to them in relief did I realize they were in my head.” So, when the Sun rose and he saw right in front of him a small, perfectly circular tower of red brick, crumbling in parts, perched on the edge of a high cliff well above the clouds, with an immense telescope, even longer than rumored, protruding from it at an angle over the void, he assumed at first (“not unreasonably!”) that this circular observatory was just another illusion produced by his bedeviled mind, the final illusion, the observatory toward which last night’s distressing sequence was inexorably tending, and which, knowing his mind, his mind would not rest until it had produced. (“In the astronomer’s mind I would soon encounter a similar, but of course not identical, since no two things in nature are identical, sort of mind.”) It was only when he heard the telescope creak (“animalistically”) in the wind that Leibniz realized he had actually found it, “it was not inside my head, it was actually out there in the snow on the edge of the cliff.”

On the next page of his account he depicts with a draftsman’s hand the intricate system of pulleys and poles that held the heavy iron instrument aloft, marking lengths and angles with terrific precision. It is an impressive diagram, a marvel of its kind, far more detailed than the diagrams most instrument-makers of the time drew or commissioned for their own contraptions. The caption reads: “It was not inside my head.”

Marie Kondo is writing another book for you to throw out. 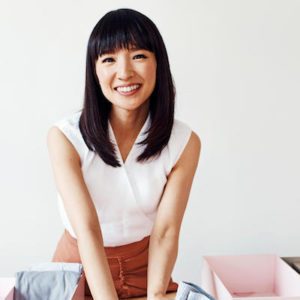 Marie Kondo is writing another book for you to throw out. As if to prove once and for all that she does not actually require you to throw away all your books, people, so put down...
© LitHub
Back to top