In December 2017, I was faced with my yearly dilemma: What to buy my father for Christmas? He wasn’t keen on gifts and had everything he needed, every tool known to man, from soldering iron to chainsaw.

My father’s a short, unassuming man in his eighties, flat-capped and mustachioed; he only speaks when he has something to say. He is still-water that runs deep, but you have to know him well to understand this; even those closest to him interpret his silence as moodiness. He’s the Jack Lemmon character in Grumpy Old Men: Brooding, misunderstood.

As I pondered the problem called my father that December, I had a eureka moment, a flash of inspiration: I would make something, uniquely from me. It would be something that would make my father feel treasured and draw him out of his shell. I would buy a cheap notepad and fill it with prompts that would cajole him into writing about his life. If I couldn’t get him to talk, perhaps I could get him to write.

I’ve always been interested in family stories, my father’s in particular. He grew up in a Cypriot village at a time of political unrest, during the island’s struggle for independence. His education was cut short because his father couldn’t afford the bus fare to school. In the 1960s he moved to England with ten pounds in his pocket and spent his first night in a telephone box. His was a rags-to-comfortable-life story that inspired the writing of my first novel.

With the home-styled book in mind, I called my colleague, Anthony Cropper, then head of creative writing at Nottingham University, and asked for help. We’d spent many hours discussing the best ways to get people writing, sharing ideas that worked in our classrooms.

We put our heads together and created a bespoke book for my father, filled with lively exercises that would allow him to write his story in short, manageable bursts.

My father’s response to his gift was characteristically reserved, but I could see it in his eyes: he was pleased. I encouraged him to write—in his own time—and left him to it. A month later, he came to visit and showed me what he’d written. I don’t think much of it, he said. I was blown away. More than the telling of his story, the book was a window into his soul.

In response to a prompt asking him to explore his name, he wrote:

My Greek name is Yiorko. It originates from ye-or-gos which is farmer. It is humble and uncomplicated. It is based on honesty and trust. My nickname is Yiorkoulli which means Yiorkos who is small and petite. To this day if you don’t say Yiorkoulli in my village people won’t realize it’s me. I quite like it.

He said the book was a safe place to express emotions he would never talk about openly, that it got his brain going and helped him forget everyday problems. “It’s good to remember your heyday,” he said, “even the bad memories. To think, I lived through that and survived.” Just as I had hoped, the book made him feel good about himself. His response was the green light for what would come next.

Anthony and I applied for Arts Council funding to produce an illustrated version of the book of prompts, to print 300 copies to use in the community with people who weren’t ordinarily exposed to writing workshops. We worked with women on probation, prison inmates, refugees and the elderly. We took the book to a broad range of settings and to people who had vastly different backgrounds.

We didn’t know what to expect when we went to meet the probation group. The women were understandably nervous at first, but soon things got going with questions like: What would you change if you were in charge of the world?

The answers included, “there would be no need for drugs or alcohol… trips to Mediterranean islands would be free and would take five minutes… there would be no domestic violence… poverty would be eradicated… parking would be free in the town center.” They wrote about experiences they had never shared with their probation officers, about domestic abuse and difficult childhoods, about hopes for the future.

At a “being dad” group, made-up of prisoners hoping to reconnect with their children, one inmate wrote the following lines to his son: “You are an Irish jig, the satisfying sight of a freshly plowed field in the morning, a ride of an rickety roller coaster.” He was moved to tears by what he’d accidentally revealed.

People were often surprised by what they wrote and by the fact that they could write at all, but that’s the beauty of writing about personal experiences: With the right encouragement, everyone can do it. Everyone is an expert of their own life.

We designed the book to work on a variety of levels. There’s a prompt on every page, starting off easy and slowly becoming more challenging. There are links to wider reading and short extracts from writers like Tim O’Brien, Seamus Heaney, Lesley Glaister, Ernest Hemingway, and other writers who inspired us and might do the same for others. The book can be used by those studying creative writing at an advanced level, as well as people who have never written before.

We’ve seen first-hand the therapeutic power of writing and believe everyone should give it a try. The Accidental Memoir is a fun and accessible way to dabble in writing or improve technique by daily practice; it isn’t just for the elderly, but for all ages. The Accidental Memoir is a spur for creativity, a friendly, accessible, life-writing guide with a smattering of informed advice.

My father continues to write in his book. The entries are made in blunt pencil and strewn with spelling errors, but that doesn’t matter: it only adds to the charm. The Accidental Memoir has become part of his well-being toolkit and a conversation starter at family gatherings. It’s a way to celebrate his life and understand him just a little bit better. 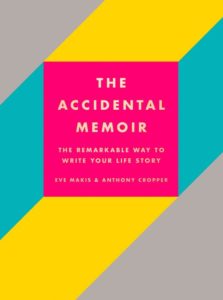 The Accidental Memoir: The Remarkable Way to Write Your Life Story, is out May 2019 from Fourth Estate, an imprint of Harper Collins

Eve Makis worked as a journalist and radio presenter in the UK and Cyprus before becoming a novelist. Her first novel, Eat, Drink and be Married, was awarded the Young Booksellers International Book of the Year Award, whilst a screen adaptation of her third book, Land of the Golden Apple, won several best in category awards at International Film Festivals. Her fourth novel, The Spice Box Letters, was shortlisted for the Jerwood Fiction Uncovered Prize, the East Midlands Book Award and received the Aurora Mardiganian Gold Medal.

Taking an Author's Photo Is Like Going on a First Date 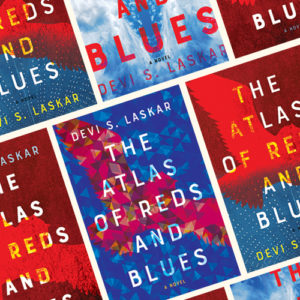 Devi Laskar’s debut novel The Atlas of Reds and Blues takes place over the course of one morning, as "Mother," an American-born...
© LitHub
Back to top
Loading Comments...