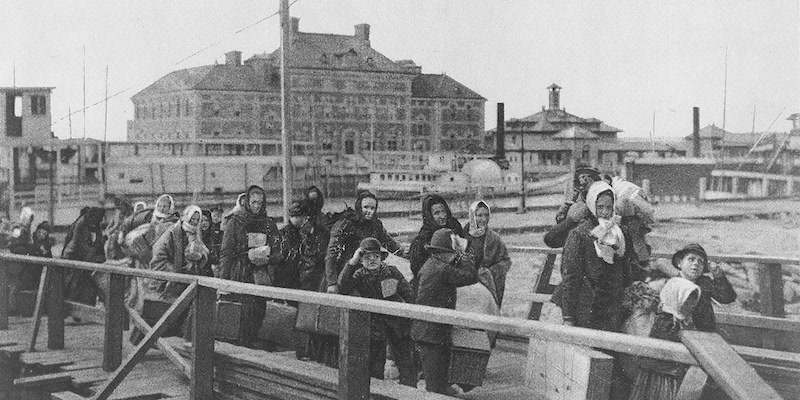 The Myth of the Rapid Mobility of European Immigrants

By Ran Abramitzky and Leah Boustan

For all of their differences, recent presidents Barack Obama and Donald Trump have one thing in common: a firm belief that European immigrants arrived poor but managed to contribute to the country through their own hard work and ingenuity. President Obama praised Italian immigrants, saying that they “often came here with nothing” but overcame their challenges to succeed in every walk of life.

Trump made headlines around the world by praising European immigrants of yore—he put in an especially good word for Norwegians—in contrast to recent immigrants who he claimed were less likely to get ahead. “Why do we want all these people from ‘shithole countries’ coming here?” Trump famously asked in a closed-door meeting, referring to countries like Haiti and Nigeria.

But are immigrants these days really that different from immigrants in the past? In fact, during the Age of Mass Migration, Norway was one of the poorest countries in Europe. Norwegian immigrants tended to settle in rural places in Minnesota and the Dakotas, and to work in fishing, logging, and farming—the classic “Norwegian bachelor farmers” of Garrison Keillor’s A Prairie Home Companion.

In our data, Norwegians were among the lowest-paid immigrant groups in the early 20th century, earning $4,000 less annually than US-born workers (in today’s dollars) and failing to make up much of this earnings gap even after thirty years in the country. When we discussed this gap with a colleague, the great-grandson of Norwegian immigrants, he jokingly decided to add the Norwegian vowel ø back into his last name on his résumé to show how far he had been able to rise from this humble background.

A stark example of this second group is the case of wildly successful immigrant entrepreneurs. These entrepreneurs might appear to be a self-made lot, but a closer look shows that they tend to come from families with high initial levels of wealth, education, or both. In fact, it is rare to find a captain of industry with a real rags-to-riches story.

Pierre Omidyar, the founder of eBay, is from an Iranian family; his father is a surgeon who worked at Johns Hopkins University and his mother has a PhD in linguistics. Sergey Brin, co-creator of Google, was born in Moscow; his father is a professor of mathematics and his mother is a NASA scientist. The multidimensional entrepreneur Elon Musk was raised in South Africa by an engineer father who once co-owned an emerald mine in Zambia. Eric Liu, an activist and former White House speechwriter, wrote in his memoir of his family’s immigration from Taiwan, A Chinaman’s Chance, that his parents “arrived with more advantages of station and education than is typically acknowledged”—an apt statement about the success of many immigrants who arrive with considerable resources today.

Immigrants who arrive with higher degrees and business connections are highly visible today, but they are not the majority. The majority start out well behind US-born workers—pulling down the average earnings for all immigrants so much that the average gap in earnings between the US born and all immigrants today is about 30 percent. In other words, if you include all the Elon Musks and Sergey Brins in your calculations—as we did—you find that immigrants still earn, on average, only seventy cents for every dollar earned by US-born workers. This earnings gap is three times wider than in the past. (Recall that the earnings gap during the Age of Mass Migration was only 10 percent.)

That may paint a bleak picture of present-day immigration, but if you take a longer view the news is good: with time spent in the United States, today’s immigrants catch up to US-born workers at the same pace as in the past. Like European immigrants back then, immigrants from around the world today (particularly those who arrive earning less than the US born) increased their earnings over the course of their working lives, although they were not able to fully close this earnings gap in the first generation. Yet immigrants do close a portion of this gap, which shrinks from 30 percent upon arrival to 16 percent twenty years later.

Immigrants switch jobs regularly, constantly keeping their eyes out for new opportunities. But the set of jobs open to many immigrants is relatively narrow, so they make limited progress during their working lives. My Le, an immigrant from Vietnam, might hold the record for the most job hopping: seventy-five jobs over a single  decade, the 1980s. My told his story to Ellen Alexander Conley for her book The Chosen Shore. “My first job in this country,” he says, “was at a nursing home washing dishes. Once I learned a little English, I went to the floors and helped the patients pick good food from the menu. I have had a total of seventy-five jobs over here during the last seven years. I have worked at Roy Rogers and 7-Eleven. I worked all the time except for the times I was in school.”

If immigrants don’t quickly catch up in earnings to the US born—neither today nor in the past—then where did the myth of rapid immigrant mobility come from? One possibility is that boosterish stories like Rocco’s tale of quickly rising in America have been accepted uncritically, especially in how Americans view the past.

As time goes by, family stories also soften into myth, with the immigrant generation remembered as penniless—arriving with “a goat and one Bitcoin,” as the comedian Desus put it. With distorted memories suggesting a lowly start, any later success seems all the more impressive.

Once we got access to all the records—and, crucially, once we were able to follow individual immigrants over time—we found that the rags-to-riches story is nothing more than a data illusion.

Another possibility is that immigrant success was a genuine hallmark of an earlier era, before the Age of Mass Migration, and that this national myth stuck. Scholars have found that the last time that rapid immigrant mobility was a feature of the American economy was before the Civil War. Immigrants who arrived in the 1840s and 1850s, soon after the invention of the steamship, actually did move up the occupational ladder faster than the US born.

But there’s a third possibility that we want to suggest here: the nostalgic view of immigrant success a century ago persisted for so long because we simply didn’t have the data necessary to check the facts. What’s more, the data that was available to researchers led scholars to draw the wrong conclusions from what they saw in the numbers. Once we got access to all the records—and, crucially, once we were able to follow individual immigrants over time—we found that the rags-to-riches story is nothing more than a data illusion.

To begin to understand this illusion, you need to remember that the most accurate way to measure upward mobility requires following a person over time—from childhood to adulthood or from the beginning of his career to its end. And that requires being able to link data across censuses.

But previous generations of researchers did not have the linked data because of census privacy rules. (Recall that the Census Bureau releases identifying information such as first and last name only after seventy-two years.) Researchers were also unable to digitize what amounted to literally millions of census manuscripts.

Without access to linked data across censuses, scholars tried to learn as much as possible from the data that they did have. The most famous study of this type concluded that immigrants could rise quickly from rags to riches by comparing immigrants in the 1970 census who had arrived in the United States in different years.

When we think more carefully about that study, it’s easy to see that its conclusions are unwarranted. In 1970, many recent arrivals were immigrants from poor countries in Latin America, Asia, and the Caribbean who arrived after 1965. Long-standing immigrants who arrived in the 1930s and 1940s were part of the small cohort escaping from Europe at the outbreak of World War II. It doesn’t seem plausible that a low-paid Mexican farmworker, say, would reach the earnings of a German scientist, even after twenty-five years go by.

Subsequent research noted that this study was essentially comparing apples to oranges. Comparing a low-paid apple to a high-paid orange creates the illusion of earnings catch-up in the data: comparing immigrants from a single census (inherently imperfect data) supported the idea that immigrants start with little but quickly catch up and even overtake the earnings of US-born workers.

Immigrants who eventually return to their country of origin also contribute to this data illusion, in a way that even following a group of immigrants who arrived at the same time couldn’t dispel. These return migrants (as scholars call this group) are included in the data on recent arrivals, but they disappear from the data after five or ten years, when they return home. Many immigrants return home because they struggled to find a good job in the United States. Others have no trouble finding high-paying work, returning only after saving enough money to afford a more comfortable lifestyle in their home country.

Using the new linked data that follows individual immigrants over time, we were able to obtain much more accurate data, eliminating the illusions that distorted past research and contributed to the myth that immigrants in the past caught up quickly to US-born workers. The reality is that although immigrants do make up some ground as they spend more years in the United States—both in the past and today—the pace of progress is dramatically slower than originally thought. 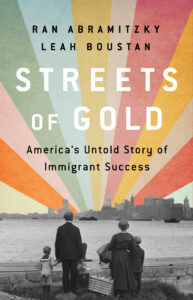 This article has been excerpted from Streets of Gold: America’s Untold Story of Immigrant Success by Ran Abramitzky and Leah Boustan. Copyright © 2022. Available from PublicAffairs, an imprint of Perseus Books, LLC, a subsidiary of Hachette Book Group, Inc.

Ran Abramitzky is professor of economics and the Senior Associate Dean for the Social Sciences at Stanford University, a research associate at the National Bureau of Economic Research, a senior fellow at the Stanford Institute for Economic Policy Research, and a former co-editor of Explorations in Economic History. Weaving his family story together with extensive economic and historical data, Abramitzky’s prize-winning book, The Mystery of the Kibbutz examines how communities based on income equality survived in Israel for over a century, and the conditions under which more equal societies can thrive. Leah Boustan is professor of economics and director of the Industrial Relations Section at Princeton University. She is also co-director of the Development of the American Economy Program at the National Bureau of Economic Research, and serves as co-editor of the American Economic Journal: Applied Economics. Her prize-winning scholarly book, Competition in the Promised Land, examines the effect of the Great Black Migration from the rural South during and after World War II. She has written for The New York Times, The American Prospect, and Slate. 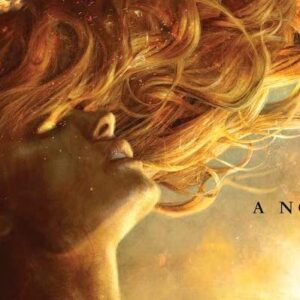 As we hit the halfway mark for the year, June has a bevy of new releases in the sci-fi and fantasy space—and it doesn’t...
© LitHub
Back to top
Loading Comments...