No matter how exhaustively we post, tweet, comment, and curate our feeds, it isn’t until we reach a plateau, a full-stop, that we realize how bound we are to the routine maintenance of our online identities. If Albert Camus were alive today, he’d write “The Myth of Sisyphus” about our massive, shared, ubiquitous digital brain—social media rendered as yet another component of the absurd. It is likely he would explore and exploit social media as a leading example of the duality of the human condition: on its surface, the pursuit of happiness and meaningful connection; underneath, a void without meaning, lurking behind the mirror of self-perception. Like anything else, it’s harmless until it isn’t, until we wake and realize we can no longer live without its conditions, its effects, its functionalities.

The man in the phone booth—it’s a familiar and memorable image from Camus’ philosophical text, one that you might recall: Camus presents the reader with the image of a man in a phone booth. We are on the outside looking in, watching the man speak, but we cannot hear him. Camus goes on to explain “this incalculable tumble before the image of what we are, this ‘nausea’”—a vision of the inherently absurd. I wonder what has really changed? We walk around in invisible, digital booths of our own making, hidden to others in plain sight, performing our communications with the rest of the world: standing at the streetcorner, staring down at a phone; walking down the street, staring down at a phone; talking to someone nearby while fumbling, staring down at a phone. Staring at a phone. The now-typical and ubiquitous technological innovations of the 21st century have simultaneously transformed and amplified the most basic principles of the absurd. We have all become Sisyphus, pushing our rocks up a hill littered with hyperlinks and tweets, perpetually, futilely, refreshing the page of existence.

For Camus, Sisyphus is a perfect exemplar of the absurd: he defies the gods and is punished for this defiance. He is forced to push a rock up a mountain for eternity. When he reaches the top, the rock has only one way to go: back down. It is only when Sisyphus becomes aware, conscious of the act, that he realizes the horror of his condition. Pretty dismal, huh?

And here are we are now, struggling with and against the Internet. We gain a follower on Twitter and we lose one; we measure our achievements in vain against a constant campaign of life updates from our “friends” on Facebook. But like Sisyphus, it is only when we achieve something—Klout score rising, a post or tweet gains traction, buzz occurs—that we become so very aware of the futility and absurdity of the entire exercise. But again, as Sisyphus does, we keep going anyway: posting, tweeting, “connecting” via our digital routines, maintaining a presence, a “brand” of some value to others.

“If this myth is tragic, that is because its hero is conscious. Where would his torture be, indeed, if at every step the hope of succeeding upheld him? The workman of today works every day in his life at the same tasks, and this fate is no less absurd. But it is tragic only at the rare moments when it becomes conscious.”

For Camus’s absurdism, the individual is the most important component of existence. The individual creates meaning from the search for meaning. If Camus were to exist online now, he might see our individual search for meaning expressed through the precise ways in which we curate our digital identities. That is how we search for a self, through branding it into something tangible, routinely possessive.

“Thus I draw from the absurd three consequences, which are my revolt, my freedom, and my passion. By the mere activity of consciousness I transform into a rule of life what was an invitation to death, and I refuse suicide.”

Now, to refuse social media is accept that invitation to death. Our revolt is to reject the call to simplify, our activity of consciousness occurs online. So we remain, posting, scrolling the newsfeed, curating the timeline—our “freedom” inheres in the Internet’s absence of moral proscription, it’s rejection of codes. It is easy for the digital self to become codeless, to be free. Maybe it borders on a kind of apathy, but it is freedom nonetheless.

The act of experiencing life—or what Camus calls “passion”—is the open choice to connect and explore using all the tools (or apps, or devices) within one’s reach. We’ve read much of the doom that underlies the Information Revolution, and of the insidious impact of smartphones and social media on modern life. But is this a revolution of kind, or merely of volume and opportunity? Modern technologies provide the means to uproot and exaggerate what has always been, and perhaps will always be, absurd.

But are we still inherently alone? Despite all our connective technologies it is no easier to walk out your front door and meet someone in the city. One could even argue that the anxiety of loneliness has been augmented by 21st century innovations. I’m inclined to agree and yet, Camus would likely not, would posit no new problems of being. He would accept these innovations, particularly social media, as nothing but another verification of the absurd. The absurd individual, you see, can only understand its place in the universe through the silencing of all that clouds thought.

“All Sisyphus’ silent joy is contained therein. His fate belongs to him. His rock is his thing. Likewise, the absurd man, when he contemplates his torment, silences all the idols. In the universe suddenly restored to its silence, the myriad wondering little voices of the earth rise up. Unconscious, secret calls, invitations from all the faces, they are the necessary reverse and price of victory.”

Perhaps the connectivity of being online provides a temporary solution. It blurs the lines, numbs the senses, shelters us from loneliness. And yet, it could work on the inverse. As made quite clear in “The Myth of Sisyphus,” it depends on the individual. Camus believes that in rejecting hope, rather than despair, the individual becomes that much closer to being free. It’s in the acceptance of the futility of our actions online, even though they may provide both cause (validation, recognition) and value (enriching life via apps, etc.) there will be no change. Activity will continue. Inevitably, our relevancy or level of activity will falter, and eventually change. Camus uses the inevitability of death as cause and reason to eliminate hope. To eliminate hope lets the individual experience fully, without reservation and restriction, the life at hand. I could say the same about our modern condition.

“There is no sun without shadow, and it is essential to know the night.”

The modern online condition is absurd, and yet, like the prevailing human condition, we “connect” to achieve some kind of significance. We may be the one acting out the absurdity in the phone booth, but at least we have access to the phone call. We can choose the phone number, the purpose of the phone call, the conversation, and what we might hope to get out of it. Even if we are not wholly accepting of the online life, it doesn’t mean we are in despair. If we are, indeed, Sisyphus in modern, online form, it’s perhaps as what Camus imagines: “The struggle itself toward the heights is enough to fill a man’s heart. One must imagine Sisyphus happy.” 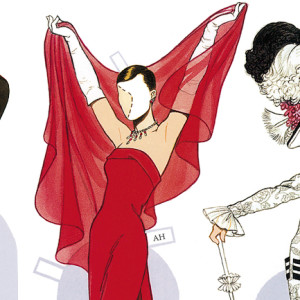 Dover Publications, which is celebrating its 75th anniversary this year, takes paper dolls seriously, as should you.  From...
© LitHub
Back to top