Brandon Taylor on the Greatest Tennis Player Who Ever Lived

It might seem a useless kind of miracle, one of minor importance, but I think it’s like poetry in a way. I don’t mean in that old cliché sense of poetry in motion… or maybe I do mean it in exactly that way, that when we say something is poetry in motion, what we mean is that among the 10,000 outcomes for a possible action, the tumbling toward one immovable fate seems a kind of miracle to us, is a kind of poetic invention.

The first miracle of tennis is the serve. You take the ball into your hand as if it were an offering, and you let your hand swing down, then up, like a pendulum. As your arm goes up, you let the ball roll and rise from your fingertips, leaving you behind, having absorbed the energy of the toss. You track the ball with your eyes, considering its miracle of flight, the way it rises and rises until at last, it stops, turns just so, presents itself to you. When the ball reaches its highest point, it floats there, suspended. Your racquet hand has been swinging too, in opposite but paired motion with the hand that’s tossing the ball. You’ve been sinking too, your knees bending, all of it coordinated, so that when the ball reaches its peak, you’re swinging up to it, catching it just as it pauses, with the racquet. You’re pushing the ball up, not down, that’s important, another trick, up and forward, driving it, turning your arm, rotating into the serve. And the ball shoots away from you to the other person awaiting its flight. There’s magic in this. You hit up to hit down. You push to pull, you drive the ball away from you, though you know it will return.

Serena Williams is the greatest living tennis player. She is perhaps the greatest tennis player to ever play the sport, and she is the foremost saint of this first miracle. Her serve is what she is most known for, her ability to hit with pace and terrifying accuracy. Not only that, but she can deploy an array of serves, a multitude of spins, from the same toss to the same place. It’s like a sudden anaphora. The toss is exactly the same, but at the last moment, she pierces you where you’re most vulnerable, changes some minute, invisible part of her motion.

Serena is at times so self-critical that it affects her game. She has a tendency to get negative about herself. Why did she miss that easy shot? Why did she let her opponent put a ball by her at the net? Why did she just double fault? Why are her steps so slow? You can see it in her body language, a monologue, a fierce and accurate accounting of everything she’s done wrong. She excoriates herself, picks apart all of the flaws and lays them before the court. She is imperfect.

But then, in her moments of greatest need, she turns inward and all of that pain is transmuted into something else, something almost divine. When she’s on the cusp of losing a game or a set or a match, her technique sharpens. Her vision steadies. Her strokes deepen and grow heavy with pace and spin. Serena gains a second sight, begins to see all the hidden angles and dimensions on the court which were inaccessible to her before. She tosses the ball. She rises to meet it. And she strikes an ace so purely that for a moment, you simultaneously don’t know how she did it and knew of course that she would.

If Serena were a white man, people would say that she is her own greatest critic. But Serena is a black woman, and there isn’t anything this country hates more than a black woman.

Once, a coworker said to me that he didn’t like Serena because she seemed arrogant. He said that people always have a difficult time with arrogance, and then he mentioned Tiger Woods and LeBron James as notable examples. Why is it that people have such a difficult time with black people who love themselves? Or, I guess, more directly, I wonder why it is that this country can only justify compensating black people when there remains a sense that the white money paying them feels like a favor which of course is impossible if the black person in question takes what they are due with a sense of self-awareness.

Serena is expected to remain estranged from herself. She is expected to deny herself the knowledge of her miracles, her accomplishments in the face of a world that would rather her apologize for existing. She is expected to suffer graciously, with immense and eternal gratitude. She is called graceless, arrogant, manly, masculine, brutish, an ape, thuggish, ugly, and all manner of other things. Her womanhood is held against her even while it is simultaneously denied to her.

Serena is a hyper-dense core of discourse, generating paradoxes left and right.

People don’t know what to do with her, and so they vilify her, punish her, for speaking out about equal pay, equal rights, against racism and sexism. They won’t let her live her life because her life is extraordinary, and there is nothing more radical than a black woman who loves herself—it’s a miracle really.

She’s not at this year’s US Open, because she’s preparing to have her first child with her fiancé Alexis Ohanian, of digital startup fame, but I’m thinking about her more than ever, what she’s meant to me all these years. It’s been a year in need of miracles. It’s been a year in need of Serena’s ineffable divinity. It’s been a year when I’ve need again and again to return to her incredible victory at this year’s Australian Open, when she burned through the entire tournament without losing a set, while pregnant. It’s been a year, when I’ve needed Serena in all of her ferocity and grace, when I’ve needed her ability to sublimate personal agony and disappointment into something greater. But, it would be foolish to think that black exceptionalism and black sainthood is the solution to America’s white racial imagination.

That idea is predicated on another, more insidious idea, that there is something inherent in blackness which must be transmuted to be made palatable for white people. The solution to America’s white racial imagination—that thing which catapulted Trump to the White House and which burbled and spat up white supremacists from the frothy margins of white America—is to be found in the hearts and minds of white people. The idea of white victimhood is what led to Charlottesville. The illusion of white martyrdom is what led Dylann Roof to murder nine innocent people as they knelt to pray.

White terror builds monuments to itself on land it stole.

We should not have to be saints in order to live—are we just ashes in the mouth of white fear, or are more, better, greater, vaster than that? My life is not the summation of some calculation run in the white racial imagination, and yet, my very real fear, is that white people don’t know this. My very real fear is that when I step outside, that’s what I’m entering, a simulation, a war game of white people versus the rest of us, and they’re just tallying the cost of war, what’s one more casualty? What are white people so afraid of? Why are they so scared?

When I watch Serena play, I think my God, she makes it look easy. But it isn’t easy. She sprints to her right in order to catch a ball just before it leaves the court, she goes into a split, extends her body to its utmost limits and manages, by some stroke of miraculous play, to send the ball up the line or cross-court behind her opponent for a winner. It seems like she meant to do it, like she got her opponent to cooperate in their own unmaking, got them to hit the ball just so at just the right moment so she’d be able to catch up to it but only just barely, to snatch it back from the brink, to take the victory. She clenches her fist, sinks to the ground, staring at the sky. I could never do that. I could never begin to approach her speed or her strength or her coordination, but when I watch her play, it seems possible, seems like I could, if I just tried. That’s the beauty of it, isn’t it? She makes you want to try. She makes you want to move. She is a template for a better, stronger version of yourself. She is, for a moment, an image we might make ourselves after.

I think about young players like Sloane Stephens, Madison Keys, CiCi Bellis, an array of others, I think about how they learned to love tennis by watching Serena, how Serena gave a shape to their hope, to their dreams. I think about how there is another imagination in this country, one which forms around a black woman. I think how much better this country might be if we all tried to make ourselves in their image. Not just Serena, but Cardi B, Rihanna, Michelle Obama, Beyoncé, Roxane Gay, Issa Rae, Janet Mock, Laverne Cox, Venus Williams, Kayla Newman/Peaches Monroe, Bree Newsome, and the host of black women this country has forgotten or refused to name, those women whose bodies laid the foundation for this country which actively seeks to kill their children.

Sometimes, when I’m most afraid, I look up videos of Serena playing. Even if I know the match already or have seen the video before, I give myself over to it the way we fall into familiar prayers or rituals. My favorite passage in the bible is Matthew 6:26:

Look at the birds of the air; they do not sow or reap or store away in barns, and yet your heavenly Father feeds them. Are you not much more valuable than they?

Its beauty is not diminished for having read it before, and its message is not less comforting for having been parsed already. It’s the same as when I watch footage from Serena’s victory over Victoria Azarenka in the 2013 US Open. I know how it will end. I know how it will go, but every time she strikes the ball, it’s a miracle. The unerring grace of it. When I need most to believe in the impossible, I think of that match, Serena, the wind in her hair, her will to change fate. 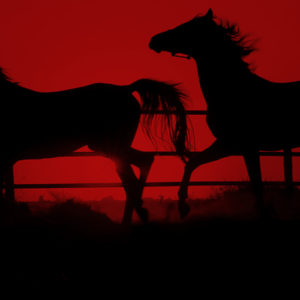 Blood Meridian, widely regarded as Cormac McCarthy’s masterpiece, tells the story of “the kid” (early on “the child,”...
© LitHub
Back to top