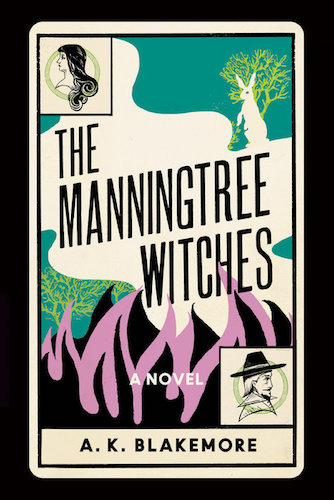 The following is excerpted from A.K. Blakemore’s new novel, The Manningtree Witches, which follows the residents of a small English town in the grip of the seventeenth-century witch trials. Blakemore is the author of two poetry collections: Humbert Summer and Fondue, which was awarded the 2019 Ledbury Forte Prize for Best Second Collection. She has also translated the work of Sichuanese poet Yu Yoyo. Her poetry and prose has appeared in The London Review of Books, Poetry, Poetry Review, and The White Review.

A hill wet with brume of morning, one hawberry bush squalid with browning flowers. I have woken and put on my work dress, which is near enough my only dress, and yet she remains asleep. Jade. Pot-companion. Mother. I stand at the end of her cot and consider her face. A beam of morning light from the window slices over the left cheek. Dark hair spread about the pillow, matted and greasy and greying in places.

There is a smell to my mother, when she is sleeping. It is a complicated, I think, mannish smell. I smelled a like smell when I was sent, as a little girl, to fetch my father away from the Red Lion and to supper. The inn would be clattery with men’s voices and small-beer sour, and my father would be very jolly indeed, sweeping me up and kissing me on my forehead, his coat crisp from the rain in the big fields. Then we would walk from the alehouse back up the Lawford hill together, my tiny hand in his much larger. That was fifteen years ago, Father long dead.

So my mother—who is at present snoring fit to wake the Devil, as they say—and I sleep together, side by side, in this one chamber in the house the fifteen-year-dead man built for us. A house of three rooms, meanly furnished: two beds, one window, plaster blue with mildew. Things being born in the walls, I suspect. I know all the noises of her flesh, and all her complicated, mannish smells. I was in her flesh once, strange to think. Flesh of it, her flesh.

There is a smell to my mother, when she is sleeping.

I force myself to look at her face for a very long time, and to consider it closely. It is so still that at first it might seem like a death-mask, or a statue’s face. But even motionless, it is not so serene as any monument I have ever had the pleasure to see, be it by chapel or church, in Manningtree nor Mistley (not that there are many such images left in Essex at all, now Dowsing and his rooters have done their work, peeling the blithe lead martyrs down off St Mary’s and holding a bonfire for them over on the village green). Even in repose, my mother’s character seems to shape every plane and furrow of that dry face like a maker’s stamp on a horrid little pat of butter. Her Christian name is Anne, but she is called the Beldam West. It suits her, because it sounds wide and wicked; the sound of it is like the name of some dusty place in the book that God might drop big meteors upon. Beldam. Belle is a French word, meaning beautiful (which my mother is not, though they say she was, once). And dam like damned. Over which I suppose it is not my place to speculate.

I take her apart now, while her repose affords me the opportunity, and consider her piece by piece. Her nose is long and set in a crooked shape, having been broken. It was broken at least once, to my knowledge—four years ago, by a most wonderful right hook from Goody Rawbood as the two of them quarrelled in the herb garden on a spring afternoon. I do not remember what the substance of their falling out was, on that occasion, but I do remember the hooting of the men who had gathered at the fence to watch.

I remember the blow was struck. I remember how my mother tottered back into a rosemary bush with a hand clapped over her face, blood streaming sticky between her fingers, and raised a sweet fragrance as she tumbled down onto her cules amid the little blue flowers. I can barely keep myself from laughing aloud when I smell rosemary, to this very day. Goody Rawbood is dead, of course—as people who wrong my mother have a way of ending up. See how the smell and look of her leads me to other things, other places. Or else my understanding of other things and other places comes through the smell and look of her, and that is what it is to have a mother.

My mother’s mouth is the worst thing.

But no more digressions. My mother’s cheeks are hollowed out, the skin stretched over them tight and brown. The unwary blade of sunshine from the window whitens the very fine down on her chin and her temple, and refines the thin lines age has lain at the corners of her eyes and around her mouth, like a cat’s whiskers. Her forehead is pink with sunburn. The skin around her neck is loose, as though those folds are easing into their good fortune at having been spared proximity to the cruel eyes and sharp tongue that so disfavour her among our neighbours; a neck like a fat hog’s wattles, baggy and discoloured and appalling.

My mother’s mouth is the worst thing. She holds her thin lips slightly open as she sleeps, and they are raw and dry at the corners, where a sediment has gathered. Looking in through this red opening you can perceive her mouth’s interior satin, and see how her teeth are stained from chewing tobacco, how the wet root of her tongue jostles, as though she is dreaming a conversation. Or, more likely, a row.

Here is my very unchristian thought: I wish I had something horrible to hand to put into her mouth. I imagine I am lowering a wriggling mouse between her lips by its pink tail, then clamping my hand down over it. Or no. A jar of hot horses’ piss, a fistful of rabbit droppings, blood—pig’s blood—hot from the slice—

My mother’s eyes open, and she says my name, quietly: “Rebecca? Beck?”

She mutters something I do not hear, and presses her hand to her temple. She groans. “Never get old, Rebecca,” she says. “Mind me, girl. I am all filled up with aches and pains before the work of the day is so much as thought of.”

I answer that her aches and pains might have more to do with the Edwards’ small-beer than anticipation of honest labour. She is a very great drinker, and often says that drink does more than God in the way of comforting the poor man (or woman, for that matter, she will add, with a wink of her black eye).

“Mind thy tongue,” she snaps back, wetting up her lips. “And utter not that name in my house,” she adds, sleep-fuddled and haughty in even measure. Utter is the very word she uses, thinking herself Moses.

I imagine I am lowering a wriggling mouse between her lips by its pink tail, then clamping my hand down over it.

I ask her if the name Hobday is still quite well to the ears of God and man. “Because I’ve some linens to take to the Hobdays up the hill.”

Mother has risen from her bed now, and gropes for the chamber-pot. She squats down by the side of the bed and draws her wrinkled smock up over her knees, relieving herself. Her piss is a dark yolk-yellow colour in the mornings after she has been out drinking, and it smells yeasty, causes the whole room to smell yeasty. This is the smell of Friday—and Saturday, too, most usually. When she has finished she shakes herself off with a few jerks of her haunches and clambers back into the cot. Hot little room, the spring sun coming in from the east. Layabout. “Take some milk-pottage for Bess,” she says, yawning. She lowers herself down and draws the coverlet over her breast, closing her eyes again. I wait there at the end of the cot for any further order or imprecation, but none comes.

Vinegar Tom bolts in through the door as it is opened, and leaps up onto Mother’s bed. He mews a dismissal over his shoulder at me, and settles down by the Beldam’s hip to lick the summer night off his fur. She lowers her hand to scratch at him between the ears. “Impudent girl,” my mother murmurs, “thou backwards paw, thou whelk.”

I am very grateful to close the door behind, to shut away the creature that made me.

It is early in the morning. A nice big cream of cloud settles on the horizon. Out in the yard, one of the hens takes a considered step, her head held askew, like a woman in marvellous skirts stopping to check the tread of her boot for a stone.

These are the best short stories to read around a campfire. 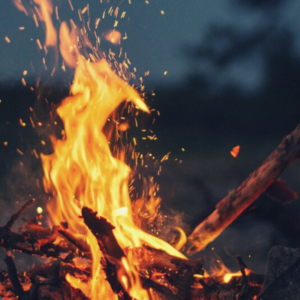 These are the best short stories to read around a campfire. Little-known fact: today, August 10, is National S'mores Day! Oh, how I miss sitting around the campfire. There is no better...
© LitHub
Back to top