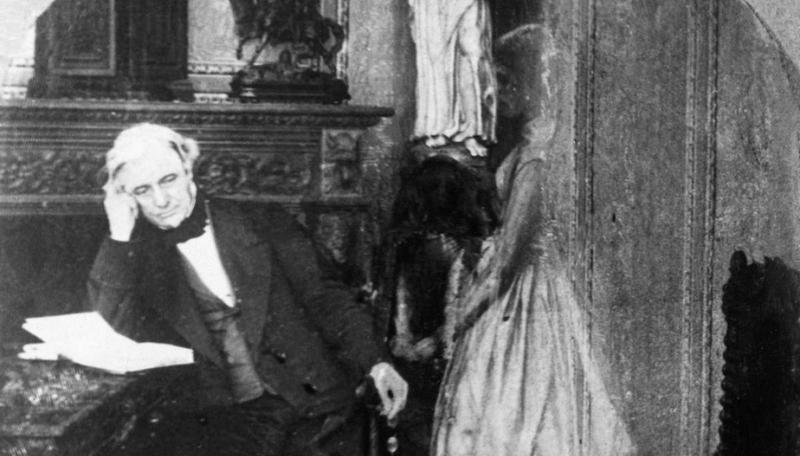 The Man Who Dared Photograph the Dead

On the Case of William Mumler, Ghost Photographer

This much he would admit: William Mumler, late of Boston, recently of 630 Broadway, was guilty of making pictures.

Without question, he had used his camera and an array of potent chemicals to create images for those in need. Also true, in this work he had doubtless served some higher metaphysical purpose. He had frozen moments in time. He had used sunlight and silver to etch captured instants on rectangles of glass, which through some further alchemy of memory and imagination then became windows on love and loss for all who beheld them.

If there was a lawlessness to any of this, it was one to which the hundreds of photographers then working in New York City in 1869 might also have pleaded guilty. His block of Broadway alone was among the most photographed acres on the planet, crowded as it was with tourists who never tired of seeing their own eyes stare up at them from newly varnished photographs, and the practitioners of this relatively new art eager to sell to them.

As for the accusation that he had convinced the gullible that he was able to make images not only of those who visited his studio, but of men, women, and children who had passed on to the next world—well, might it not be said that every photograph of a living person will eventually become a picture of the dead?

To bridge the chasm created by death had been arguably the single greatest change the art and technology of photography had brought to human experience. Just a generation before, a departed loved one’s features began to decay in the mind’s eye of the survivors with the final closing of the coffin lid. For the dead to remain in this world, even if only as a shadow, was to inch closer to immortality. The art had been born of this hope, and inevitably all the great photographers of the day had sought to depict death in ways that reframed the terror of oblivion for the limited comprehension of the living.

Hadn’t the most celebrated image-maker of the age, Mathew Brady, been lauded for displaying the casualties of war on Broadway, mere blocks from where Mumler had committed his supposed crimes? Hadn’t Brady’s Scottish protégé, Alexander Gardner, trailed doomed armies like a carrion eater across the battle-scarred South? And hadn’t Brady’s jealous rival, Jeremiah Gurney, hoped to one-up the master by training his camera on the corpse of Mr. Lincoln himself? Even Samuel Morse, father of both the telegraph and photography in America, acknowledged that his two distance-erasing inventions were born of the same hard fact: that death was the greatest separation of all.

It was not going too far to ask if photography itself might be complicit in this morbid fixation. From its earliest days scarcely thirty years before, it had been called the “black art”—a phrase referring primarily to the silver nitrate stains on a photographer’s hands, but also suggestive of a possible connection to the much older “dark arts” of magic and sorcery.

To make images of any kind was to traffic in the uncanny; to make images of such perfection that they approached the divine was to invite the widespread belief that a camera somehow captured a sliver of its subject’s soul. Every photographer was called upon to become a necromancer now and then.

To Mumler, the great injustice was that he alone had been arrested for making images that held a mirror up to the living and asked them to consider what lay beyond. If the root of his transgression was to be found in the notion that human ingenuity might be harnessed to once again see those who had passed on, why was it not all photography now on trial?

“The history of all pioneers of new truths is relatively the same,” Mumler would later say, “and happy is the man who is not the chosen one to meet the prejudices of a skeptical world in the development of some new discovery.”

Across the city, it had been a week full of consternation over other supposedly new spiritual discoveries. A few days before, at Christ Church in midtown, an Episcopal liturgy had been interrupted when the organist abruptly stopped playing and ran from the choir loft, complaining that “every fibre of his body rebelled” against taking part in worship he had suddenly realized was a “burlesque.” On the same day, at a meeting of Methodists, debate on the question of allowing women to preach nearly brought the congregation to blows. And in Brooklyn, a hundred Spiritualists like those gathered in the courtroom on Mumler’s behalf had met to hear an inspirational lecture on how their beliefs would soon rise to become the country’s dominant creed.

“Spiritualism is the future church,” the speaker had told them. “Its roof will be the stars; its walls the universe; the earth its foundation. Its choir the wild waving sea. Its idea the union of progress, steam, intelligence, and the locomotive; its aim God, Justice, and Immortality.”

These were not beliefs held only by an oddball few. In the aftermath of the Civil War, during which more than three-quarters of a million were killed, the nation exploded with interest in the possibility of making contact with the spirit world.

Though often remembered as a fringe pursuit run by séance-holding hucksters, Spiritualism was a major cultural force. For a time, it seemed it would become one of the most widely held religious perspectives in America. Unlike other fast-growing religions in late-19th-century New York—Catholicism and Judaism—the majority of Spiritualists were neither immigrants nor outsiders, but men and women from moneyed and established East Coast families. Their pedigrees couldn’t protect them from the war and its emotional costs, and so in the war’s wake many American cities became home to a form of spiritual searching as peculiar as it was poignant.

Mumler rarely became so expansive in his proclamations of faith, but he too believed, like the Brooklyn Spiritualist preacher, that the unimaginable transformations of this steam-red, locomotive age would provide mortals with the keys to the life to come. Photography, in his view, offered truths unknown to earlier divine revelations. The images he had created were proof that scripture was now being, as the name of his art proclaimed, written with light.

Unfortunately for Mumler, the prosecutor assigned to his case was having none of this. If he had the authority, he soon told the court, he would put the whole “future church” of Spiritualism on trial, along with the notion that the speeding locomotive of technology could provide any answers to questions of faith.

Once the formal complaints had been entered into the record, the judge looked down at the defendant in his rumpled suit, his unruly beard. This Mumler was perhaps as unlikely a prophet of a new religion as had ever troubled the powers that be. But then, maybe being unlikely, rumpled, and unruly was a requirement of the job.

“What is it you’ve got to say to these charges?” the judge asked.

Though he would often be called “Mumbler” when his story began to find its way into the city’s daily papers, and from there into news published around the world, Mumler spoke clearly enough now to be heard by members of the press spread among the ghostly crowd in the gallery.

In the weeks to come, these same seats would fill with 7 witnesses for the prosecution and defense: eminent photographers and others who knew far more about the “black art” than his accusers ever could; the mayor’s henchmen from Tammany Hall, whose own large-scale corruption made them quick to crack down on penny-ante crooks; the showman P.T. Barnum, who hated all swindles except those he created and controlled; and most important, Mumler’s own satisfied customers, happy to have been given the opportunity to purchase final reminders of dear ones now gone.

“I have nothing to say,” Mumler said.

“Do you pretend,” the judge pressed, “that you take spirit photographs by supernatural means?”

“Have no answer to make to this question either,” Mumler replied. “I demand an examination.”

No doubt the judge thought that even if the defendant might be able to fool the world with his camera tricks, he would not be taken in. Yet despite his desire to dispense quickly with criminals of all kinds, he was intrigued by the figure before him, and likely supposed others would be as well.

“The intensity of the interest manifested by the public in this case,” a reporter from the New York Daily Tribune soon wrote, “has perhaps never been surpassed in reference to any criminal investigation in this city.” Harper’s Weekly agreed: “The case of the people against William H. Mumler is . . . remarkable and without precedent in the annals of criminal jurisprudence . . . and strange as it may seem, there are thousands of people who believe that its development will justify the claims made by the spiritual photographer.”

“The accused does not know and has never pretended to know by what power or process, other than that of producing an ordinary photograph, these spirit photographs are produced,” Mumler’s attorney declared. “There are a great many intelligent men and women who after careful investigation, are firm believers that the pictures are truly likenesses of the spirits of the departed, and every day the number of sitters, investigators, and believers is increasing. He and such believers are of the opinion that the taking of these pictures is a new feature in photography, yet in its infancy surely, but gradually and slowly progressing to greater perfection in the future, requiring for such perfection time and a scientific knowledge of the power that is operating.”

It was a time when rapidly increasing scientific knowledge was regarded not as the enemy of supernatural obsessions, but an encouragement to them. Electricity had given credence to notions of invisible energies operating beyond human comprehension. The telegraph had made communication possible over staggering distances, which raised hopes of receiving messages from the great beyond. Now came Mumler and his camera offering sight beyond sight.

With other cases to get to on this busy Monday morning, the judge instructed officers of the court to hold the spirit photographer in the Tombs until such time as a formal trial might begin. As Mumler was led away to the jailhouse, the gathered Spiritualists dispersed into the streets. Passing by the Egyptian columns and down the granite stairs, the troubled souls floated through Manhattan like mist, as if a vast catacomb beneath the city had creaked open at last.

Peter Manseau is the author of the nonfiction books Vows, Rag and Bone, and One Nation, Under Gods; and the novel Songs for the Butcher's Daughter, a winner of the National Jewish Book Award. He is the first curator of religion at the Smithsonian's National Museum of American History. He lives in Annapolis, Maryland 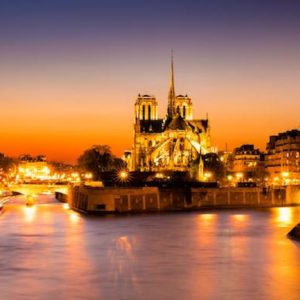 When I came to Paris from London twelve years ago, supposedly for an August weekend break, I never imagined that I would...
© LitHub
Back to top
Loading Comments...