The Little-Known ‘Slow Fire’ That’s Destroying All Our Books

Chloe Vassot on the Relentless, Inevitable Process of Decay

How to fix a book: first, gather your tools. The bone folder that feels familiar in your hand, the knitting needles still sticky with glue, the X-Acto knife, the tiny Tupperware of glue.

Then, diagnose the damage. If there’s scotch tape, grab the lighter fluid. If the book is on its last leg, worn out, prepare to make a box. Check that the guillotine is free.

Sometimes you need to be brutal, eschewing sentimentality as you cut off a spine or replace a book’s old, water-stained cover. At other times, gentle, delicate—especially with the books from Special Collections, those unique, fragile (and expensive) texts. And sometimes you find books with yellowed, stiff pages. The old dog-eared folds break off in triangles, flutter to the floor. These books can’t be helped by simple repairs—they’re acidified, dying, and the opposite of unique. In fact, they’re examples of a large-scale catastrophe that’s been quietly building in libraries for decades.

It’s called a “slow fire,” this continuous acidification and subsequent embrittlement of paper that was created with the seeds of its own ruin in its very fibers. In a 1987 documentary on the subject, the deputy Librarian of Congress William Welsh takes an embrittled, acid-burned book and begins tearing pages out by the handful, crumbling them into shards with an ease reminiscent of stepping on a dried-up insect carcass.

We cannot stop the slow destruction of our collections.

The destruction is inevitable. Depending on how a book was made and how it’s been stored, embrittlement can happen in as little as 30 to 100 years. Already, books have been lost, and the methods of preservation are too limited, time-consuming, and expensive to address the scale of the problem. Mass deacidification, where an alkaline neutralizing agent is introduced via a spray or solution applied to paper, once seemed like the golden solution; but while it can be used to prevent slightly acidified paper from deteriorating, it doesn’t reverse the effects of prior damage. The fallback is digitization—a fancy way to say mass-scanning, and the most used method of saving the content of a text, but not the book itself. In an article about the Library of Congress’ digitization efforts, Kyle Chayka reports that it would take literally decades of scanning to preserve the institution’s over 160 million object collection. At our existing technology’s current scanning pace, preserving the prints and photographs division alone would take about 300 years.

As Ed Vermue, my boss at the tiny college preservation lab where I worked, put it: we cannot stop the slow destruction of our collections. From the mid-19th century until now, we’ve never had more paper, more print materials floating around our world. And there’s about to be a physical hole in the historical record that coincides precisely with the largest creation of printed materials in human history.

The answer to how we got here also has to do with scale—specifically, the increased demand for paper and printed materials that swept the world as printing presses became common and literacy rates rose. In western Europe, from the 16th to mid-19th centuries, paper manufacturing was inherently a recycling industry. Old rags, dead peoples’ bedsheets, even canvas sails—all were collected, sorted, pulped, and turned into the material backbone for paper-making.

Paper demands fiber, and recycling was cheaper and faster than relying on the raw plant materials like flax and hemp to be grown, harvested, and readied for use. But as demand grew, papermakers started eyeing another kind of plant: trees, in all their abundance.

It wasn’t until the 1850s that someone figured out the code: an industrially intense process of pulverization and harsh chemicals that killed the fish in the streams that powered paper mills and, crucially, created highly acidic, weak paper. Think of newsprint, how quickly it disintegrates. For decades, and continuing into the 1970s, the material used to record both the mundane and profound thoughts of generations was just a few grades stronger than that notoriously short-lived medium.

Part of the reason wood-pulp paper is so weak is due to the comparably short strands of its fibers; it creates pages prone to break, and all the acids the paper retains from its production process creates pages that are already always burning up from the inside.

Librarians everywhere are now forced to choose: in the face of inevitable loss, what gets saved?

In the repair lab, one of my favorite fixes was called a hinge. Using beautiful, soft Japanese papers that we cut using just a brushstroke of distilled water, we reattached torn out pages to their text block, reinforcing them with paper that was alkaline and a glue called wheat-paste that was dissolvable, just in case. We called the thinnest versions “ghost paper”—it turned almost entirely translucent when attached to a page, every strand of fiber visible on its fuzzy edges.

In our collective imagination, libraries seem to hold a comforting promise of forever. We like to believe that a book, once written and published and entrusted to these institutions, will stand the test of time, sturdy and reliable. But this is a fallacy. Libraries aren’t hermetically sealed vaults, but living entities, constantly moving and constantly dealing with the natural ebbs and flows in their circulating and more permanent collections. Some books will always be lost, whether to puddles or bad memories, but some will be lost to a creeping disaster that we should have started fighting years ago. Librarians everywhere are now forced to choose: in the face of inevitable loss, what gets saved?

The books and documents that history has deemed valuable, the ones made hundreds of years ago and kept in temperature-controlled vaults, will survive. Partly because of their importance, and partly because so many of them were made in the time before wood-pulp; many 500-year-old books are stronger and in better condition than texts created just a few decades ago.

With cheaply available paper, we lost quality but gained quantity, and it changed the world. The world of literacy spread beyond the elites, enabling new cultures based on the written word. It was a step that shifted written words away from the sole purview of white men, and humanity is better for it. As we choose what physical objects to preserve and what to copy, it’s worth asking whose stories are given precedence; what mundane, daily records of life are we sacrificing, and how do we best protect what we have before it’s gone?

As much as I’d like to believe the repairs I made and books I fixed will last, I know they’ll never survive long enough to satisfy me. But the fire in the library has been burning for a long time—it still matters that we fix what we can.

Chloe Vassot is a writer from Pennsylvania and a current MFA candidate at Emerson College in Boston, where she is the nonfiction editor of Redivider.

Finding a Way to Understand the World on a Basketball Court 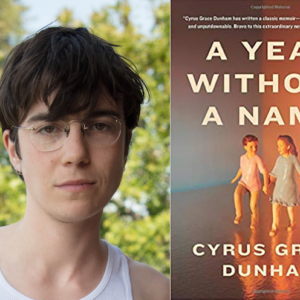 What is gender? It’s a question people seem to be increasingly asking themselves. Cyrus Grace Dunham might question if there...
© LitHub
Back to top