Hermione Hoby on Power, Eros, and the Perfect Timing of 'Cat Person'

In a roiling climate of grievances and exhumed pain, at the end of a dull and lurid year, something astonishing happened. After the unmasking of Weinstein and amid the whole sorry cavalcade of them—powerful men who’d done unconscionable things to people, mostly women, mostly young women—a short story published in the New Yorker went viral. That confluence of words (“short story,” “New Yorker,” “viral”) constituted a sort of absurdity, although one that was salutary rather than disastrous, the latter being the type that had defined American political life since November 2016. Kristen Roupenian’s “Cat Person,” a stunningly calibrated and sophisticated story of a bad date, generated the sort of meme-proliferation more usually associated with a new Beyoncé album. (At the time of writing it is still at the top of the “most read” on the New Yorker’s site, despite being published over a month ago.) It is also, however, a work of fiction, which, like all good works of fiction, is travestied by being reduced to a unit of social media currency.

At its most cursory level, the story is an account of predation and dubious consent, played out largely over text. As such, it was hailed as some kind of dispatch from the zeitgeist. The underlying notion, that literature is in service to the zeitgeist, or even that a story’s value resides in how loudly and righteously it speaks to the prevailing political wind, is a troubling fallacy. The power of that story, as with its forebears—by which I mean precise depictions of imprecise heterosexual relations—was in its fine-tuned ambivalence. This sort of ambivalence is the opposite of a cop-out: it’s generative, rather than reductive, and it comes from time, on the writer’s part, spent dwelling in uncertainty. Though many apparently received the story as an extended version of a #MeToo social media post, unable to grasp it as fiction, it did what the blunt tool of a hashtag cannot: specifically, provoke empathy for both parties.

It’s a subtle oscillation of sympathies that Roupenian enacts: we feel for Margo, a 24-year-old student, who may or may not be attracted to Robert, her slightly overweight, 34-year-old date, and we also feel for him, at least until our sympathy is savagely revoked by the last word of the story. “Cat Person” then, is not about how guys are pigs and younger women are victims, but rather about the curious mechanics and currencies of desire, its necessary deceptions, both mutual and individual.

Margo wills herself into arousal by imagining Robert’s own desire for her. When she mentally tests out the idea of having sex with him—imagination is a prerequisite of action—she thinks: “Probably it would be like that bad kiss, clumsy and excessive, but imagining how excited he would be, how hungry and eager to impress her, she felt a twinge of desire pluck at her belly, as distinct and painful as the snap of an elastic band against her skin.” Does this mean the desire is less hers? Is wanting to be wanted as valid as wanting for oneself?

In its coolly compassionate tone and lucid rendering of sexual confusion, “Cat Person” recalls Sally Rooney’s excellent novel Conversations with Friends, in which 21-year-old Frances has an affair with Nick, a married man in his thirties. Nick is no predator; in fact, his most objectionable quality, his passivity, is also the source of his charm—he’s tentative, subdued. So much so that Frances doubts whether he really wants her, leading her, in turn, to fear and refuse to see how much she wants him. As Alexandra Schwartz noted in her review of the novel, one of the most brilliant features of Rooney’s writing is, “the fierce clarity with which she examines the self-delusion that so often festers alongside presumed self-knowledge.” When Frances tells him,  “We can sleep together if you want, but you should know I’m only doing it ironically,” does she believe herself? Even if she does, the sass is still false, as sass tends to be.

The state of not-knowing is intrinsic to love and sex and it’s also intrinsic in good fiction. Faking it, of course, can operate in the inverse too, not as an attempt to suppress real desire, as Frances does, but as an inability to prevent real desire arising out of something feigned. In Catherine Lacey’s terrifyingly incisive novel The Answers, Mary is a physically unwell young woman, desperate for money to afford a specialist treatment called PAKing. She answers a curious ad promising generous remuneration and finds herself employed by a famous movie actor and his team. Kurt has the sort of untrammeled wealth and solipsism that allows him to orchestrate something called The Girlfriend Experiment, in which all his needs will be met by an array of women paid to perform certain roles. Mary is assigned the role of Emotional Girlfriend. Obedient, if dispassionate, she meets her cues, recites her lines and follows all protocols. Soon, however, “it was unclear to her if she was just impersonating affection, or if this impersonation had changed her from within, synthesized a kind of love in her.” However clearly defined human schema are, their participants are subjective beings, subject, specifically, to uncertainty. Is a synthesized love any less valid, perturbing and painful than a “natural” love?

“Ambivalence is the opposite of a cop-out: it’s generative, rather than reductive, and it comes from time, on the writer’s part, spent dwelling in uncertainty.”

Synthesis takes other, less legible forms. When, in “Cat Person” Margo kisses Robert, she finds herself, “carried away by a fantasy of such pure ego that she could hardly admit even to herself that she was having it. Look at this beautiful girl, she imagined him thinking. She’s so perfect, her body is perfect, everything about her is perfect, she’s only twenty years old, her skin is flawless, I want her so badly, I want her more than I’ve ever wanted anyone else, I want her so bad I might die.” Ego, too, clouds the narrator of Emma Cline’s bewitching The Girls. Russell, the simultaneously charismatic and pathetic Charles Manson-like figure at the center of the novel, coerces teenage Evie into giving him a blowjob moments after she’s been introduced to him. Perhaps a more accurate term is “offered up to him.” Afterwards, she experiences the rest of the night, “as fated, me as the center of a singular drama.” The tepid, flat coke he hands her after coming in her 14-year-old mouth is, “as intoxicating as champagne.” A thing can be both disgusting and delicious, its value not intrinsic, but rather dependent on the person experiencing it. Because then there’s this, the sentence which ends the chapter and the preceding description of Russell’s calculated ways of “breaking down boundaries”: “But maybe the strangest part—I liked it, too.” As Margo notes in “Cat Person”: “humiliation […] was a kind of perverse cousin to arousal.”

The queen of this cousinry is Mary Gaitskill, a writer who knows that being desired so often feels like desire itself. “A Romantic Weekend,” from 1988’s Bad Behavior details, for example, the paradoxes and contingencies of sadomasochism. Like “Cat Person,” it’s a bad date, although the terms are more extreme. The pair are confounded by each other. He tells her that he wants her to drink a lot, he wants, “to make you do things you don’t want to do.” She replies, “But I won’t do anything I don’t want to do. You have to make me want it.” At which he lies on his back, “in silent frustration.”

“Something Nice” is another Gaitskill masterclass in asymmetrical deceptions. Jane is playing at being “Lisette,” while also being Lisette, a sex worker, while one of her clients, Fred, is playing at being in a relationship with her, although whether that “her” is Jane or Lisette is part of the problem. When he tells her, after sex, that, “It was just like a honeymoon” she responds, while “swiping” her lipstick off, (a gesture of sublimated violence, as well as a literal wiping away of artifice) “Oh, it was not.” Then, “Don’t be silly.”

Fantasy is not an exclusively female province, of course. During sex with Robert, the titular cat person, Margo is “moved her through a series of positions with brusque efficiency” and feels herself to be a doll, “a prop for the movie that was playing in his head.” It recalls a passage in Meg Wolitzer’s forthcoming novel, The Female Persuasion, in which another young woman, Greer, is bemused when her sweet and sanguine boyfriend becomes “inexplicably and weirdly chatty” as they begin to have sex:

“Why are you talking like that?” she said, confused.

There is, though, a kind of enlightenment beyond this binary. In Ottessa Moshfegh’s “An Honest Woman” an unattractive older man attempts to seduce his younger neighbor. Moshfegh told the New Yorker that in early drafts of the story the girl (who is just that, unnamed and “the girl” throughout) was “flat, passive,” was, in other words, a victim. “And it bothered me,” Moshfegh said, “that, as a fiction writer, I’d do this cruel and boring thing of flattening her into a non-entity. So I went back and recrafted the girl’s personality in the story. I made her have a private life, a sense of humor, and her own agenda. Brief shifts into her perspective allow readers to look at Jeb from her point of view. While describing the actions of a predator, getting into the mind that creates predatory behavior, it’s easy to objectify the victims; we stop seeing them as individuals. I wanted those flashes into the girl’s perspective to give weight to her realness, so that the reader could feel her vulnerability there in Jeb’s living room, and then be surprised by how she handles herself when he makes his move.”

Sex, as with the rich ambivalence of good literature, is confusing, not always legible. Its currents don’t move in straight lines. Desire is a strange mutual construction, a little like the relationship between reader and writer, two people also engaged in a kind of mutually dependent fantasy. There is, then, a kind of erotics of reading, whatever the fiction’s subject matter. As Anne Carson writes in Eros the Bittersweet, “On the surface of it, the lover wants the beloved. This, of course, is not really the case” since a total union would be a form of annihilation. What is needed, then, is an imagined, godlike self, mighty enough to resist annihilation, even while consumed. Carson praises Sappho’s “tactic of triangulation,” the way in which, “As the planes of vision jump, the actual self and the ideal self and the difference between them connect in one triangle momentarily. The connection is eros. To feel its current pass through her is what the lover wants.” That’s why a reader reads, not for the dull solidity of a he-said/she-said, but for the spark of triangulation.

Neon in Daylight, by Hermione Hoby, is available now from Catapult.

Hermione Hoby is the author of the novel Neon in Daylight, out now with Catapult 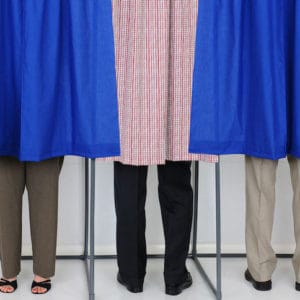 This is a story about 20 million missing people, and the world they would have made and how different it might have been...
© LitHub
Back to top