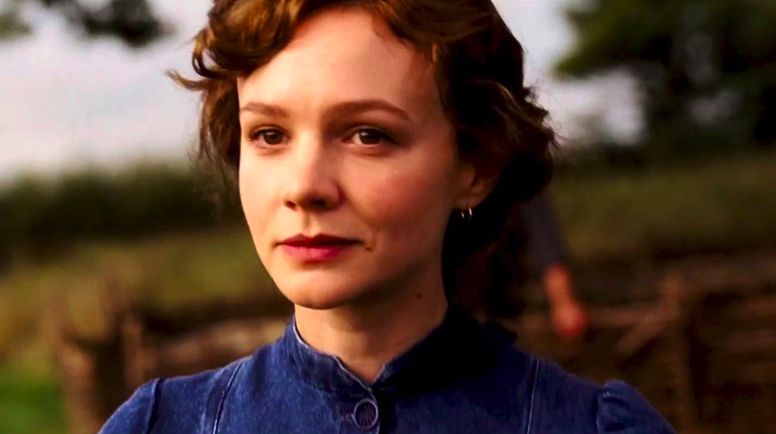 We Get the Movie Adaptations We Deserve (and Want!)

The summer of 2015, and literary adaptations abound: so far there’s been Madame Bovary, Far From the Madding Crowd and Testament of Youth, all films based on classic novels (with female protagonists!). On TV, we have had Wolf Hall, Jonathan Strange and Mr. Norrell and Poldark. Ok these are not “classic” novels, but I’m not going to delete them from my DVR just because the source material was written on a computer instead of parchment. We live in a cinematic world of sequels and adaptations but I won’t bore the reader with another re-hash of the lack of creativity in the film industry.

What I’m interested in are the first films I mentioned, made from classic source material. There are dozens of BBC and feature film adaptations of classic novels that have fallen away, to be replaced by update after update of the same story. Jane Eyre has been filmed at least ten times, Pride and Prejudice more than a dozen, not including retellings and episodes of old anthology shows. We seem to need to re-tell these stories every decade or so. The “material” is the same, the bones are the same. Why do we keep turning up for them?

To begin: A movie from 1969. Women in Love, directed by Ken Russell and written by Larry Kramer, based on D.H. Lawrence’s novel, published in 1920. A meditation on love and relationships in the English countryside. Two images: 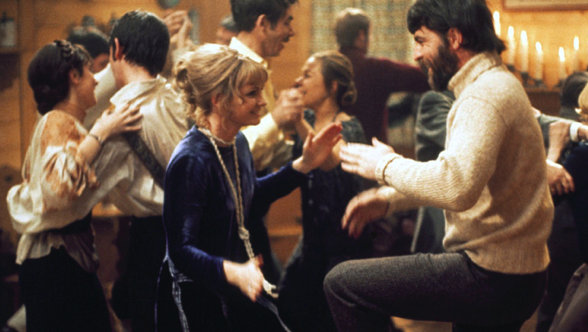 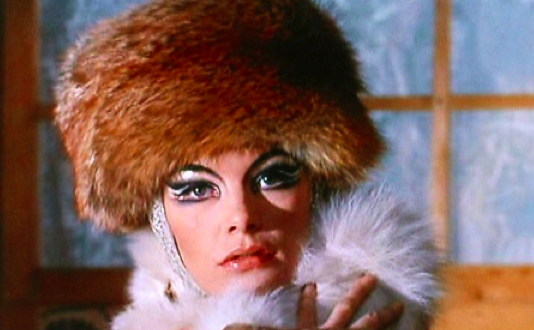 The first image: That. Is. A beehive. A beehive hairstyle, in a movie ostensibly set in 1920. Ursula is unapologetically wearing a beehive. And the second image: Glenda Jackson may as well be in a Mary Quant photoshoot. Women in Love gives off a patchouli-heavy 1960s musk. It may as well have had thigh-high boots and a beachfront dance scene. The novel might have been published in 1920, but the overarching philosophy of the text, with its ambivalence toward marriage and monogamy, and its interest in exploring “free” love (I don’t know how free it was for Gerald, watch the movie), fits better, probably, with the ethos of the 1960s.

We get the book adaptations we deserve. The 1960s gets this heady, confusing, sexy adaptation because that was truest to the spirit of the moment. We need to re-tell these stories over and over because each generation sees them in a different way, needs different things from them. We tell these stories again and again, their survival over time proof of their intrinsic value. People are writing new Zeitgeist-y things all the time of course, but we return to classics because the stories have endured for a reason.

This needs to be said because book-to-movie adaptations are so often decried: It’s too long, it’s too short, it doesn’t capture the “spirit” of the novel. It’s a challenge to transform one art form into another, and it would be ignoring a great deal of effort and thought if we didn’t ask this question. But I think it might be more important to bring a novel to its audience in 2015 than the other way around. 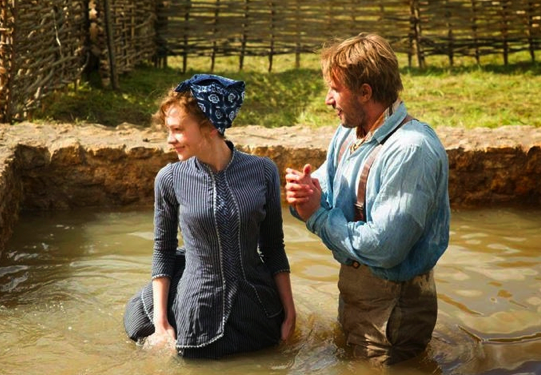 Far From the Madding Crowd, out earlier this summer, with its strong female lead, perfectly beefy lumber-sexual love interest, and achingly beautiful pastoral scenery feeds the needs of the contemporary period-piece lover.

It also follows in the tradition of adaptations being impugned for being “loose” with the material, as Vincent Canby wrote in his 1970 review of Women in Love:

If you think of D.H. Lawrence’s novel, Women in Love, as a kind of metaphysical iceberg, then you can accept the film version, which opened yesterday at the Fine Arts Theater, as a loving, faithful, intelligent, visual representation of that part of the iceberg that can be seen above the water. It looks right, and it sounds right, but you can only guess at its actual dimensions.

Similarly, here is the beginning of David Edelstein’s review for Madding Crowd on Vulture:

It’s difficult to imagine what a person who has never read Thomas Hardy’s Far From the Madding Crowd will make of the new adaptation directed by Thomas Vinterberg. Imagine someone reading a page of the novel to you, skipping two, reading two lines on a third, then jumping four chapters ahead. The connecting material is missing…

And yet. A movie is a movie and a book is a book. I work in a bookstore. I saw Madding Crowd in a raucous trio of friends the night it premiered. It was our Batman vs. Superman. We loved it. The movie is different from the book. There’s a reason Thomas Hardy takes up three of our store shelves (four? he might actually extend to the next aisle, now that I’m picturing it). His Gabriel Oak is a much rounder character; parts of the book are from his perspective and we understand his feelings on a deeper level than in the film. And, of course there is the prose, which is gorgeous and, in certain places hasn’t aged a day in 141 years. The opening of the second chapter, which begins with an extended description of the night sky, is one of the most beautiful passages I’ve ever read. A taste:

The poetry of motion is a phrase much in use, and to enjoy the epic form of that gratification it is necessary to stand on a hill at a small hour of the night, and, having first expanded with a sense of difference from the mass of civilised mankind, who are dreamwrapt and disregardful of all such proceedings at this time, long and quietly watch your stately progress through the stars. After such a nocturnal reconnoitre it is hard to get back to earth, and to believe that the consciousness of such majestic speeding is derived from a tiny human frame.

It’s wonderful writing, and I recommend the book wholeheartedly. But I also put it to you: the filmed version released this year takes the tone and plot of this beautiful creation and brings it to me, and my friends, who crave period dramas and film adaptations, through the lens of the 21st century.

In the book, Bathsheba is the villain. (Ok, that’s a controversial statement, I’m going to get all the Hardy-heads attacking me on twitter.) In the book, Bathsheba faints. She pouts. She cedes the management of her farm almost entirely to Gabriel by the end of the book. I found the voice of the novel blaming Bathsheba, for the tragedy of the climax. She’s kind of a Scarlett O’Hara of the English countryside.

And then in the movie, this is what we get: Carey Mulligan for days. She’s incredible. Her Bathsheba is a flesh-and-blood woman, who works and loves and strains convention, desperate for a full life. She isn’t undercut by the unbridled sexism of the book she’s in. Vinterberg lets her be free and unjudged. This feels sacrilegious, but I think Bathsheba is better understood by this film than by the novel she stepped out of. Just as Ken Russell understood the lackadaisical, heady sexiness of D.H. Lawrence’s creations through the paisley-tinted glasses of the 1960s, we get a Hardy adaptation that is clear and clean and for me, a woman who wants an unapologetic heroine.

Do my friends and I love these movies because we’re millennials living in New York City who also love mason jars and u-pick fruit farms? And why are there so many romance novels set in the Regency period?

I do know that I saw Joe Wright’s Pride and Prejudice when I was 15 and it was a revelation. Two years later, when I asked a boy to the prom and he said no via text message I walked to Circuit City and bought that movie, of all movies, to ease my considerable pain. I’d already read the book but I chose to walk across a busy highway and spend my movie-theater-after-school-job money on a DVD, which I still have, and still watch. Such are the times we live in. These movies speak to us: faithfulness to the book is secondary to movement.

After I saw Madding Crowd, I felt that ache you get when you reach the end of something and you wish you were still watching it, wish you were still living in it. So I went to work the next day and got the book. I read it in one big rush over a vacation. If I still want to be in that world, I could rent the movie version with Julie Christie, from 1967. Not sure I’ll like it as much.

Sky Friedlander is an illustrator and bookseller. 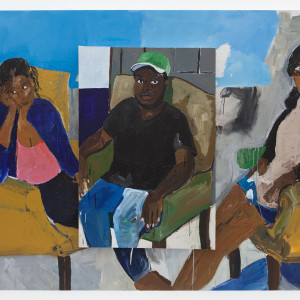 One of the things I've come to know about being in the presence of poetry, the real thing, is how quickly the possibilities...
© LitHub
Back to top
Loading Comments...
Comment
×