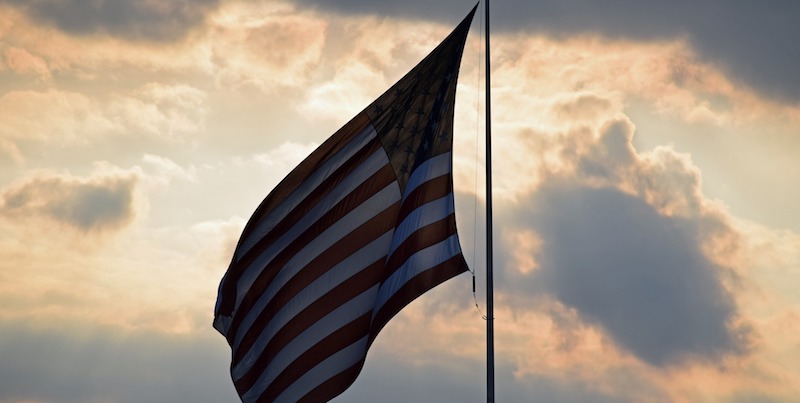 The Limits of Patriotism in Present-Day America

"Patriotism is not a poet's word."

In childhood in the half light
of my door ajar

transforming it into a kind of receiver
or spying device

that tapped my dreams.
So I was afraid

but my father hesitated
to take the picture down explaining

it had to do with saving Europe
after the war.

This is what I understood: my fear
budging against my father’s love

I’ve been reconsidering the word “patriotism.”

Words contain not just their meanings, and sounds, but their histories of use and misuse, their social contexts and cultural capital. Words cast emotional and sometimes political shadows. Word people have extra-sensitive hairs on their heads for picking up these subtleties, but a word like patriotism is so electric with connotation, it can knock down small children.

A simple definition of patriotism is love of one’s country. It may surprise some Americans to learn that citizens of every country in the world feel patriotic. One feature of American patriotism is that we think we invented it.

My relationship with patriotism and America was straightforward and sentimental for much of my life. I was born into a white middle-class family in a western town in the 1960s; it required very little of me to feel patriotic. If I wore red, white, and blue, if I could sing the national anthem, hand on my heart, that was patriotism.

Messages of patriotism were embedded in every church service, school project, Little House book, and Little League game, but it was my father who taught me by example to love our country. I think of the framed photo of General George C. Marshall (“author of the Marshall Plan”) that Dad hung on my nursery wall; of Adlai Stevenson, his political hero; of Ronald Reagan, his nemesis. I think of the 13 gallons of blood Dad donated over his lifetime to the Red Cross, and his Eagle Scout rank, a fact my brothers and I faithfully included in his obituary when he died at age 81. I think of the local ballot measure he chaired (and lost) and the evenings he spent doorbelling and envelope stuffing for his candidates for school board and Congress. Dad and his contemporaries were veterans of World War II and the Korean War; some of his friends bore amputations or metal plates in their heads. They rarely talked of it, but I realize now that war was ever present. I think too of Dad’s career as a scientist at the Hanford Nuclear Site. Nearly every father in my hometown worked in secret to “keep our country safe.” One might argue that last point but miss the larger truth—that my dad and so many other citizens of Richland, Washington, lived their beliefs.

How could James Baldwin, and Frederick Douglass, and Martin Luther King, and Audre Lorde, find the forgiveness to love America?

My father’s example was laudable, but not in any way exceptional. Public service epitomized patriotism in 20th-century America, especially among those who could assume their full citizenship, who trusted without question that their government protected them.

Here is where the word “patriotism” starts to fray, and at two ends. My father’s framed photo of his hero feels quaint and remote to me, like an ancient artifact behind glass. The fight for racial justice has provided me a second, high-powered lens on not just racial history but my personal history: No matter how much I want to believe otherwise, my lessons in patriotism were not typical of all Americans but of a certain privileged class of white Americans.

How could James Baldwin, and Frederick Douglass, and Martin Luther King, and Audre Lorde, find the forgiveness to love America? Baldwin wrote, “I love America more than any other country in the world, and, exactly for this reason, I insist on the right to criticize her perpetually.”

None of us has seen a year like 2020. I pause here. I fear misrepresenting or understating our national turmoil that morphs and magnifies by the hour. If I decry the politicization of masks, I neglect the racial and economic unfairness revealed in Covid-19 outcomes. If I evoke the “Wall of Moms” risking their bodies against militarized federal officers, l pass over Black Lives Matter protestors whose lives are, by virtue of being Black lives, endangered daily. As I frame any statement about my America, I re-remember that its institutions have benefited me and my family at the expense of immigrants, the poor, and people of color. It’s an existential nightmare, but that’s the price of a long, undisturbed sleep.

To me, and to a growing group of Americans in the 21st century, the term patriotism veers dangerously close to nationalism. Why do so many Americans insist that patriotism means only praise? Grand statements fly fast and furious on the floors of Congress: We have the greatest healthcare, the strongest democracy, the most socially mobile society in the world. Is it patriotism to claim a great moral achievement if a quick Google search proves it’s untrue? Couldn’t a house fact checker sound a buzzer at every cheap lie? The game show kind. And maybe an announcer named Johnny could send the contestant home.

I enjoy blaming Ronald Reagan for turning our ship toward a dangerous unsustainable course, and for inviting nationalism into the mainstream. I’d call “Morning in America” a work of fiendish cynicism, except I think he and his idolizers believed it all. So I’ll call it a work of breathtaking myopia and—our national sin—wishful thinking.

I know that patriotism is meant to rise above politics. But how, truly, can that be so? If a president is dangerous to our democracy, if he denies the expert opinion of government scientists and medical professionals and claims out of peevishness or short attention span that the raging pandemic will just disappear, how many citizens must die before his blasphemy is called out by his administration? If the president attacks and seizes our citizens using federal agents in generic uniforms in unmarked vans, without warrants or the permission of mayors and governors, what will it take for his party to break with him?  Who is the patriot here? The president, who claims middle-aged unarmed women linking arms against police assault “hate our country?”

Patriotism is not a poet’s word. It’s anathema to poetry.

Saying “patriotism” out loud, with conviction and without hedging, leaves a sulfurous smell in my head. But I am fascinated by it—by my own. To avoid the mental shock, I’ve taken to calling it “love of country,” which sounds to me greener, with a rolling, thousand-acre landscape. It is a little easier to own.

I heard Monica Youn, a poet, address on a stage her own troubled feelings for America, at one point saying, “I am patriotic. I love my country. For god’s sake, I studied constitutional law!” I crackled at the word said aloud, without apology. She imbued the word with a complicated, thinking-person’s heartbreak.

But patriotism is not a poet’s word. It’s anathema to poetry. I know I called the word electric, and in conversation, jury boxes and voting booths, it is. But in a poem it suddenly goes fat and watery like a syrupy grocery store grape, not anything like the Concords along the back fence of childhood—twilight blue and sweet, with seeds.

For good or ill, I’ve been moved to write poems about America. First, about my hometown where the first nuclear reactors in the world were built to produce plutonium, resulting in the most contaminated waste site in our hemisphere. Those poems became the collection Plume. Gradually, my attention has shifted to my love of country—the P word, the word I can’t say. These are the poems in Post Romantic, written after my naively romantic affair with America hit the skids, when the difficult and, let it be said, essential work of marriage, I mean citizenship, remains.

After September 11, 2001, Americans were encouraged to spend, spend, spend—a kind of market patriotism that contradicted all the old wisdom of saving in wartime and depression. Weeks after the tragedy, George W. Bush exhorted us to “get down to Disney World in Florida.” “We cannot let the terrorists achieve their objective of frightening our nation to the point we don’t conduct business, where people don’t shop.” It was such an easy kind of “patriotism,” not patriotism at all—treating ourselves, while other people’s children fought two distant, endless wars. Is that when we started to congratulate ourselves for buying houses that were too expensive for our incomes? To fill our closets with more clothes than we had ever owned, made in sweatshops on the other side of the globe? Maybe we were already weak, not yet recovered patriotically from hanging chads, Electoral College anachronisms, and Supreme Court decisions down predictable ideological divides. Maybe spending dulled the ache of re-watching our citizens jumping out of skyscraper windows, again and again, and firefighters sifting through steaming rubble for treasure I cannot bear to think of even now.

The news was always on in my recollected childhood, narrating a world I couldn’t yet understand. Solemn voices calling the young soldiers shipped off to Vietnam patriots when they came home damaged, or dead. Calling the president and congressmen patriots who sent them and in too many cases abandoned them on their return. I don’t recall antiwar protestors or civil rights marchers called patriotic. Shouting voices called them hippies, rioters, faggots, n____s. I watched, barely comprehending, as police aimed fire hoses on peaceful men, women, and children. I soaked up images of student protestors, fallen to their knees, cradling the heads of their dying classmates and compatriots.

My phone vibrates every five to ten minutes with another threatening headline. I scan several times a day for encroachments on protestors’ civil liberties, on the silencing of scientists and doctors and the CDC. I don’t fool myself that this act of paying attention is patriotism, it isn’t even healthy. I sacrifice my work and the small homebound pleasures that mark my days.

The patriots are among us though. Ordinary women stand up to fascism on my little screen. They look like me. They’re shielded in turn by their youthful counterparts as the flash bombs and teargas fire. They act, stand firm in the crash and bang and smoke, while I as yet still watch, still measure my fear, but consider. 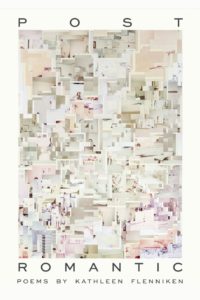 Post Romantic by Kathleen Flenniken is available via University of Washington Press.

Kathleen Flenniken won the Washington State Book Award for her poetry collection Plume. Her first book, Famous, won the Prairie Schooner Book Prize in Poetry and was named a Notable Book by the American Library Association. Flenniken’s other awards include a Pushcart Prize and fellowships from the National Endowment for the Arts and Artist Trust. She served as Washington State Poet Laureate from 2012 to 2014.

On Mark Zuckerberg's Pandering Relationship
to the Right 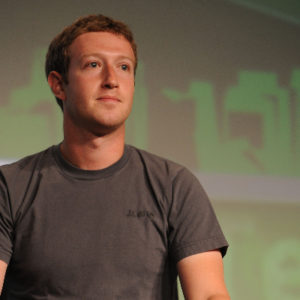 On Mark Zuckerberg's Pandering Relationship
to the Right