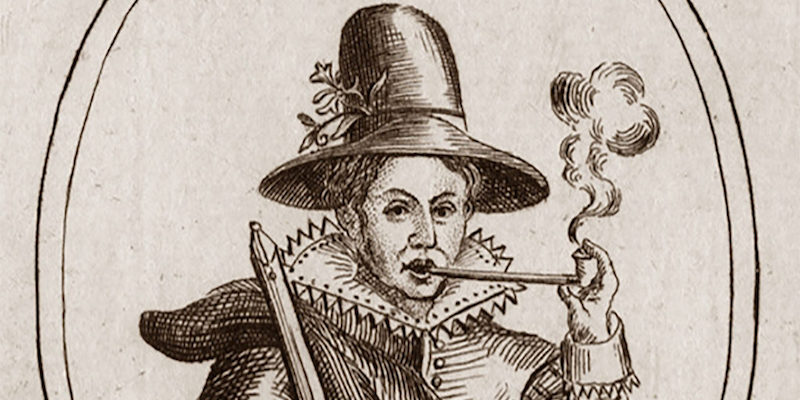 The Liberating and Sexual Potential of Gender Nonconformity, circa 1611

Kit Heyam on the Exploits and Influence of Moll Cutpurse

On Christmas Day 1611, the liberating and sexual potential of gender nonconformity was displayed in an unexpected venue. Evening had fallen over London, and the nave of St Paul’s Cathedral was crowded. The old Gothic-style building (this was fifty-five years before it was to burn down and be replaced by the neoclassical building we know today) was always busy—the nave was used as a meeting place and marketplace, as well as a place of worship—but on Christmas evening it was busier than ever.

Huddled together in retreat from the cold, dark streets outside, the St Paul’s congregation was a captive audience for the person who stood concealed in one of the cathedral’s high galleries, wearing a skirt and a man’s cloak. Before the eyes of all who gathered there, the figure raised their skirts to reveal their legs—not bare, but, as the arrest records later recorded, with their “petticoat tucked up… in the fashion of a man.”

The St Paul’s “flasher,” who was quickly arrested, was something of a celebrity in early-seventeenth-century London—and the scandalous display of leg, far from causing their downfall, helped to cement their personal brand. The exploits of Moll Cutpurse, or Mary Frith, gripped the gossips of London. Frith used gender nonconformity to facilitate petty crime, and embraced the freedom it brought to walk alone through the streets of London, to drink and to smoke; but they also knowingly manipulated the sex appeal it carried.

Their self-exposure at St Paul’s was calculated to excite onlookers—the tucked-up petticoat resembled breeches and revealed Moll’s shapely legs—without actually baring any flesh; in fact, this technique may well have reminded Londoners of the association between breeches and sex work. Frith also performed at London’s second-biggest playhouse, the Fortune, probably in a variety show following a play; the performance records suggest that it was a kind of smutty musical stand-up in masculine dress, “with a sword by [their] side and a lute in [their] lap.” The lute, an instrument held between the musician’s legs, was sexually suggestive enough, but Frith played on this further, telling the audience that while they might think they were watching a man on stage, if they came to Frith’s lodgings “they should find that she is a woman.”

Before the eyes of all who gathered there, the figure raised their skirts to reveal their legs—not bare, but, as the arrest records later recorded, with their “petticoat tucked up… in the fashion of a man.”

Frith’s celebrity influenced at least three plays: John Day’s Mad Pranks of Merry Mall of the Bankside (1610), which has since been lost; Nathan Field’s Amends for Ladies (acted 1610-11); and Thomas Dekker and Thomas Middleton’s The Roaring Girl (first printed in 1611, but probably written earlier). Dekker and Middleton’s play casts a fascinating light on how the people of early modern England perceived gender nonconformity. The character of Frith, known alternately as Moll and as Captain Jack, is talked about at length before we meet them, and it’s immediately clear that they defy gendered categorization.

They’re described as “A creature… nature hath brought forth / To mock the sex of woman”; “a thing/ One knows not how to name”; someone whose “birth began / Ere she was all made”; “woman more than man, / Man more than woman”; someone who, in the sun, has “two shadows to one shape”; and several more. When the actor playing Frith finally enters the stage in the second act, wearing a gender-nonconforming outfit of a masculine “frieze jerkin” and a feminine “black safeguard” (practical over-skirt), their celebrity status is immediately apparent: characters stop talking and turn to them in the street, calling “Moll, Moll, pist Moll,” and they bat off the admirers, saying coolly, “I cannot stay.” Their gender nonconformity facilitates social freedom and attracts a gang of followers—including a character with possibly the best name in all of early modern literature, Sir Beauteous Ganymede, whose name roughly translates in modern queer language as “pretty bottom”—but it also leads the play’s villain, Laxton, to assume that they’re an easy sexual conquest.

The play allows Moll/Jack to assert their honor and virtue: they agree to Laxton’s suggestion that they “be merry and lie together,” then surprise him by challenging him to a duel, which they win. But it never lets the audience forget that their character is sexualized, as a conversation with a tailor about the way Moll/Jack’s breeches stand “stiff between the legs” makes clear. Importantly, though, even throughout this sexualization, Moll/Jack is never straightforwardly understood as female. The tailor is, ostensibly, explaining to Moll/Jack that if they want “Dutch slops”—fashionable, baggy breeches—they will need more fabric:

Tailor
Your breeches then will take up a yard more.

Moll
Well pray look it be put in then.

Tailor
It shall stand round and full I warrant you.

Tailor
I know my fault now, t’ other was somewhat stiff between the legs, I’ll make these open enough I warrant you.

Alexander
Here’s good gear towards, I have brought up my son to marry a Dutch slop, and a French doublet, a codpiece daughter.

On one level, the conversation here is about fabric. The tailor will need a yard more fabric to make baggy breeches; the extra fabric will stick out quite a lot, but the tailor will take care to make the breeches loose and open rather than stiff ; and Sir Alexander, a concealed observer who is worried that his son wants to marry Moll/Jack, is outraged to hear details of their gender nonconformity. But on another level, the conversation is about penises. “Yard” is an early modern term for penis, and the subsequent commands to “put it in,” and references to something that “stands round and full” and is “stiff between the legs” continue this innuendo.

Yet even the penis jokes work on two levels. When Moll/Jack says “put it in,” the audience understands them both as a sexualized woman who could be penetrated by a penis, and as someone who is aspiring to have a penis, crafted for them along with their breeches. A “codpiece daughter,” meanwhile, might simply be a gender-nonconforming woman—a daughter who wears a codpiece—but might also, given the preceding innuendos, be a daughter who needs to wear a codpiece because of the penis that comes along with their gender-nonconforming dress. Underlying all of these jokes is the additional gendered confusion caused by the fact that no women could act on the English stage in the early seventeenth century—so Moll/Jack is a gender-nonconforming AFAB character being played by an AMAB actor.

The narrative of The Roaring Girl may be fictional, but its depiction of Moll/Jack provides a powerful insight into how early modern people understood gender-nonconforming dress as reshaping gender—as well as hinting at what the real Frith’s gendered experience was like. 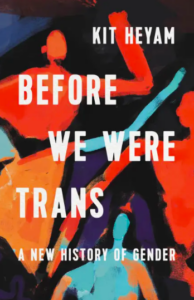 Excerpted from BEFORE WE WERE TRANS: A New History of Gender. Copyright © 2022. Available from Seal Press, an imprint of Perseus Books, a division of PBG Publishing, LLC, a subsidiary of Hachette Book Group, Inc.

Kit Heyam is a university lecturer, a queer history activist, and a trans awareness trainer who has worked with organizations across the United Kingdom. They live in Leeds, UK, with their partner Alex. 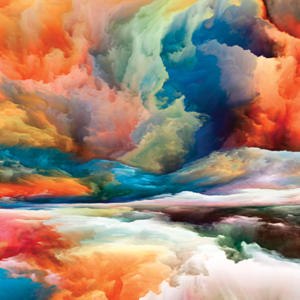 Once upon a Black Imagination... There was a whole city where our men could just cry. Men (trans men are men) from everywhere...
© LitHub
Back to top
Loading Comments...