What Happens When Kent Haruf Calls

In Honor of a Great Writer and Mentor

The great American novelist Kent Haruf never set out to be my mentor, and I wasn’t officially looking for one. We had met at a few writing conferences, where we were both speakers (he was always the keynote, and I was the young newbie), and I was taken by his grace and sparkly eyes and wit, but I kept a shy distance. We really met on the day he called me at home. This was, for me, as startling a call as one can imagine; for some it would be akin to getting a call from Robert Redford, for others, the King of England. For me, in my bookish world, a call from Kent made me inhale so deeply that I choked on the spit in the back of my throat and we both had to wait for my spasm to stop before he could speak again. While I was coughing, I stared at the paper—just that morning, a review of my second novel had just come out, and it had nice things to say about my book, and also noted that “Laura Pritchett was brave to go into Kent Haruf’s territory,” or some such thing, meaning that my novel, like his, was set in a rural town on the eastern plains of Colorado—though I’d conceived the novel long before I knew of his work, and I’d set it there out of personal experience. “This is Kent Haruf,” he repeated, after I settled down. “I want you to know one thing, which is this: I’m perfectly happy to share the eastern plains with you.”

I burst out laughing, and so did he. With that call, an acquaintance moved to friendship. He had, in fact, “blurbed” that novel for me—when one author says something nice about another author’s book—and so he knew of my novel, knew its setting, knew that we had similar aesthetics, knew that that call would make me laugh. Imagine, two novelists sharing the same part of the country! We spoke of how we both loved that land and its details and its people, and he insisted that he hadn’t homesteaded it for his literary own.

From that call came old-fashioned letter correspondence—he asked after my teaching jobs and my kids, and I asked after his writing and his kids. We met at other conferences. We traded stories of writing and of writers. We had the occasional beer. But it remained a friendship until I became desperate. I was working on a new novel and it had pushed every writing boundary I knew. It was told from the point of view of a man with Alzheimer’s, and I simply needed to talk though some craft decisions. I called him and said that I’d be driving through his part of the state and wondered if we could meet for coffee. I hesitated, then, because as a writer myself, I know how exhausting and irritating it can be when people want you to read their books—there are a lot of writers, and a lot of drafts, and lots of great manuscripts out there—but in my pause, he said, “Well, sure, but mail it to me first.”

I bowed my head in gratitude, I sent him the manuscript, and I met him at a coffeeshop in the mountains of southern Colorado. We sat over an iced tea and talked for a long time. He gently offered advice: Keep my novel short and bright, because no one can have a book narrated by someone with dementia for too long. Keep the grandkids present but peripheral: this was Ben and Renny’s story. Cut the last part, it wasn’t the right ending. Keep going, despite the rejections. Also keep going, because, as he said, “In the end, what else are you going to do? The calling is inside you.”

Last fall, I went to go see him one more time. I knew he was ill and there were some things I needed to tell him before he passed. We met at his house, his wife Cathy having left a note that said “1 hour!” on the door. I tucked my feet under me and curled up on the couch, next to him, so we could hold hands. He was hooked up to oxygen, a much thinner man. But oh, he was still Kent. Gracious and kind and funny. A house filled with books, a twinkle in his eye. One of his greatest joys, he said, was that he’d finished his last novel just in time, and now he could sit and look at the little variations of the view outside, which he would never tire of. Indeed, the view across from him was stunning—a happily dancing tree, the snow-capped mountains in the distance.

I told him what I had gone there to tell him. That to my mind, he was one of this country’s greatest novelists, and that even though he was a superstar in New York and Europe, he was also a superstar with first generation students in Greeley, Colorado, where I taught, and where the young kids from rural towns finally felt seen and found. And more, that he was a star to me. A guiding star, a mentor, and it all started with his call, and that I’d simply wanted to tell him that. He squeezed my hand and I put my head gently on his shoulder.

I have ordered his last novel, Our Souls at Night, and yesterday, I held the first hardcopy of mine in my hand and ran my finger over the back smooth cover, where his words would have been. He’d promised to blurb this one too, but he was ill by the time I had a solid draft. I missed seeing his name on the cover, not because of any readers or respect his name would have brought me. Only because it was the mark of a friend. Only because I think he would have liked the book, it too being set in eastern Colorado, right in his home territory, the territory that “he was willing to share.” 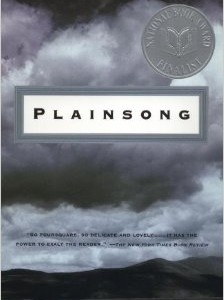 Maggie Jones drove out to the McPherons’ on a cold Saturday afternoon. Seventeen miles southeast of Holt. Beside the blacktop...
© LitHub
Back to top