The Joys of Designing a Debut Writer’s Book

Sarahmay Wilkinson on Creating the Cover for Half Gods

One of the great pleasures and honors of designing book covers is being one of the first people to read an author’s manuscript. This is particularly special when it happens to be a debut work, like Akil Kumarasamy’s Half Gods. I distinctly remember rolling through the last few pages and thinking “WOW! Such talent . . . so young!” What a privilege it is to spend my days absorbing the treasures of another artist’s labor.

As I myself am a young(ish) female immigrant from Ireland via Canada, and now residing in New York, I felt an immediate connection to both the author and the characters she conjures. Half Gods is a collection of interconnected short stories, weaving together the old and the young, images of the homeland and the “promised” land. Kumarasamy moves from past to present, as well as from Sri Lanka to the United States, accounting for the relocation of family. The later generations’ immigrant tales take place in New Jersey and Kentucky. Clearly, there is a lot happening. And in all of this, there is a good amount of discomfort, tragedy, and pain—a kind of pain that seems inherent to the dichotomies, or halves, explored in the narrative.

Once I had completed my reading, I met with FSG editor Eric Chinski. An absolute pleasure to work with, he has total trust in the art department, providing limited but precise guidance. In the case of Half Gods, he left me with the following takeaway: as this was Kumarasamy’s debut, the cover should capture the newness and the strength of a distinct contemporary female voice while staying away from specific ethnic treatments or styles. To me, this meant stay away from things that felt too much like The Interpreter of Maladies and consider heading more towards The Lowland.

I always begin by reading, circling and sketching along the way. I often finish a manuscript with two dozen or so sketches, scribbled and tucked in the margins. From my sketches I then choose five (or so) of my favorite concepts. At this point I begin doing visual research in books, magazines, online, OR I hop on the computer and start collecting typefaces. I like to dive into working right away. For me, work begets work. The most important thing is to keep moving. Produce, produce, produce. And, to be frank, that means there is going to be a lot of rubbish along the way. Rubbish is fine by me as long as it doesn’t deter or depress me. Onward! Upward! Always! I want to be exhausted and spoiled for choice when the day is done. Worst case scenario: I have some meh-to-decent things that I made from scratch, with my very own brain and hands—seems good enough for me. 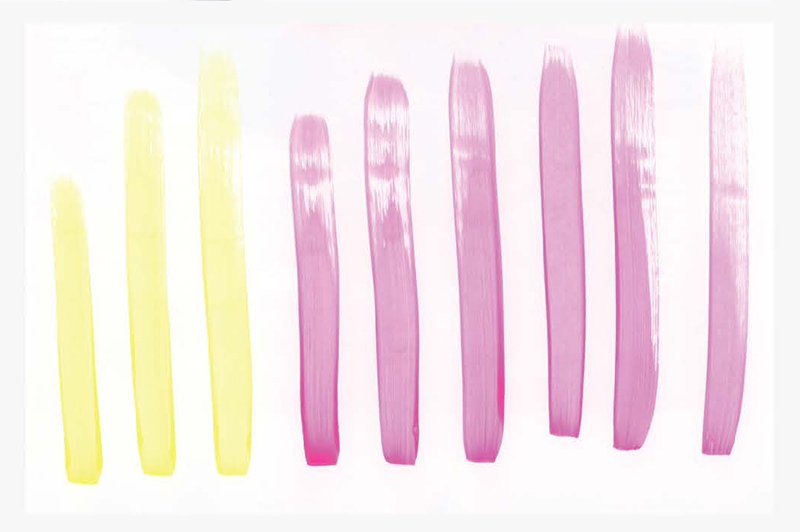 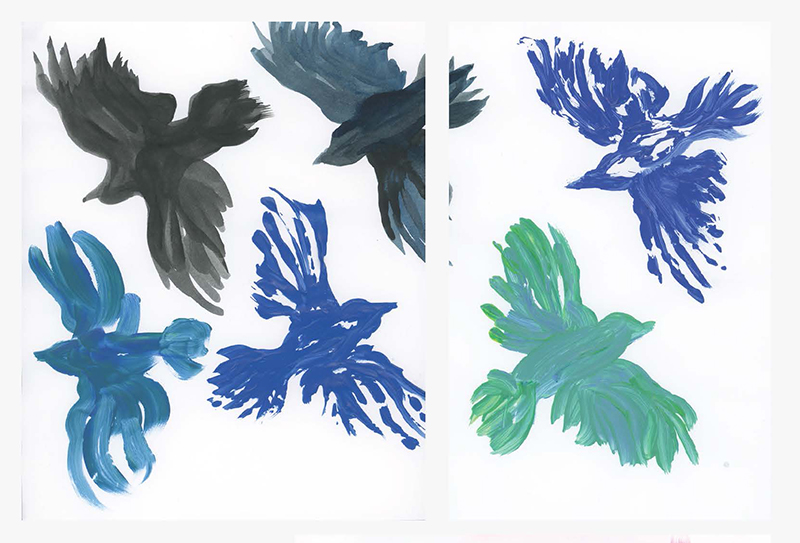 In the case of Half Gods, once I wrapped up reading, and had met with Eric Chinski, I immediately knew the visual reference I wanted to use. I had found this type specimen a while back and I just needed to dig through my drawers to find it. 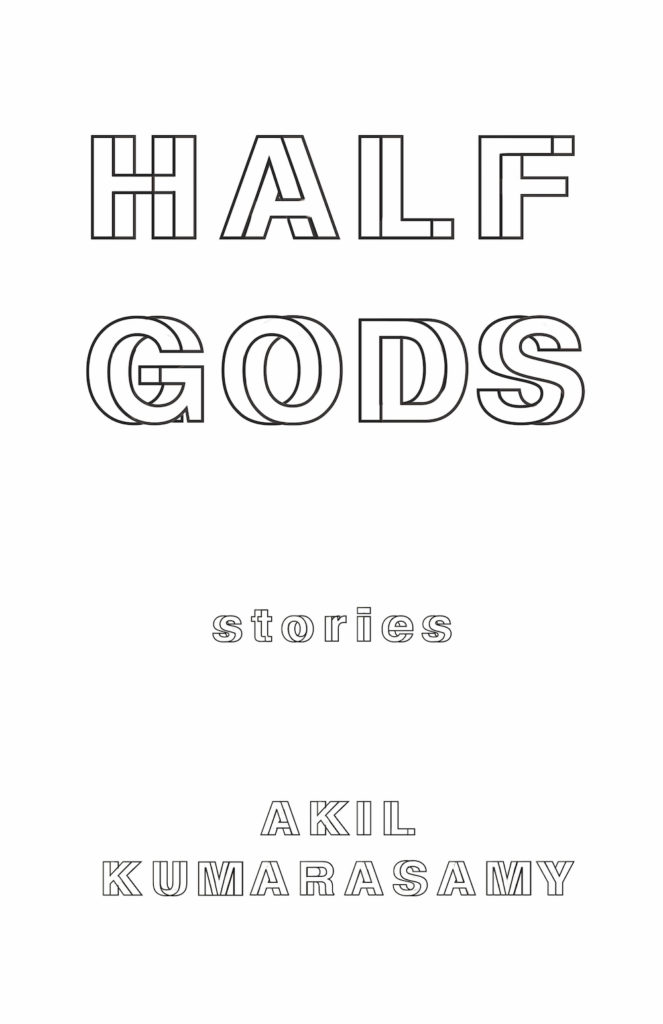 There’s something about these letterforms—which initially appear to be halves but, upon closer inspection, are actually interconnected wholes—that felt really right for Kumarasamy’s collection. 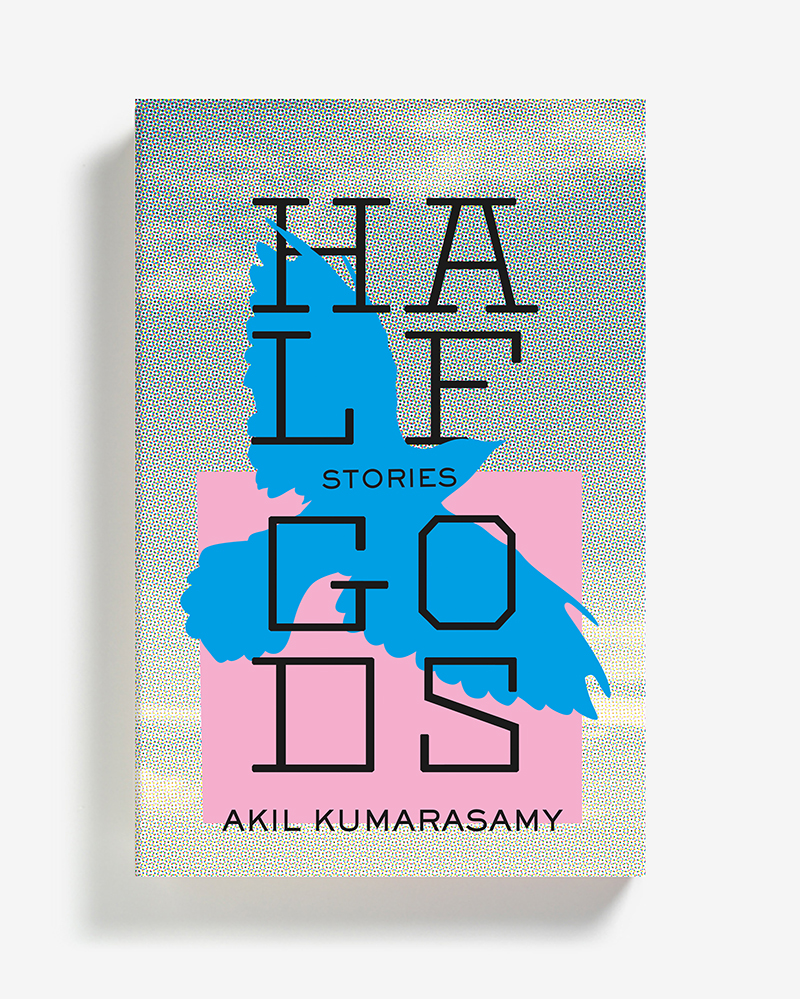 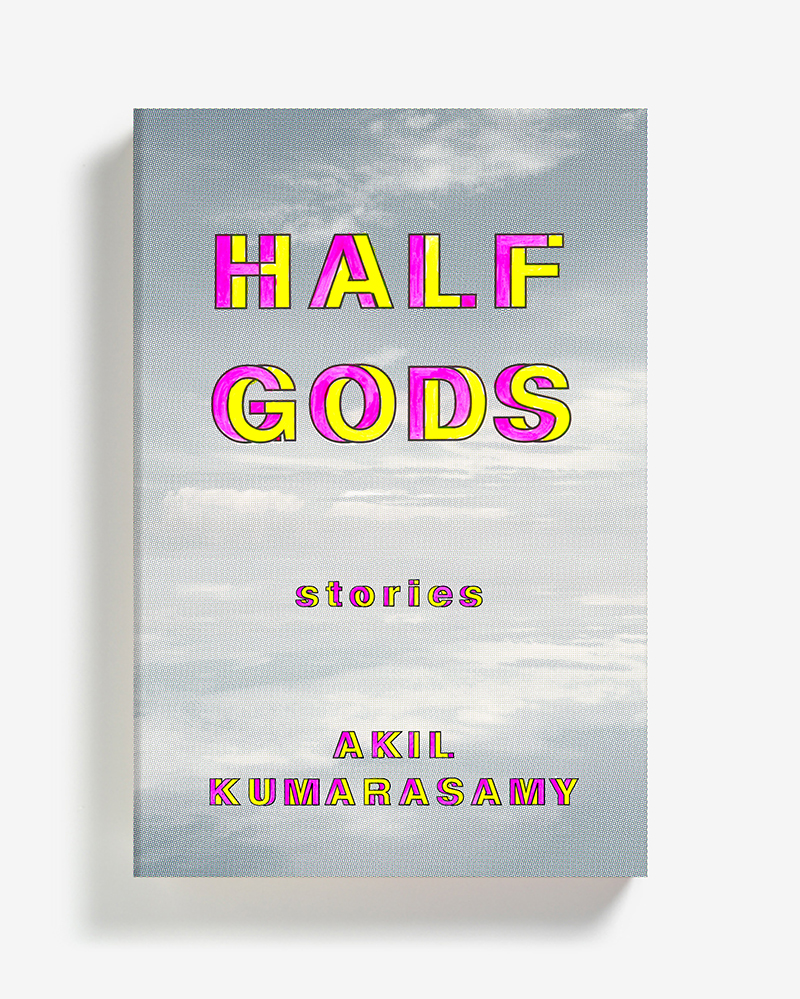 I explored an alternate direction using wings, feathers, and birds, a recurring theme throughout the work. 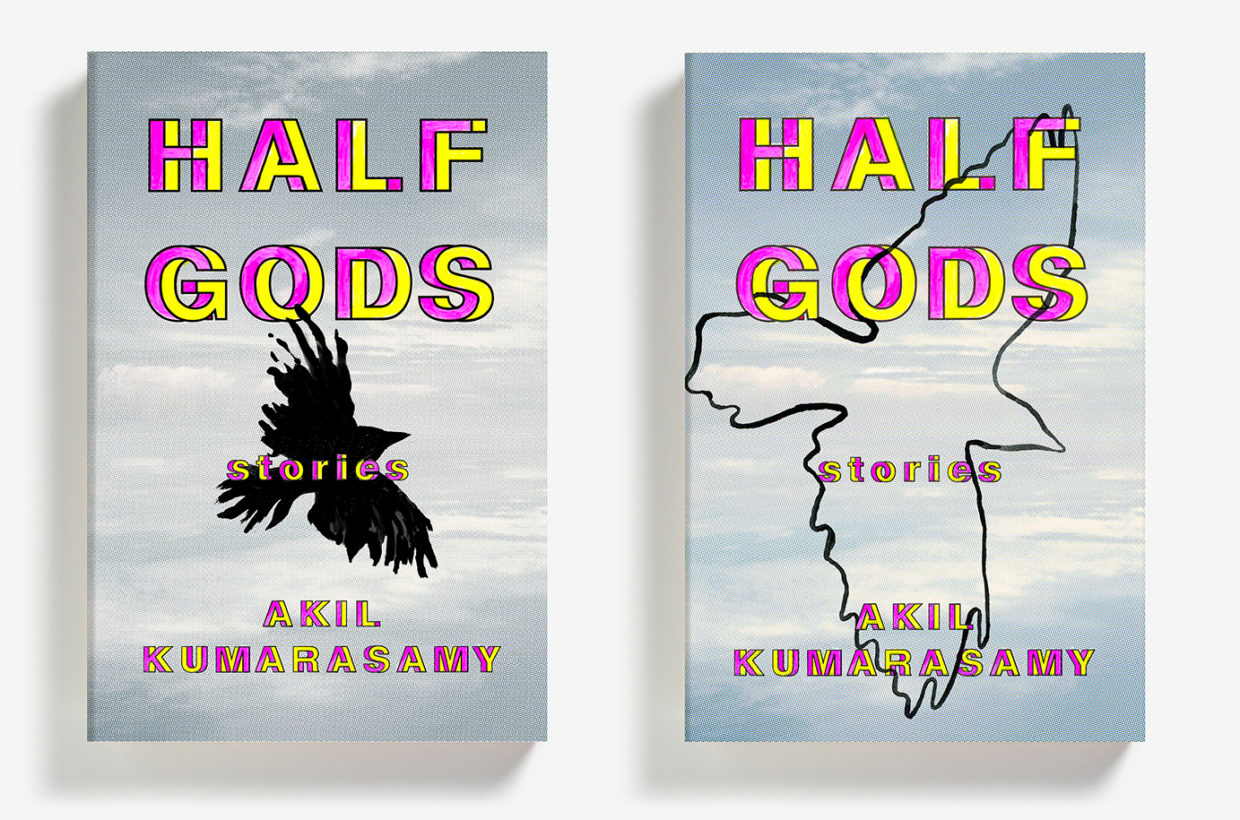 What we ended up with was a kind of marriage of these two directions—not an uncommon happening in the book cover world. With some constructive direction from art director Rodrigo Corral, colleague Alex Merto, and Eric Chinski, I was able to bring the various elements together in what, ultimately, the author happily approved as the cover of her upcoming collection. What a treat! What a gig!

Since its release in June, Half Gods has garnered much deserved attention and praise. Akil Kumarasamy is certainly one to watch and read. I know I will be following her for years to come.

I also think it would also be remiss not to mention the timely nature of Kumarasamy’s focus on immigration, and its lasting affects on individuals and families. We are currently facing an immigration crisis in the United States, as well as various refugee crises throughout the world. The lack of proper policy development and management of these issues is frightening. With climate change alone, we stand to face unprecedented mass migrations and relocation. It is quite possible that many more will come to share this experience of immigrant or, worse, refugee. 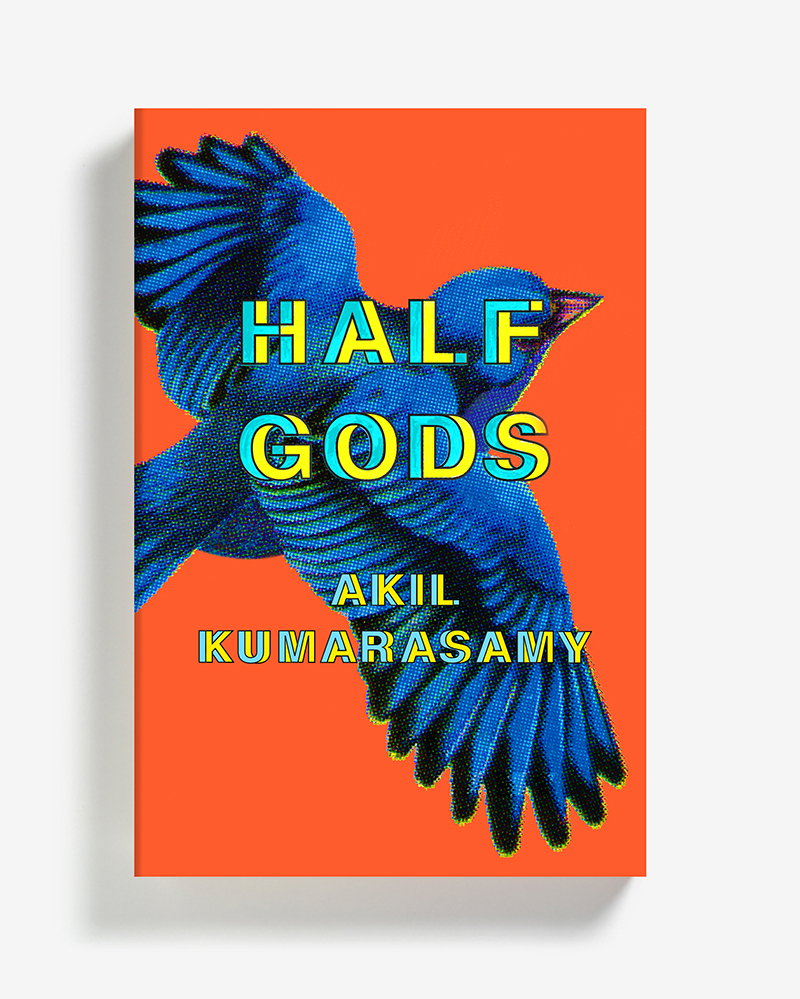 Sarahmay Wilkinson is currently an associate art director at W.W. Norton Publishers in New York City, working alongside Ingsu Liu and Steve Attardo. Sarahmay got her start in book covers at Farrar, Straus and Giroux in 2015 working with Rodrigo Corral. Prior to FSG she worked in the beauty industry for ten years; developing branding systems, designing packaging and concepting ad campaigns. Sarahmay very much enjoys wrapping things in pretty, and/or appropriate packages. When not scribbling away at Norton, you can find her at her studio in Greenpoint, Brooklyn—with her dog Frank. Check out her work at sarahmaywilkinson.com or on instagram @sarahmay.wilkinson
http://sarahmaywilkinson.com 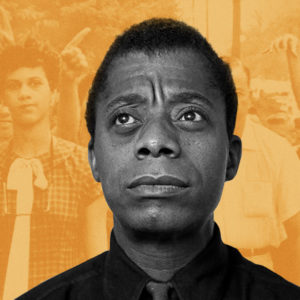 In part one of “Beyond Simplicity,” (which originally appeared in Brick 101), Ed Pavlić explored the complex motivations...
© LitHub
Back to top
Loading Comments...