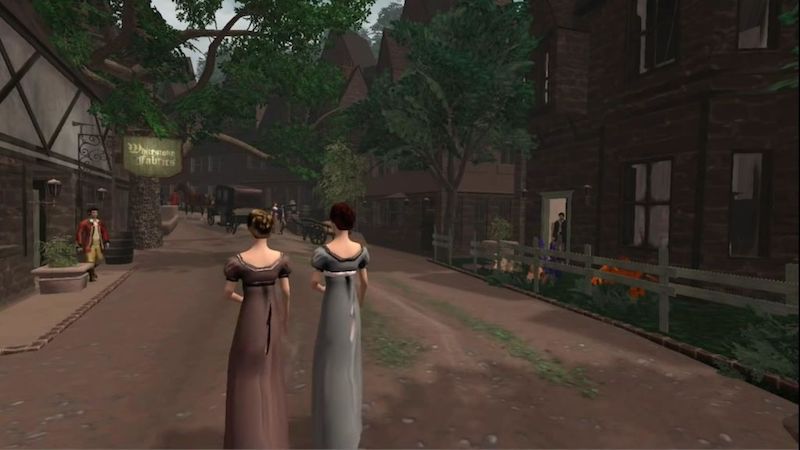 The Jane Austen multiplayer role-playing game Ever, Jane has shut down.

Alas, Jane Austen’s right: everything is to be got with money. Ever, Jane—the only Jane Austen-themed MMORPG (massively multiplayer online role-playing game)—has announced that due to a shortage of funds, it is shutting down. Created by Judy L. Tyer and Turn Productions, the project was originally Kickstarted for $100k in 2013 and was meant to receive a full launch in 2020 after a series of betas, but as 2020 . . . you know, happened . . . Ever, Jane’s launch was postponed and then canceled entirely.

This is a loss, despite the graphics—for Ever, Jane was fairly unique in the world of MMORPGs. Ever, Jane looked a lot like other MMORPGs, but replaced more traditional fantasy elements with Regency-era stylings: an inventory of bonnets instead of swords; three buttons to curtsy specific ways; character stats of Status, Kindness, Duty, Happiness and Reputation. (What about Sense, I say? What about Sensibility? What about Pride? What about Prejudice? What about Persuasion? What about Love . . . and Freindship?)

Ever, Jane also had a niche but devoted fan base. Said one enthusiastic Ever, Jane player to The Guardian, “My characters have experienced sweet and tender poetic courtships, hot seductions, shame and subtle triumphs. They’ve loved in secret, made calculating connections and stupid mistakes in the name of friendship.” And in a way, haven’t we all?

The final missive from the Ever, Jane Facebook account communicated that the game was for sale, so if any wealthy benefactor wants to step in, now’s your moment. And if the game doesn’t get saved—well, I guess there’s always screen painting.