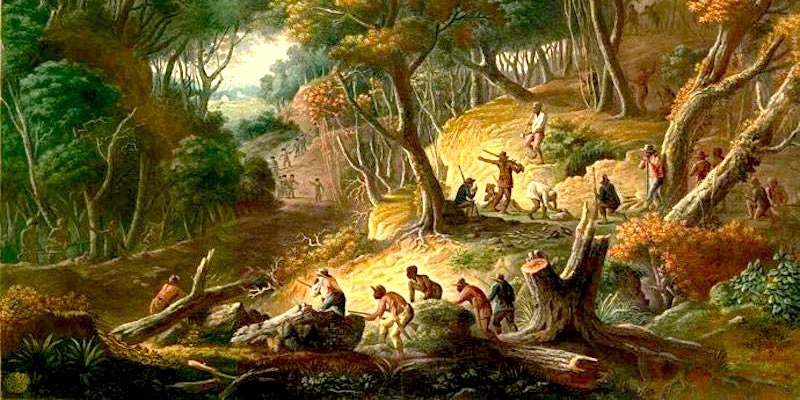 Only the plotters truly knew if their plans had called for a general uprising from the beginning. The colonists were guessing based on evidence garnered from torture, and historians have little more to go on than their speculations. Were the events in St. Mary’s, Kingston, St. Thomas in the East, and Westmoreland part of a general insurrection?

Something important is at stake in the answer to this question. Historians sometimes view slave-conspiracy trials as evidence of panic, projections by slaveholders upon hapless victims. Another perspective casts the slaves’ actions as mostly reactive responses to immediate circumstances and opportunities, rather than as the outcome of careful organizing. By contrast, the first named historian to interpret Tacky’s revolt, Edward Long, agreed with his fellow colonists that the rebellion had been carefully planned:

These circumstances show the great extent of the conspiracy, the strict correspondence which had been carried on by the Coromantins in every quarter of the island, and their almost incredible secrecy in the forming of their plan of insurrection; for it appeared in evidence, that the first eruption in St. Mary’s, was a matter pre-concerted, and known to all the chief men in the different districts; and the secret was probably confided to some hundreds, for several months before the blow was struck.

For Long, Tacky was the “chief man” at the head of the conspiracy. But Long’s account is an unreliable guide. Most importantly, he offers an erroneous chronology of events. Wanting to show an island-wide conspiracy, he depicted the events in St. Mary’s Parish as simultaneous with later events in Westmoreland, extending the timeline for the St. Mary’s uprising and making it appear to last well beyond the Westmoreland insurrection. At least one detail of the account makes this misrepresentation seem willful. Long states that it was Admiral Charles Holmes who dispatched the naval vessels to the north side of the island, despite the fact that Holmes did not arrive at Jamaica until May 13, weeks after Tacky was killed and the rebels had dispersed. Long surely knew this, but distorting the sequence of events in this way had the effect of making the whole affair seem that it was indeed Tacky’s revolt.

This theory gave the insurrection an identifiable scapegoat, whom Long could blame and belittle all at once. Acknowledging Tacky as a “young man of good stature, and well made,” he called him “handsome, but rather of an effeminate than manly cast.” Mocking and demonizing black sexuality was an important part of establishing racial hierarchy, and Long hastened to add that Tacky “had flattered himself with the hope of obtaining (among other fruits of victory) the lieutenant governor’s lady for his concubine”—that lady being Edward Long’s eldest sister. In Long’s estimation, Tacky’s elevation stemmed not from his leadership abilities or military experience but from his supposed resemblance to “some favourite leader of their nation in Africa.”

Tacky’s Revolt by Vincent Brown has been shortlisted for the 2020 Cundill History Prize.

Most likely, Tacky had himself been a leader in Africa, but for Long this was merely a sign of Coromantees’ credulity. He compared Tacky’s followers to some Africans who had once encountered the bronze statue of a gladiator erected on a local plantation, which “the Coromantins no sooner beheld, than they were almost ready to fall down, and adore it.” With Tacky at the head of uprising, Long had devised an intelligible narrative of the violence that conveniently discounted the strategic implications he most feared. According to him, the uprising resulted from a concerted effort, but it was doomed by Africans’ intrinsic faults.116 Yet, as he knew, from the attack on Fort Haldane to Tacky’s death in the rocky valley upriver from Downes’s Cove, “Tacky’s Revolt” lasted only a week.

With each successive discovery of new unrest, the slaveholders grew more fearful and bewildered. Suddenly the uprising seemed to be happening everywhere at once.

What explains Long’s desire to subsume the entire rebellion within a chronology that elevates the primacy of the events in St. Mary’s? Other sources, too, conspired to highlight the importance of the earliest clashes. The April 14 “Letter from a Gentleman at St. Mary’s” was the first and only coherently plotted account; the ones that followed display the irregularity and confusion of the colonists’ predicament. Dread governed their experience. By May, they were growing wild with fright as they ginned up the docket of African savagery. It is difficult to tell which stories came from captured rebels and which sprang from slaveholders’ imaginations, especially when the specter of cannibalism appeared in print. Colonists read that the rebels at Ballard’s Valley “cut off the Overseer’s Head, put his Blood in a Calabash, mixed gunpowder with it, and [ate] their Plantains dipp’d in it, as they did by every white Man they killed: In short, their savage Barbarity can scarcely be paralleled.”

If there had indeed been a blood sacrifice at Ballard’s Valley, this report made it seem as if the rebels were taking some holy communion, with bananas instead of bread. The story made the sacrament all the more heinous by comparing the Coromantees to Catholics—Protestant Britain’s foremost global adversaries—and contributed to the sense that the colony was besieged from within and without by enemies at once familiar and strange. With each successive discovery of new unrest, the slaveholders grew more fearful and bewildered. Suddenly the uprising seemed to be happening everywhere at once. The shocking reminder that power did not guarantee security drove colonists wild with fear.

Over the next several weeks, lasting into July, they discovered several more conspiracies. In the commercial capital, colonial officials deepened their investigation into the circumstances surrounding the war-token mahogany sword. They learned that Kingston’s Coromantees had rallied around a woman named Cubah, whom they elevated “to the rank of royalty” and dubbed the “Queen of Kingston.” Like other Africans, she claimed territory for herself and her followers in the knowledge that the boundaries of her dominion were drawn more by peoples’ loyalties than by land surveyors. At meetings “she had sat in state under a canopy, with a sort of robe on her shoulders, and a crown upon her head,” adopting the “paraphernalia of power” she might have known on the Gold Coast. Upon this intelligence, the government seized Cubah and ordered her to be transported from the island. In the Vale of Louidas in St. John’s Parish, Coromantees belonging to the speaker of the House of Assembly, Charles Price, “had agreed to rise, ravage the estates, and murder the white men there.” Three people familiar with the plan betrayed the rebels, and the “ringleaders were taken up, and upon conviction, executed; others, who turned evidence, were transported off the island thus the whole of this bloody scheme was providentially frustrated.” More plots were afoot in the parishes of St. Dorothy’s, Hanover, and Clarendon, where Edward Long owned his estate. Throughout this time Henry Moore kept martial law in effect, and the military remained on the march all over the island.

Fear transported the slaveholders into a delirious fever dream from which they would not soon recover. Possibly the experience of frightened alarm during the uprising sent some of them into a fugue state, in which linear temporality had lost some of its purchase. They had lost the plot. The narrative they pieced together at the start of the rebellion represented the most linear description they could manage, until Long sat down a decade later in London to reconstruct the sequence. Partly for this reason, and partly because of events that occurred later in the 1760s, the St. Mary’s revolt established an enduring narrative pattern, providing an intelligible origin and knowable characters, with the colonists’ actions bending a discernible story arc from beginning to end.

Fear transported the slaveholders into a delirious fever dream from which they would not soon recover.

The slaveholders were paranoid, and their slaves really were out to get them. Sometimes, these two facts could exist independently; the events of 1760 knotted them together. The causes of the insurrection were probably more broadly distributed and far more contingent than Long and the other slaveholders knew. Even so, whether or not these revolts were the result of a single grand design, they were not disconnected from each other nor merely opportunistic. The rebels coalesced around affiliations of language, regional identification, and military verve. If each uprising had its own inspiration, each also took careful account of local conditions, potential connections, and broader opportunities. In St. Mary’s, the path of the insurgency strongly suggests a defined objective: control or destruction of the commercial zone along the rivers. Yet if what happened in St. Mary’s parish could be called Tacky’s Revolt, it was only one conflict within a larger war, an unfolding uprising itself encompassed by wars within wars.

In the cascading series of events initiated by the rebels in St. Mary’s, we see how African militancy derived from the entanglements of empire, trade, and war across the Atlantic. Tacky’s Revolt was smaller and less significant than Long and subsequent historians have supposed only because the slave war it advanced was larger and more consequential. “A more dangerous or troublesome Affair I was never engaged in, in all my life,” wrote Zachary Bayly about the St. Mary’s insurrection. And still the Coromantee War was closer to its beginning than its end. 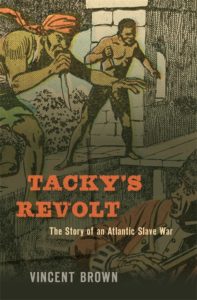 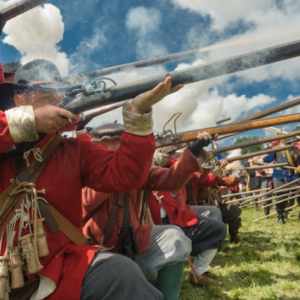 Today, the Sealed Knot is a group of harmless obsessives dedi­cated to historical re-enactments of Civil War battles. They...
© LitHub
Back to top