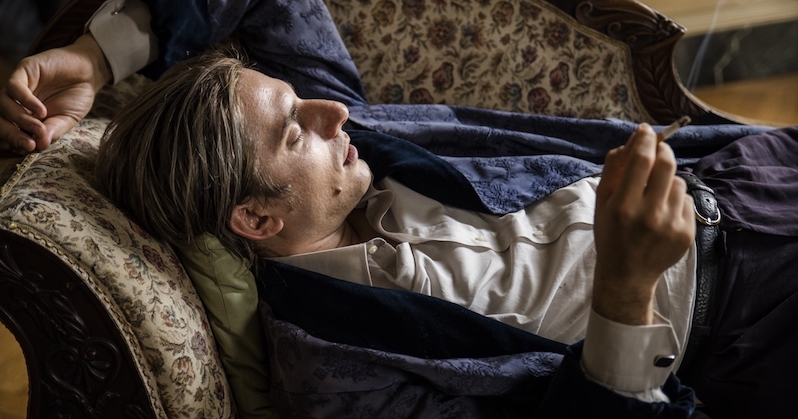 The Italian adaptation of Jack London’s Martin Eden is a dreamlike, Romantic epic.

Near the end of Pietro Marcello’s Martin Eden, the 2019 film adaptation of Jack London’s 1909 novel, released today in the US, a withered Luca Marinelli as Eden tells a bemused audience, “The writer Martin Eden doesn’t exist. He is only a product of your imagination. He’s actually only a hoodlum and a sailor. I’m not a legend. Stop trying, you can’t screw me. You will never screw me!”

It was an unlikely outcome. London’s semi-autobiographical story originally charted the short life of an uneducated sailor in Oakland, California who abandons his working-class job to become a learned man, a writer. Eden’s decision is nominally instigated by the beautiful Ruth Morse, who comes from a bourgeois family. If Eden is to marry her, as both he and Ruth evidently desire, he must first pursue his education.

By the time London wrote Martin Eden, the author was in his early thirties and had already published The Call of the Wild, The Sea-Wolf, and White Fang (the latter, incidentally, was the first novel I was introduced to, and the first I loved). Sick, ambitious, and spiteful of fame’s distractions, London set out in the South Pacific on a boat he built, writing the book during a bitterly difficult voyage.

It wasn’t immediately clear to me whether Marcello’s Italian adaptation would be a work of earnest kitsch. I confess that I feared it would be a slightly fawning piece of Americana. This had nothing at all to do with the filmmakers but rather my own suspicion of novel-to-film adaptations in general, and particularly those that uproot the original narrative and graft it onto different locales. But Marcello’s fine translation of London’s work flourishes in its Italian setting, casting Eden as a Neapolitan seaman-turned-failed foundry worker (this, at least, before he attains his ultimate success).

The film unfolds like one of the classic neorealist epics of the mid-20th century, filled with interpolated, dreamy footage that almost constitutes an unspoken storyline of its own: flashbacks of a young Eden writing out his name or dancing with his older sister, ships tipping over, trains speeding up and down the Italian countryside.

Martin Eden can’t be much without a strong anchor, and it is the big-eyed Luca Marinelli (recently featured in the Charlize Theron-helmed feature, The Old Guard) who makes a good movie into something remarkable. Over more than two hours, Marinelli develops Eden from a feisty, emotional and somehow still repressed dreamer into a man not that much older but so severely disillusioned and diseased that he appears to age on an accelerated timeline. The character of Ruth has become Elena in Marcello’s version, played by an understated Jessica Cressy.

The literary critic Sam Baskett, writing of London’s novel, observed that “On one level, Martin Eden, written at a crisis in London’s life, is a not altogether conscious confession of a variety of personal failures, including his failure to become the iconoclastic yet affirmative writer he had expected to be.” One of the titles London had originally conceived for the book—Success—was a wry jab at the sort of materialist excess that was concerning the author at the time. Though never quite ashamed of his origins, Eden rejects the tiresome life of the underpaid laborer and embraces bookishness as a new adventure to be had. He reads and reads and, through the work of Herbert Spencer, Charles Baudelaire, and others, becomes in many ways more attuned to reality than Elena and her insufferable family, who don’t really seem to know what to do with their affluence.

As Elena, Cressy does a wonderful job taking offense at the impositions of the world beyond her gated estate. When Eden is unfairly represented as a socialist in a news article (he is, in fact, a fetishist of individualism who regards socialists as a harmful ideological bloc), Elena leaves him. She, along with Eden’s sister, never much cared for his somber writings on poverty and inequality anyway. That kind of thing didn’t sell because it brought no joy to people’s lives. After a series of failures and returned manuscripts, however, Eden’s bombastic writings do catch a publisher’s eye. As his profile increases, the qualities that make Eden compelling as a singular figure are the same traits his unscrupulous publisher converts into a commodity, a brand. When he is clearly sick and suffering, the publisher attempts to force a publicity trip to the US. Eden only makes it to a local event, where he delivers the lines that opened this review.

By now Elena has come back, begging for marriage. “I betrayed your love, but now I want to live it,” she tells Eden. And yet when he curses, Elena urges him to moderate his language, drawing an ironic laugh. “You’re bothered by the swear words, as always,” he spits. He had wanted so much to please Elena and her family (to be “a dog by your side!”). A life full of constant disappointment and deficient ideals leads Eden into the film’s final sequence, as ambiguous and weighty as the controversial conclusion of the novel.

Martin Eden would have made for an interesting watch at any point in time, but it is uncannily poignant in this moment, when many of us are reevaluating our relationships to work and pleasure. More to the point, the film is about the life of the writer, asking whether it can ever be a good in itself. Whether this life can escape the profit motive is one question, but the movie is most interesting when it prompts us to consider why we care for certain trappings and lifestyles. When war looms, when death encroaches, and when love proves fickle, what is there for the pen (or typewriter) to defend against?